THE SHORTNESS OF MEMORY 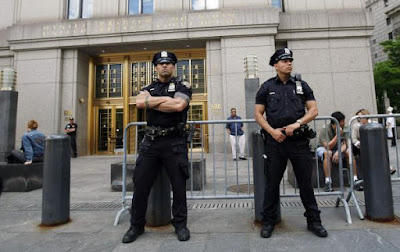 (Monday August 8, 2016 500 - Pearl St., NYC) Perhaps you had to have lived through those brutal years on the streets of our inner cities.  The 1980’s and early 1990’s were the “War Years” as the illicit drug trade in all its violent manifestations infected neighborhoods from coast to coast. In New York City by 1985 the “crack epidemic” was at full throttle as the highly addictive “rock” form of cocaine hit the streets at a fraction of the coast of the powder form of cocaine.  With this epidemic came waves of violence as drug traffickers fought endless turf battles that had blood running in the gutters and local residents held captive in fear of their own streets.  The Law Enforcement Community (LEC) was in some ways ill-prepared for the carnage and raw violence that the crack trade was becoming notorious for.  From the Federal Drug Enforcement Agency (DEA) to local Police Departments it often felt like a losing battle.  Drug traffickers and their armies of street dealers had brought the weapons of war to our streets in the form of high-powered firearms, assault-style weapons, “Cop Killer bullets”, and a “take no prisoners” approach to their particular brand of urban warfare.

As the body counts rose and more and more innocent bystanders found their deaths at the hands of those foot soldiers occupying our streets, the Criminal Justice system was being derided as ineffective and simply not up to the challenges of this modern drug war.  In turn the State and Federal Courts began to prosecute very aggressively as Law Enforcement began concerted efforts to regain control block by block, corner by corner, one neighborhood at a time.  These times required new tools to be made available for those in Law Enforcement as well as on the prosecutorial side of the fight.  It was slow going but eventually the corner began to be turned as the Police interdicted more effectively and the Federal Courts enacted tougher sentencing guidelines including “mandatory minimums” for some of the most egregious perpetrators.

THE NATURE OF THE BEAST

Last Wednesday, August 3rd, President Obama commuted the sentences of 214 federal inmates including 67 who had been serving life sentences.  It was the largest number of commutations ever made by a President in a single day and brings his total to a whopping 562 commutations, more than the last nine President’s combined. He claimed that the majority of those offenders whose sentences he shortened had been convicted of “nonviolent drug offenses” and that many were the “victims” of harsh, “draconian” sentencing guidelines. That is quite a statement from a man who is a Constitutional lawyer whose adopted hometown of Chicago has been awash in unprecedented violence in recent months much of which is connected to the drug trade.

The term “nonviolent drug offenders” is in many ways an oxymoron.  The drug trade by its very nature is a violence filled enterprise. Yes, there are some among those serving Federal time who were caught up in the tough-minded sentencing of the 1980’s and 1990’s.  However, those tactics did not evolve in isolation; they were the direct response to the reality of the day.

Not many drug offenders wind up in a Federal penitentiary by accident.  No, not at all.  Most of those prosecuted under Federal statutes were “high level” traffickers who dealt in high volume distribution of an illegal product.  While any such “kingpin” may or may not have murdered a rival, a disloyal soldier, or a delinquent payer it is beyond doubt to believe they were not responsible for such violence.  Many of these offenders were prosecuted under the famed RICO predicates, the mechanism by which the Federal Courts can indict and prosecute individuals as part of a “criminal conspiracy”, a highly effective legal tool that has been an effective means to the ends of shutting down large and small drug rings.  What are now being classified by some and certainly by this President as “unusually harsh sentences” were clearly not seen in that light at the time they were imposed.  Yes, there is an apparent shortness of memory among those now clamoring for sweeping reforms to the Courts and in the prisons.  Those seeking such reforms are engaged in a dangerous brand of activism.  Obviously they did not live through the War Years.

AN EXECUTIVE KICK IN THE GROIN

The “Drug Wars” of the eighties and nineties were fought on many different fronts.  The DEA fought the smugglers on their own turf, often in highly covert paramilitary operations while Law Enforcement Agencies (LEA) coast to coast played rough games of cat and mouse often having no choice but to meet brutal force with brutal force. Many Federal cases took years of dogged investigation often at great risk to the Agents and Officers involved. The Department of Justice and the FBI recognized the scale and scope of the drug wars and had to adapt as they went.  It seemed as if the smugglers and dealers, the distributors and henchmen were always one step ahead of Law Enforcement.  In some ways they were.  Due to our body of laws, the rules of engagement, limited investigative powers in tools such as wiretaps, utilizing “confidential informers”, and the “burden of proof”, the LEC was often forced to fight these battle severely restricted by domestic laws and Constitutionally assured rights of the offenders.  But this is our system and despite the difficulties over imposed on the LEC, progress was able to be made.

The Courts were the true bludgeon available to make a concerted effort not simply to stem the flow of drugs on our streets but to punish those most responsible. These cases were meticulously assembled and presented by seasoned Federal prosecutors.  Now many of their efforts are being reversed in a casual way that seems to disconnect the crimes and criminals granted commutation of their sentences.   These were the people guilty of the deaths of unknown users, addicts, rival gang members and innocent people trying to carry out their lives in virtual combat zones.  There are no “nonviolent” members of a drug enterprise even if they themselves haven’t pulled a trigger.  As a member of a legally proven criminal drug conspiracy, guilt is equitable shared among all members except for those who flip and rat on their former “brothers in arms”.  There is no honor among thieves and many a guilty party turns to testify as part of a plea bargain or for the promise of immunity.

The cost in blood and death to members of the forces who valiantly fought the drug wars on behalf of the law, all the DEA agents, Police Officers and other members of the LEC injured or killed in the line of duty during those dirty years have suddenly received a big, swift kick in the balls from our President.  All the countless efforts made, all the take-downs, buy and busts, undercover operations, investigations, arrests and prosecutions of those in the drug trade have been in a way completely negated by this atrocious maneuver to grant clemency by President Obama.  What are the Officers involved in the arrest of these guilty parties who will soon be released to think?  How demoralizing is it that years after the fact an activist President frees an individual you had a part in having convicted?  There are more than a few demoralized, disgusted veteran LEA wondering aloud today about these commuted sentences.

Those on the side of jail and prison “reform”, inmate’s rights, vocal opponents of much of our Criminal Justice system, as well as President Obama assert that “this is a country of second chances”.  Everybody deserves a second chance”.  Even the most cursory review of those granted clemency last week reveals that each and every one of them had at least a second, third and fourth chance.  Some among these offenders were arrested in the possession of a firearm which automatically enhances whatever other criminal charges levied on them.  These are repeat offenders some with criminal records that stand as proof of lifetimes of criminal activity.  Not many offenders make it to the federal courts and very, very few end up in federal custody by virtue of wrongful prosecution or some alleged nefarious activity on the part of the Courts.

In the last few years the political Left has latched on to the concept of jail and prison reform as a “cause”.  Yes, our jails and prisons are overcrowded, underfunded, understaffed, and ill-equipped to deal with some of the pre-existing mental health issue many inmates suffer from.  The introduction and successes of the “for profit prison industry” has had a double-edged sword effect on incarceration and the management of correctional facilities.  But that is also a product of the past, that past when the drug wars raged and blood ran in our streets.  All of this hand-wringing and second guessing merely undermines the efforts of the entire LEC even at a time when violence across America is on the rise, premeditated attacks on LEO are becoming dangerously commonplace, and some of our larger cities are seeing levels of gunfire and gang-related death reminiscent of the eighties and nineties.  If anything these times call for more aggressive prosecution on every level of the criminal justice system.  Clearly this is not the time to have our Federal government sending mixed signals to the criminal class.

We’ll have to watch and wait to see which of these newly freed convicts kills someone upon their release.  It is not a proposition of “if”, it is a fact of “when”.

Posted by Brooding Cynyc at 5:17 PM