HIS ACCOMPLISHMENTS AND CONTRIBUTIONS
ARE REAL WHILE LEGACY IS MIXED 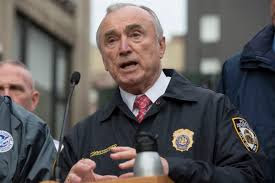 TAGS: NYPD, COMMISH BILL BRATTON, NYC & THE POLITICS
OF POLICING, OPINIONS VARY, MIXED LEGACY BUT REAL
PROGRESS, OFTEN POLARIZING TO THE PUBLIC AS WELL
AS TO THE RANK AND FILE, CHIEF OF DEPARTMENT JIMMY O’NEILL

(Sunday August 7, 2016 1PP, NYC) New York City is one of the most celebrated and unique cities on the face of the planet; it is the United States’ most famous, city, the number one tourist destination worldwide for the 17th year in a row. It is the Safest Big City in America and has been for over a decade. It is a city of international renown, a cosmopolitan urban center of diversity and extremes, dreams and possibilities, the good, bad and ugly coexist shoulder to shoulder and somehow in all its complexity it works.  It is the world center for fashion, entertainment, finance, media and the arts.  It is I many ways a country unto itself.  The Great Metropolis is the home of the country’s, if not the world’s most elite urban Police Department: The NYPD is the “gold standard” by which all other Law Enforcement Agencies are compared and measured and they continue to remain in a class by themselves.  The men and women of the NYPD are the most professional, best trained, and most prepared for any circumstance and contingency.  Its Specialized Bureaus, Commands and Units possess unparalleled training, experience, and expertise.  The 34,000 members of the NYPD keep law and order in the city of 8.5 million residents as well as the thousands who come into our City daily to work, visit, travel and otherwise take advantage of all we have to offer.

Given the nature and status of our City and Police Department, it is easy to understand how difficult the position of Police Commissioner can be.  New York City is probably the most political city in the country.  Everything here has political implications, ramifications, special interest groups on all sides of every issue, a wealth of competing voices of varying virtue clamoring for attention.  It is this wild mix that adds spice to the melting pot while complicating virtually every aspect of life here from the most mundane to the most prominent.  The modern Office of the Police Commissioner requires its inhabitant to be as much a maven of urban policing as an astute politician able to navigate the shark filled waters in City Hall, One Police Plaza, and the thousands of small interconnected, seamlessly conjoined neighborhoods; the ethnicities, racial composition, multitude of religions practiced, languages spoken, customs and traditions observed that collectively constitute our City.  It is, to make a gross understatement, a difficult job.  It can often be a thankless job because our population of 8.5 million means there are at least 8 million critics.  For all the scrutiny the Police Commissioner is subject to by all factions of the populace, press, and politicos, he is also evaluated on a continual basis by the very men and women he nominally commands.  These are perhaps his greatest critics.

After serving as the Police Commissioner for the last 31 months, Bill Bratton announced last week that he will be stepping down in September to pursue a position in the private sector.  His surprise announcement garnered the usual amount of coverage and commentary and has been the fodder feeding discussions in precinct houses and Cop bars across the five Boroughs.  Bratton, like most Commissioners leaves no room for ambiguity; you either love him or hate him; one would be hard to find a Cop who is ambivalent about any Commissioner but with Bill Bratton in this his second tenure as NYPD Commish, there is no middle ground.

The New York City Bill Bratton returned to serve in 2014 was a vastly different place then the one he left in 1996 due largely to the effectiveness of the strategies and tactics he’d implemented during his 1994 to 1996 term under Mayor Giuliani.   Not without critics and controversy, his employment of “CompStat” and patrolling methodology based on “The Broken Windows” theory was precisely what the City needed in 1994.  So effective were those methods that the NYPD was able to take on new challenges particularly in the post 9-11-01 era under Ray Kelly.

Upon his return to NYPD Bratton soon realized that his mission would be more challenging in many ways serving in the Administration of a “Progressive Liberal Mayor” who had made campaign promises to every special interest group, voting bloc, minority community, activists, and agitators of every stripe that would prove nearly impossible to meet even in the most superficial manner. Bratton was forced by Mayor DeBlasio to be more of an active politician than he’d ever wanted or cared for.  After a very rocky start which we were never shy about reporting on in this space (and ultimately led us to be banished to FB jail for several months because of a cowardly rat bastard’s complaints).  It took the better part of his first year in 1PP to gain his footing but once he did, he was able to arguably direct the Department effectively although often his popularity among the MOS was dismal.  Such is the plight for the person who occupies that Office.

Perhaps Bratton’s greatest contribution to the NYPD will manifest itself in the Department’s future.  As his hand-picked replacement Bratton tapped the Chief of Department James O’Neill.  Chief O’Neill has been with NYPD since 1983 and at every level during his impressive assent from a patrolman to the upper echelons and now the Commissioner’s Office has been characterized by his honesty, integrity, fairness and innovative thinking.  He is by all measures an old school “Stand-up Guy”, a “Cop’s Cop”.  We wish him nothing but the best when he takes over for Bratton in September.  Indeed, one of Bill Bratton’s last decision’s as Commissioner may prove to be his choice of Chief O’Neill as his successor.

A great read, this. I wondered how Bratton would be perceived over time and I am glad to see a full and nuanced description. He may not have had the charisma of Ray Kelly, but I thought of him as an old workhorse. Tough, plodding, still reliable and knowledgeable about his route. I wonder if he did not, behind the scenes, ground DeBlasio somewhat, but that's an optimistic view. Perhaps I mean to say DeBlasio needed a tough guy to stand up to him and I hope the next commissioner will do as well. I'm curious to see if you think I am right or wrong on that :) - DMJ