NYPD WILL COVER THE MARATHON LIKE A
BLUE BLANKET 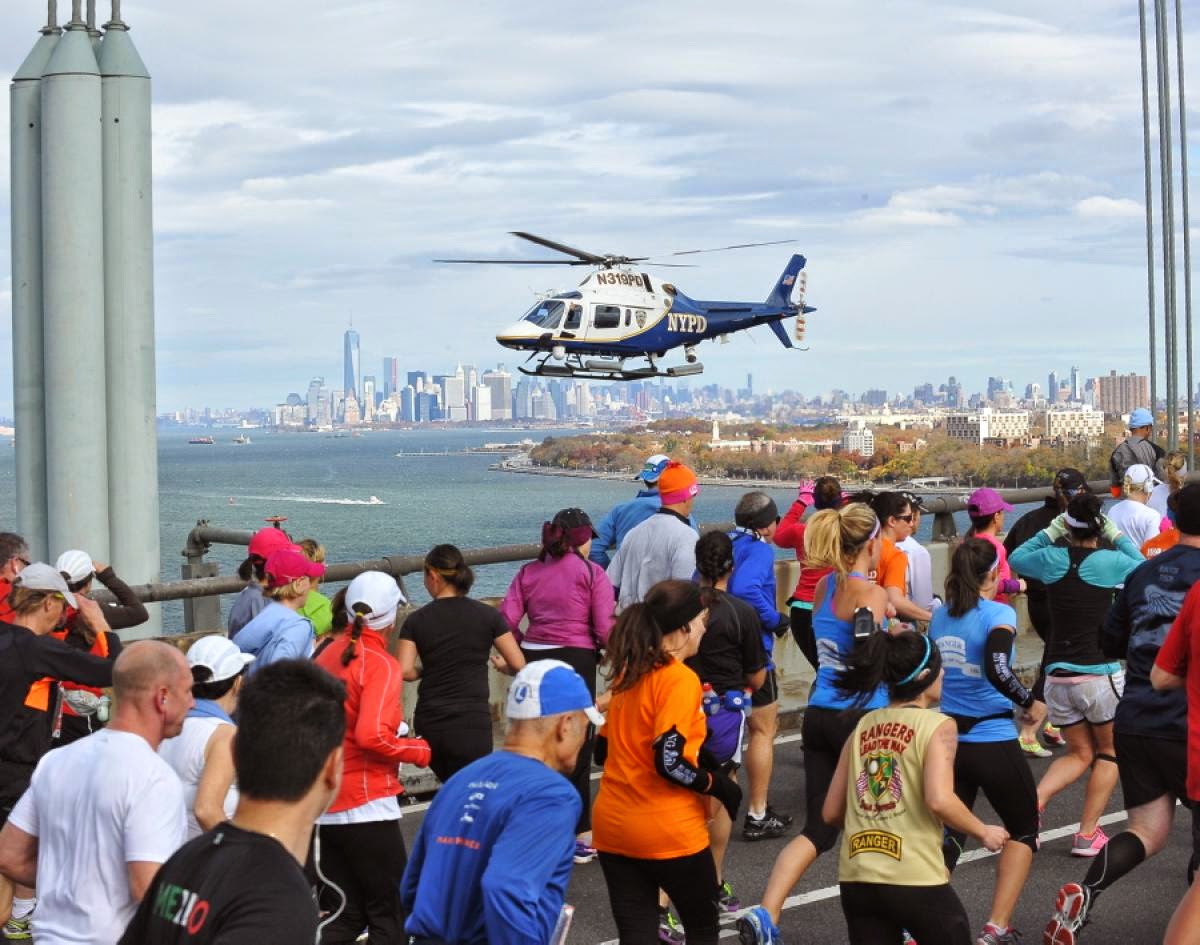 (Saturday, November 1, 2014, Central Park, NYC)  The broad blue finish line for tomorrows running of the 44th New York City Marathon was painted days ago.  Approximately 50,000 runners will line up at the Staten Island side of the grand span of the Verrazano-Narrows Bridge and run the 26 mile course that weaves its way through all Five Boroughs.  The race course will be lined along the way by thousands of spectators and will attract larger crowds at key points along the way.  As with every major mass gathering since September 11, 2001, security is the top priority and the NYPD is taking measures to enhance its already robust security apparatus.  No other Police Department in the country, perhaps the world, is more experienced and better prepared for events such as this but, after the Boston Marathon bombing on April 15, 2013, security for this year’s running will be even more stringent than last year.

In our post – 9/11/01 world security has become the top priority for the NYPD and agencies in other cities most notably Washington, DC.  All mass gathering are now approached as mass casualty possibilities and every measure to ensure crowd safety from the utilization of advanced technology to the low tech basics of policing are employed.  Our City in many ways has become “Surveillance City”.  One can hardly escape the watchful gaze of the over 24,000 closed circuit surveillance cameras operated by the NYPD and the hundreds of thousands more used by private companies and properties.  Some bristle about this state of affairs claiming their loss of privacy but, at least for the time being that is a relatively modest sacrifice New Yorker’s have to accept.  Our City is, after all, the primary “target – rich” environment for terrorists of every kind as well as those individuals who act alone either out of newly found identity with a radical cause or mental illness; in some cases it is a volatile combination of both.

Recently we have seen individuals breech the White House perimeter and ax-wielding men attack Police Officers in NYC and DC. Last week in Ottawa Canada a lone gunman entered the Parliament building there killing a uniformed guard before being shot dead himself.  Whether or not they are self-proclaimed “jihadis” is of little significance.  What is important is the increasing number of attacks on Law Enforcement Officers (LEO’s) many of which have been fatal.  There may be a “copy-cat” element to this disturbing trend and clearly there is no way possible to identify and monitor every individual who may lash out at the most visible representatives of governance, uniformed Police Officers.  This year we have witnessed several incidents where Police Officers were ambushed in places from Las Vegas to Eastern Pennsylvania.  Based on the raw statistics covering the last 10 years, a Member of Service (MOS) of the Law Enforcement Community is killed every 58 hours in this country.  Just in the last two weeks we have seen a troubling escalation of violence on MOS with 16 Officers being killed by armed assailants in just eight days.  This is truly an incredible number when one takes a minute to consider it.

There will be 4,000 NYPD Officers specifically assigned to the marathon.  This number does not necessarily include the highly skilled MOS of the Emergency Services Unit (ESU), the 20 craft that will be patrolling the waters around NYC by the NYPD Harbor Unit as well as the “eyes in the skies” of the Aviation Unit.  There will be a large uniformed police presence as well as security measures employed that will be hidden from the public’s view.  Suffice to say, there will be a heavy blanket of security for the marathon and runners as well as spectators should go out and enjoy the spectacle of it all.

Posted by Brooding Cynyc at 3:25 PM