NYPD PREPARED FOR ANY THREATS 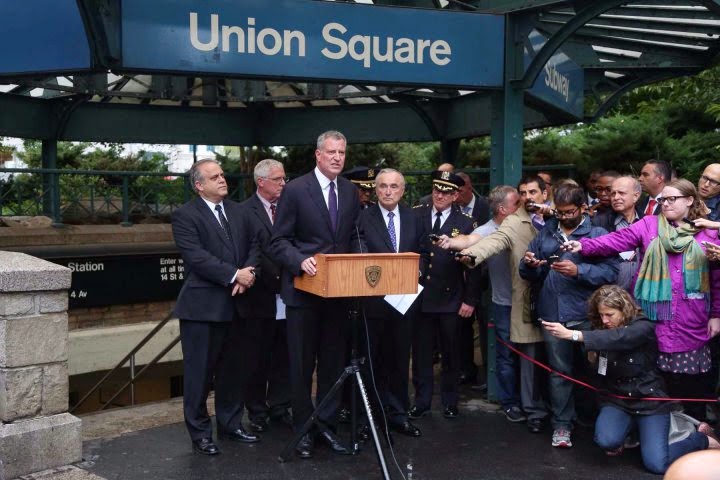 
ISIS is planning a terrorist attack in the city's subway system on Sept. 25 at Union Square.
Photo: Stephen Yang

(Friday September 26, 2014, NY,NY)  Probably every neighborhood had one when you were growing up; mine did.  There was a kid named John and by 6th grade John was already over 6 feet tall, weighing about 220 pounds and possessed an athletic gracefulness that belied his size.  He was also amazing strong but John was just a little “slow” as was said in those days.  He could have beaten any one of us into a bloody pulp but we always managed to elude him when he was at his angriest.  We could get John to do things for us and, the tacit agreement was that he would leave us alone.  But something always happened, someone always went too far and John would suddenly be on the war path.  No one is certain whatever happened to John.  His family relocated to another neighborhood in The Bronx and we never saw him again.  I was always marveled by just how much crap he would take from us, how much teasing and practical joking before he reached his limit.

In some important ways the United States and our leaders have become like John.  They could decide to bomb specific locales in the Mideast back to the stone age, they can implement all sorts of sanctions, embargoes, as well as more aggressive diplomatic and financial actions but they seem to spend far too much time wandering around as John.  The fundamental problem having the USA as John is that we are allowing ourselves to be lead around by the nose; countries and influences from the other side of the world and the “leaders” in countries including Saudi Arabia, Iraq, Syria, Turkey, and a few of the other “Arab Nations”, have us dangling like a cheap puppet on a string, a string of their control.  It is a troubling time in America to recognize that many in the community of nations do not have the respect they once did for the USA.  Yes, the moral high ground was squandered along with any lingering good will afforded us after 9-11-01 by the Cheney/Bush debacles, but how we got here, to this particular fragile, thorny time, is not pertinent to this discussion.

What is however pertinent is that this Administration seems to believe that they are the puppet masters, that they are pulling the strings orchestrating a clumsy geopolitical fandango where no one knows the rhythm.  To be sure we have not had an effective Department of State since the days of General Colin Powell.  President Obama bears the sole responsibility of choosing Hillary Clinton to be the Secretary of State and only compounded that grievous error when he appointed long time Senator, John Kerry, as her replacement.  Essentially we have been functioning in the world devoid of a consistent, articulated foreign policy and the confusion it allows to seep through the cracks of international relations simply breeds more of the same.

In a startling act of role reversal, the new Prime Minister of Iraq, Haider al-Abadi, warned President Obama that his “intelligence” service had uncovered a plot and that it was the work of extremists originally from the U.S. and France who have been fighting for ISIS. The Prime Minister cited “credible sources” and offered such details that the alleged plots will be strikes on the subway system in NYC and Paris. There is no small irony in this claim.  After over 10 years of combat in Iraq they have a new Prime Minister who is “sharing” intelligence with the United States and France?  Hard to believe but one can imagine why.  With Haider al-Abadi comments he struck the notes most likely to attract attention from the US and France.  With his own battle ravaged country falling apart, he would like to see nothing more than a full out United States led military effort to stabilize Iraq.  Yes, he is pulling the threat of terrorism string.

Since the US led coalition began their latest air campaign designed to “systematically degrade and destroy” ISIL, there has been more intrigue behind the curtain behind which the puppet masters work the strings.  In the wings of that hidden stage are the Saudis, the Turks, the Kurds and of course our most demanding puppet master of all, Israel.  Each of these countries would tell America anything that would instigate a wider war in the region.  It does not take a scholarly diplomat to see what is going on.  Iran is also issuing statements aimed at President Obama to remind him of their presence and influence in Iraq.  Iran was the only real “winner” in the war we fought so valiantly against formidable insurgents and foreign fighters in the towns and cities of Iraq.  Iran has too much of a vested stake in Iraq’s future to allow the Islamic State (ISIS or ISIL) to hold huge swathes of land, control refineries and pipelines and otherwise stand as an “occupying presence” just as the long suffering people of Iraq were beginning to see light at the end of that tunnel of atrocities, death, and sectarian and religious fighting.

When President Ronald Reagan had successfully negotiated and arms treaty with Michael Gorbachov, the Premier of the USSR, he made a famous comment regarding how the disarmament treaty would be enforced.  Reagan said the only way to accomplish such a historic undertaking was to “Trust But Verify”.  And it was that simple coda that saw us through to the end when the USSR imploded on itself and stood as proof positive that American capitalism was far superior to Soviet socialism.  In the world today, if we are to have any reliable partners in our fight against the Islamic State, al Qaeda, and all the mutant terrorist groups that have emerged in the last 13 years, we must trust but verify.  This comes into play especially when we are fed “intelligence” from countries that, until very recently, wanted nothing to do with us.

The Saudis have always warranted having a watchful eye aimed at them.  They notoriously play “both sides of the street” as when they banished bin Laden yet allowed him to operate from Afghanistan with access to his sizable fortune.  The Saudis have blocked some of our law enforcement agency’s access to sites where terrorism occurred on their homeland yet have showed a defiant intransigence when asked for military support which is additionally infuriating because we have spent decades and trillions of dollars to train, equip and support the Saudi military.

What we as a City and as a people came to realize in the aftermath of 9-11-01 was that we are alone; we have to do for ourselves what needs to be done.  Foreign allies have no problem assisting in humanitarian efforts, they are willing to provide “fly over” rights, and some have permitted us to use airbases on their soil.  These are all important contributions.  But, until areas of the fiercest fighting have Muslim faces staring down the Islamic State and other groups, we will always be fighting from a point of disadvantage.

Hopefully this bombing campaign over Iraq and Syria yields measurable results in short order.  The term “mission creep” is already being spoken in hushed tones in the corridors of the Pentagon. 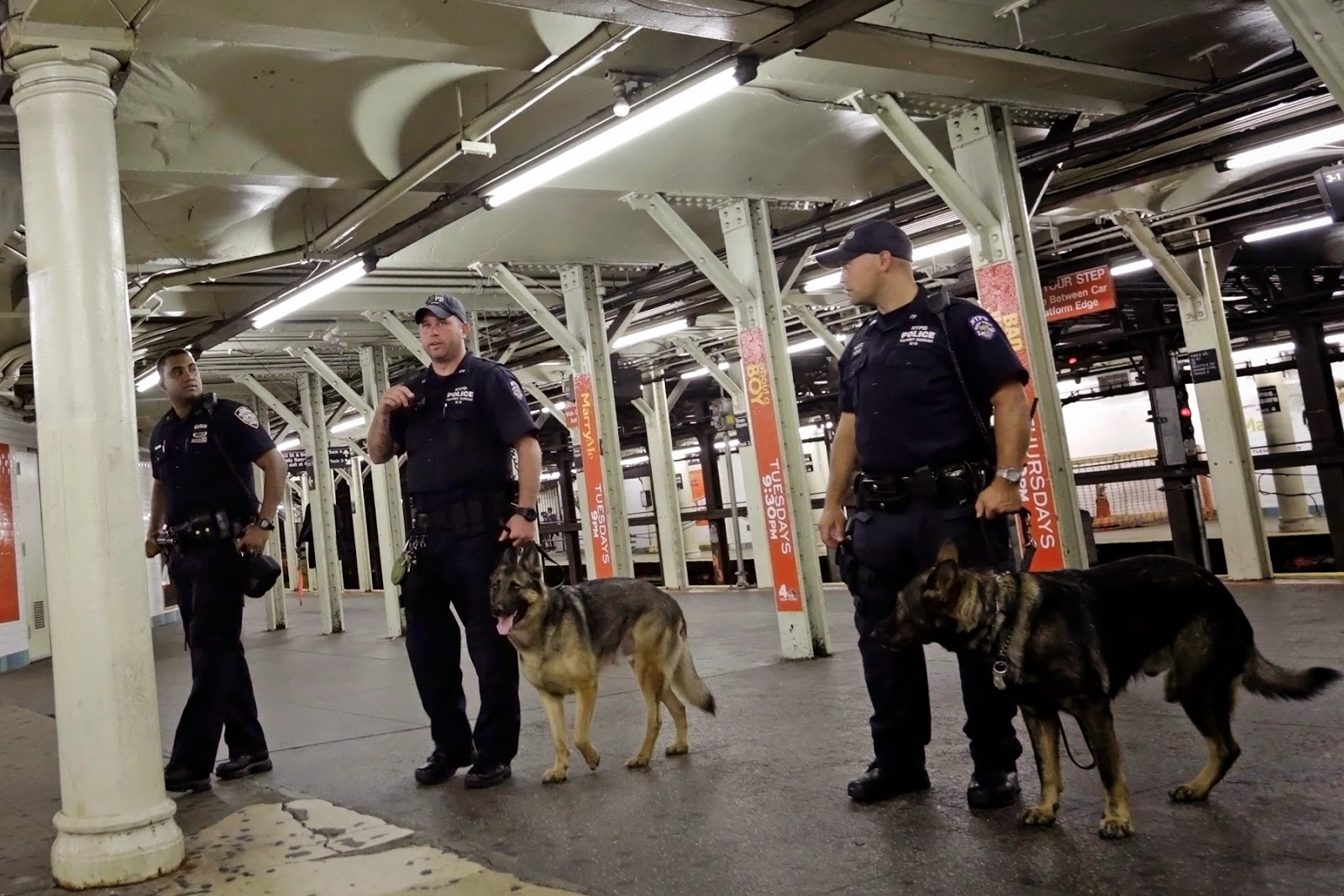 
New York City and all our elite services from FDNY, PAPD, NYPD, Intelligence and Counter Terrorism Bureaus and all the other special units will keep us safe.  We really have no use for “intelligence” from the Iraqi Prime Minister.  We can just send him a note, “Thanks but no thanks”.

Posted by Brooding Cynyc at 3:40 PM