NYPD MOS WOULD LIKE TO KNOW
WHAT IS IT EXACTLY THAT YOU ARE GOING TO BE DOING? 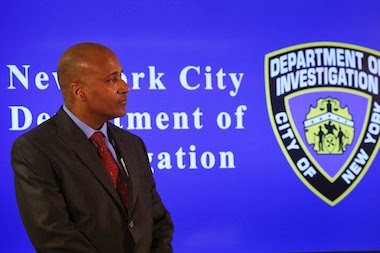 PHILIP EURE THE FIRST INSPECTOR GENERAL FOR THE NYPD.
DOES NYPD REALLY NEED AN IG?

(Monday March 31, 2014 19th Precinct,UES, NYC)  It is one thing to have a new Mayor struggling to get his Administration off the ground to be booed and jeered as he threw out the ceremonial “First Pitch” at Citi Field in Flushing Meadows earlier today, the home of the New York Mets. The boisterous reception Mayor de Blasio received was more a demonstration of New Yorker’s tradition and a mighty touch of Spring Fever; after a record breaking brutal winter that landed punch after punch on our City, it is finally Spring.

As the spectators at Citi Field made their thoughts known there was an equal amount, perhaps a much greater amount of jeering and booing in the locker rooms of NYPD’s 77 Precincts, 12 Transit Districts, 9 housing Police Serving Areas as well as in every special Unit throughout the Department.  Their expressions of dissatisfaction and frustration could not have been any further removed from the new Mayor’s growing unpopularity.  The hue and cry within NYPD is in the creation of a new post, the position of NYPD Inspector General (IG).  There are so many important questions surrounding this newly created IG Position that most of the upper echelon in One Police Plaza, including the new NYPD Commissioner himself, Bill Bratton, are unable to provide any specifics as to the role this IG is expected to play in an organization that is tightly knit, steeped in tradition and already the most scrutinized Police Department in the United States, if not the free world.

The creation of the Inspector General position was passed by the NYC Council in 2012 and rapidly vetoed by then Mayor Michael Bloomberg.  The City Council was able to override the Mayor’s veto and the position was created.  Actually the current Mayor, Bill de Blasio had made the appointment of an Inspector General for the NYPD a central plank in his campaign platform.  The argument in those days surrounded allegations that a popular, highly-effective Police patrol tactic, “Stop, Question and Frisk” (SQF), condensed by its most vehement adversaries to simply “Stop and Frisk” was an abuse of power and inherently biased.  That shorter phrase became a rallying cry for activists in various communities who contended that the entire practice of SQF was akin to “racial profiling” and that “young African American and Latino men” were disproportionally at risk for SQF. Despite the fact that the crime rates in all categories continued to decrease in the last years when Ray Kelly was the NYPD Commissioner there was no absence of critics; then candidate de Blasio being one of the most vocal.  The self-appointed “activists” as well as several prominent clergymen serving minority communities convoluted the policy and practice of SQF as obviously discriminatory and their incendiary rhetoric only served to intensify increasing their constituents’ hostility towards NYPD.

Some forty or so years go the Rolling Stones famously sang, “You can’t always get what you want.  But if you try some time you  just might get what you need...” It remains one of the classics from the rock and roll days and it is as true an axiom as one might find in a philosophy text.  Standing on Park Row with the imposing edifice of One Police Plaza in front of you, you should have no doubt that as much politicking as policing is orchestrated way up on the 14th floor.  It is often a toxic brew and a dangerous combination of ingredients that are unnatural partners.  Every aspect of policing and securing the City of New York is analyzed, assessed, discussed, reviewed and approved and, there are times, some members of the brass are not pleased with the results.  Often they do not get what they want.  That alone is a good reason to keep politics as far away from actual day to day Law Enforcement.  Can you imagine if the NYPD Commissioner had to run for Office like thousands of County Sheriffs across the country do? The NYPD Commissioner is chosen by the Mayor of New York City and serves “at the pleasure of the Mayor”. That’s about as political as one might want that position to be.  However, this being New York City, the most famous City in America, if not the world, NYPD and whoever leads it is constantly subject to a level of scrutiny a lab rat couldn’t withstand.

Another old axiom that could have been posed to all those hundreds of thousands of NYC voters, a “broad coalition” was, “Be careful what you wish for. You just might get it”, and thus far they are now seeing what they wanted, what they expected may indeed not be anything close to what they’ve gotten, at least up to this point. As bitter at Mayor Bloomberg as they were and dissatisfied with Ray Kelly’s NYPD, they viewed the tall candidate with a supportive, assertive African American wife, as the man who really would “be Mayor for the entire City”.  As de Blasio faces every day all day the reality of the duties of his office and just how challenging a job it is, his supporters are already growing restive and feel disillusioned.  So, obviously, this is a good time to lift all their spirits and appoint an Inspector General to…what,…oversee the Commissioner?...Oversee the Internal Affairs Bureau (IAB)?...or is he the first inhabitant of an office that is not only redundantly redundant but also completely baffling to many  of the “old hands” in the Department?  Despite several phone conversations with well-placed sources ensconced in 1PP earlier today, not one could provide a legitimate answer for that question: what the hell is an IG going to do?.  What each of them did express were opinions ranging from “Let’s wait and see” to “I’m putting my papers in tomorrow.  Fuck it.”  The last thing NYPD needs at this time is a “brain drain”, a mass exodus of Cops who worked their way up through the ranks, Cops who earned promotions and Gold Shields based on their dedication, sacrifice, service and valor not quotas or appeasement.

Last Friday New York City appointed its first-ever Inspector General for the NYPD — Philip Eure.  Eure, a lawyer by training is currently the Head of the District of Columbia Office of Police Complaints. He has held that post for many years and has functioned as more of a placater between the Washington, DC inner city community and the Washington DC Metro Police.  His position in DC appears to be just as nebulous as it has been eluded to be here.  In the weekly game of musical chairs that is the accountability session, IG Eure might be the one left standing when the music stops.  The NYPD already do and have answered to a Civilian Complaint Review Board (CCRB), has a more “proactive” Internal Affairs Division (IAD) and has as many lawyers on staff as does any entity with 35,000 plus employees.  Will Commissioner Bratton be held accountable to IG Eure or will he focus his attentions elsewhere?  These are the pressing questions that no one can answer with any specificity.

WHO IS THIS GUY?

Anyone old enough to recall the days of Dr. Downtown Lee Brown, an outsider that then Mayor David Dinkins installed as his second Police Commissioner, NYPD can be a very difficult organization to be accepted by.  Philip Eure is another “outsider” and has many “hearts and minds” to win over in the rank and file, the heads of the various unions, and the top brass Bratton has implanted on the floors below him at 1PP.

Mr. Eure did serve a stint as a Federal Prosecutor before drifting towards positions more closely affiliated with actual Law Enforcement.  Still, many Members of Service (MOS) of the NYPD have expressed grave doubts about his capabilities and his jurisdiction.  Speaking with an MOS earlier this evening working a foot post near the Russian Mission on 68t Street, who spoke only under an agreement of anonymity noted, “I don’t know what to make of it.  None of us do.  It seems that the Job is always trying to make the Job harder.  We’ve already got enough scumbag IAD guys, guys who were chosen right out of the Academy so they wouldn’t have any relationships with other Cops, wasting time and money on bogus “sting” operations on Cops?  It’s like every night you go to work and it’s like what the fuck”.

We will all have to wait and see.