ALL QUESTIONS, NO ANSWERS
WHAT GOOD IS A TRANSPONDER IF IT CAN BE
SHUT OFF? 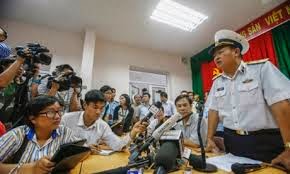 MILITARY OFFICIALS FROM MALAYSIA, VIETNAM, THAILAND,
AND CHINA ARE TAKING HEAT FROM THE PRESS AND ARE BEING
ASKED TO EXPLAIN HOW THEY “LOST” A 777 JETLINER

(Thursday, March 13, 2014 NYC)  The infamous “Black Boxes” that are actually orange in color are the Holy Grail in the aftermath of a plane crash.  These boxes contain in flight data and flight deck voice communications; two of the most important elements to recover after any type of aviation accident.  They are constructed to be virtually impervious to all the stresses and strains a failing plane may be subjected to as well as water and the ability to survive a fiery crash on land.

Much is being made of the fact that some involved in the search efforts have said that it appears that the plane’s transponder may have been “shut off”.  What good is a transponder if it can be “shut off”?  One would think that the transponder is as important as the black boxes that are constructed to such rigorous standards.  That the control switches for the transponder are on a panel on the flight deck accessible to anyone familiar with the instrumentation is very difficult to comprehend.  It seems to defeat the entire purpose of having such a device at all.  Transponder “pings” are continuously sent telemetry signals regarding altitude, direction, and airspeed.  On this particular aircraft even the massive Rolls Royce engines sent data about the engines function to their headquarters.

As the search for the missing Malaysia Air Flight MH370 continues with an increasing tone of recriminations between the Airlines and the hundreds of family members of those missing, civilian and military air traffic controllers, various governments from Thailand to China, and independent aviation experts, the recovery operations appear confused.  The scant evidence that is available including the last radar appearance of the flight and “pings” sent to satellites from various components of the sophisticated engines and avionics systems is emerging and actually generating more questions than answers.

There has been reporting in the last 24 hours claiming that the plane flew for an additional four hours after it was last detected.  This has raised a new theory that is as disturbing as proof of this being a terrorist strike.  Some are speculating that the plane might have been hijacked; hijacked in the older definition of the term.  If this is the case and the plane was hijacked and “taken to another place for another use in the future” that means that there are 236 people being held hostage somewhere. It would be a huge coup if a terrorist cell has managed to hijack the Boeing 777 and enormously embarrassing to the security services in Kuala Lumpur and other foreign airports. High ranking officials at the international law enforcement agency, Interpol, have already criticized failures in many airports around the world when it comes to the new security protocols and practices initiated in the wake of September 11, 2001.

There has been growing concern from security professionals in various federal agencies that many overseas airports have relaxed, a few basically ignoring, some of the boarding procedures and that they pose a lack of security ready to be exploited by terrorists.  Complacency is as great a force to be aware of as are the terrorists themselves. They have clearly demonstrated their ability to remain patient and focused; they simply do not count time as we in the West do.  As Steven Coll wrote in his book titled “1000 Years For Revenge” the ancient cultures that have produced many of the most virulent strains of terrorists, mujahedeen, and the practice of terrorism include Egypt, Iran, Syria, Yemen, and Afghanistan.  In ways both societally and economically many of the young educated men in these countries assign blame for the problems in their native land as the result of some form of American “Imperialism”  or “aggression” usually accusing America as simply trying to seize total control over their natural resources, namely oil. There, hostility is fed by radical clerics, while in important ways they seem torn and disconnected from the modern world yet many covet what the West has to offer. The 19 September 11, 2001 hijackers had no reluctance frequenting strip clubs and drinking alcohol yet they somehow managed to live among us with a burning hatred and evil resolve that they were actually able to carry out their suicide missions.

EVERYTHING OLD IS NEW AGAIN

One need to be of a certain age to recall the days when hijacking airplanes was in vogue with terrorist of every stripe.  They would commandeer a jet and make demands of final destination, the release of “political prisoners”, cash or asylum.  The 1970’s can be considered the “hay day” of air plane hijackings the overwhelming majority of which ended in a bloody mess for the hijackers.  They soon realized that no country will bargain with terrorists or make deals such as swapping hostages for prisoners.  (Although we now know that that is precisely what Ronald Reagan did in 1980)

Then they changed tactics. There were several incidents where terrorists planted explosives on planes and, in probably the worst of all such callous deeds was the bombing of Pan Am Flight 103 over the small Scottish village of Lockerbie on December 21, 1988 that took the lives of all on board – 243 passengers and 16 crew) as well as 11 people on the ground.  It took years for some reasonable amount of understanding all aspects of that case.  Terrorist agents working under the direction of the Libyan leader Colonel Muammar Gaddafi planted an explosive device in a piece of luggage that exploded over the sleeping Scottish town.

If, in fact it turns out that Flight MH370 has been hijacked in the conventional sense of the word, it could usher in a new generation of terrorists employing more sophisticated hijacking tactics including circumventing airport security, forging documents and well planned and financed support operations.  Hijacking planes with passengers becomes an international incident of epic proportions as Embassies and Consulates representing the interests of the hostages from their countries rapidly becomes a confusing snarl of protocol, diplomacy, and national interest for all involved.

One also needs to realize that if Flight MH370 was hijacked surely the hijackers were working in concert with others on the ground; one cannot simply just land a 777 anywhere.  It requires a long tarmac the kind only seen at civilian and military air ports.

Speaking with a high ranking analyst with broad experience in the Intelligence community earlier today, she commented on the fact that due to the many hot spots around the world, “It is not too far a stretch to consider that the missing Malaysian air plane was indeed hijacked.  And, we should not be too narrow minded and automatically suspect terrorists from the Arab or Muslim community.  Russia’s president has amassed a large number of troops, artillery and attack aircraft on the western border of Ukraine.  Crimea is becoming more destabilized every day with ethnic Russians ready to fight to regain the protection and, at least in their minds, privileges of once again being part of Russia.”

For the time being the mystery of this Flight and all aboard remains vexing.  All we can do for those passengers and crew is offer wishes and prayers and for all involved with the recovery send them prayers of resolve.  Theirs is a difficult task given the immense dimensions of the search area.  Until the wreckage of the plane is discovered or the details of a hijacking revealed we wait: just another reminder of the times in which we live.  Security and vigilance are what we have at our disposal daily and we are all this together.  Who knows when, where or how terrorists will strike us next.  As virtually every person working in the Intelligence field be they CIA, DOD, NSC or NYPD it is not a matter of “if” they will try to attack us again, it is only a matter of “when”.