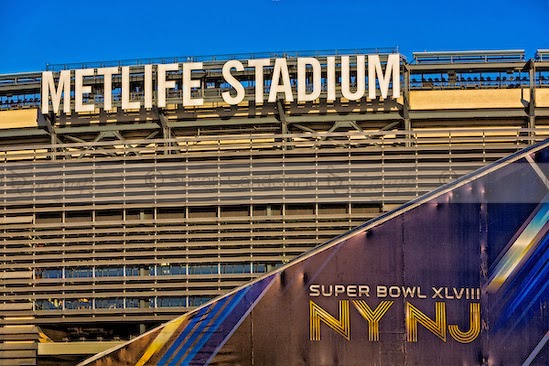 (Tuesday January 28, 2014 Herald Square, NYC)  Super Bowl XLVIII will be played Sunday at MetLife Stadium in East Rutherford just a few miles across the Hudson River from here but the game itself will be the grand finale of a week-long celebration of everything NFL.  Since this past Sunday a 13 block swathe of Midtown Manhattan from Herald Square to Times Square has been transformed in Football Boulevard; a temporary football oriented theme park that has already attracted thousands of visitors.  While bookies and odds makers are setting the betting lines, the NYPD is defining and manning the boundaries of Football Boulevard as well as providing an unprecedented level of security for this one of a kind event.

In this post 9 -11 - 2001 world any mass gathering, be it a professional football game or a shopping mall, have become increasingly attractive targets for terrorists to ply their trade. The most readily available and broadly effective tactical tool in the terrorist arsenal is simply inducing fear. By nature terrorists must utilize the tactics of asymmetrical warfare and one of their most effective methods is issuing threats.  They score a victory every time fear settles into a public’s consciousness and their threats of impending attack prompt a reaction including the alteration of the flow of events.  Yes, every terrorist threat, each byte of “chatter” the NSA catches in their broad nets must be taken seriously. That is a fundamental of security today.  Osama bin Laden declared war on America time and time again; in printed manifestos, in interviews with CNN and CBS and, sadly, no one in our sprawling federal and military intelligence apparatus took him seriously.

The threat of terrorism is now firmly implanted in our collective and institutional conscious.  As New Yorkers we constantly see billboards on the streets and in the subways encouraging us to “say something” if we “see something”.  The capabilities of the NYPD today are exponentially more focused on terrorism and on interdiction than ever before.  Hundreds of men and women in NYPD labor night and day in specialized Units that did not exist as they are now on September 11, 2001.  “Football Boulevard” will be blanketed with additional surveillance cameras, uniformed and plain cloths Officers as well as sophisticated devices that can identify even the smallest amounts of nuclear material.  Many of the measures being enacted remain classified but there can be no doubt how vigorous the NYPD will be in this neighborhood from now until the Super Bowl is over late Sunday night.

UP TO THE CHALLENGE

There is arguably no better prepared municipal Police Department than the NYPD.  The challenges this Super Bowl present are not unfamiliar to our City or our Police Department.  NYPD has decades of experience providing safety and security for events that take place on the world’s largest stage.  From regular Presidential visits, to the annual United Nations General Assembly and ever type of high visibility event, NYPD has developed and enacted a series of contingency plans that have been carefully crafted, rigorously tested and regularly practiced.

While throngs of visitors have already visited this oddball Midtown attraction with its 60 foot high toboggan ramp, NFL sponsored attractions and events; the attention on the actual site of the big game is also ramping up. Personnel from the local towns around MetLife Stadium to the New Jersey State Police, FBI, and Department of Homeland Security comprise just a few the elements that have been assembled from 35 different Law Enforcement Agencies.
But, according to former head of the New York Police Department’s Intelligence Unit, Ed Hartnett told NBC News this Super Bowl, “truly defines the word ‘challenge’ when it comes to security.”

In an interview with NBC News Lt. Col. Edward Cetnar of the New Jersey State Police commented, “Everything that we're doing has an air, land and sea concept,” given the unique geography surrounding the MetLife property.  The East Rutherford stadium property is accessible via a network of rivers, small waterways and marshlands, or, as Bruce Springsteen has sung, “…The swamps of Jersey”.  There has been a perimeter fence constructed enclosing a 2.5 mile radius setting the boundaries that will be patrolled by helicopters with sophisticated visual devices and small boats from Agencies as diverse as the NYPD Harbor Unit, The NJ State Police Maritime Division and the United States Coast Guard.

For those unfamiliar with the proximity of MetLife Stadium to Midtown Manhattan (which means anyone not from the NYC Metropolitan Area) New York City is inextricably physically linked to North Jersey.  There are three prominent crossings of the Hudson River, the waterway separating New York and New Jersey; The George Washington Bridge, and the Lincoln and Holland Tunnels.  There is a heavily used ferry network extending from Staten Island to Manhattan as well as those small ships that traverse the Hudson from New Jersey’s “Gold Coast” from Hudson County communities including West New York, Weehawken, Hoboken and Jersey City.

The NYC Metro Area boasts one of the country’s most efficient mass transit systems.  The components of this network seamlessly connect at various nexuses; NYC Subways are easily accessible to the Path System with subways to and from North Jersey as well as the New Jersey Transit system itself running trains from Penn Station in Midtown all the way out to suburban New Jersey.  In many ways the life blood of the Metro Area is the mass transit network.  For as densely populated as this small region is, without mass transportation options, the region would be prone to shut downs, gridlock, traffic jams of epic proportions and the local economy would suffer greatly.  Actually every institution from Wall Street to the major media outlets that call this region home would be susceptible to the logistical nightmares that the Metro region and its approximately 16 million people who live here.

The participants in the Super Bowl, the Denver Broncos and Seattle Seahawks have taken up residence this week in newly constructed swanky hotels in Jersey City.  The “Media Day” events yesterday took place at the Prudential Center in Newark a scant few miles from the game’s venue.

TAKE A LOOK AT A MAP 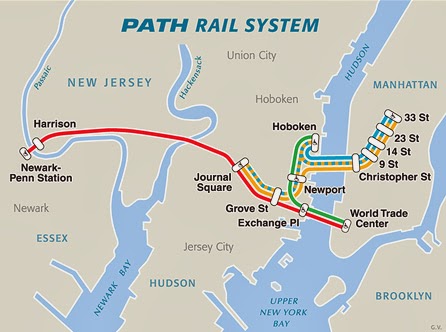 For some intents and purposes Hudson and Essex Counties in New Jersey are appendages of New York City.  If not for the Hudson River they would constitute a contiguous landmass home to the most densely packed population in the United States.   What people from other parts of America be they from the Deep South, Midwest or Southwest is that the states in the Northeast were parts of the original 13 Colonies; home to the first waves of ‘huddled masses yearning to be free’.  In colonial days the only mode of distance transportation was the horse and buggy. Our founding fathers exchanged communiques via lone carriers on horseback and, as a direct result of the limitations of those days, the Northeast states are small and clustered in a distinct corner of our country.  The population density of the Northeast Corridor is a direct result of our nation’s historical birth.

New York City sits in the center of this most densely populated region.  On any given day the tasks associated with keeping the peace, enforcing the law, insuring the safety and security of all who live here, work here, visit here and travel through here is a Herculean effort requiring coordinated operation between multiple Law Enforcement Agencies.  Add into the mix an event the scale and scope of the Super Bowl and its extravagant list of week-long attractions and activities based in a chunk of Midtown stretching from Times Square to Herald Square and the daily tasks become that much more demanding.

We have seen the faces of terror evolve and mutate since September 11, 2001.  Across the world in perpetually troubled “hot spots” to distant locales that attract American and European tourists’ terrorist have struck at what have previously been designated “soft targets”.  The security of virtually every United States Embassy where ever it may be is robust.  Our foreign embassies and Consulates today are more akin to fortified military bases than diplomatic outposts where business is conducted.

We have seen terrorist strikes soft targets from plush hotels in India and the Philippines, to night clubs in Beirut and Germany.  American Embassies in 1998 Kenya and Tanzania were hit by the forward guard of what ultimately became the most feared terrorist organization, Al Qaeda.  Since the death of Osama bin Laden Al Qaeda has become a decentralized collection of terrorist cells operating autonomously utilizing both well developed and carefully planned tactics to the simple but deadly use of suicide bombers hitting “targets of opportunity”.  The asymmetry of this equation gives a decidedly lopsided advantage to the terrorists.

The 2013 Boston Marathon bombing as cold and callous as it was deadly and terrifying illustrated the inherent asymmetry of the threats we face.  Two young men, for whatever reasons, assembled crude explosive devices similar to the IED’s (Improvised Explosive Devices) that were so brutally effective in Afghanistan and in particular Iraq where insurgents, ragtag militias and small terrorist cells did battle against the full might and strength of our Armed Forces with deadly efficacy.  The axiom that has come to define the field of battle, the line of scrimmage if you will,  as amorphous and free floating as it is says that the terrorist only have to be “right” once while we, the Counter-terrorism, Intelligence and Law Enforcement Community have to be right all the time. This challenge is a near impossibility.  It is for these reasons that as many variables as there are that can be controlled, in even a rudimentary manner, are.

Aside from erecting physical barriers, implementing strict organized crowd control tactics, deploying large numbers of uniformed and non-uniformed Officers and Agents, relying on blanket coverage of the various sites by surveillance and closed circuit monitoring, vigilance is the mantra of the NYPD and all the other Agencies tasked with securing the Super Bowl and all its far flung related events.

All involved in this enormous undertaking are hoping that contending with the possibility of blustery winter weather will be the only threat for the rest of this week and for game day.

Posted by Brooding Cynyc at 9:15 PM