THE BILL AND BILL SHOW 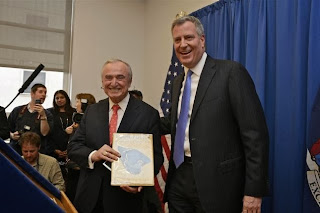 Bill and Bill: All smiles during their honeymoon.
How long will it last?

(Wednesday December 11, 2013, Carl Schurz Park, NYC)  From the promenade here that runs from East 84th Street up to E 90th Street one is afforded a great view of the East River, both Randall’s and Wards Island, and the Triborough Bridge.  Nestled within this park is the 18th century mansion that is the official residence of the Mayor of New York City, Gracie Mansion.  Not since Rudy Giuliani has this stately structure been occupied by a Mayor.  But that is about to change.  Earlier today Mayor-elect Bill De Blasio announced that he will be moving into the Mansion with his wife, son and daughter after his inauguration.  They will still retain their home in Park Slope Brooklyn but citing travel and security concerns the De Blasio’s have decided living in Gracie Mansion will be easier on all of them.  It may also prove to be a shrewd public relations coup having the biracial “First Family” of New York City seen hosting honored guests, family friends and giving tours to everyday New Yorker’s at The Mansion.

But Bill De Blasio was not the only notable Bill to make an announcement this week.  Bill Bratton, the NYPD Commissioner-in-waiting sent a department wide message yesterday to all members of the upper echelon of the NYPD requesting they each submit an up to date copy of their resume’.  Bratton wants all members from the rank of Inspector and above, including highly placed civilian employees of the NYPD to do what essentially amounts to reapply for the positions they currently hold.  While it is certainly the newly appointed Commissioner’s prerogative to make personnel changes as he deems fit, his memo has been seen as a harbinger by some long serving members of NYPD that widespread changes are in the offing.  Many of the men and women currently in the upper echelon have worked for Bratton previously when he was Commissioner from 1994 until 1996 when he and Rudy Giuliani had a very public falling out and divorce.  Actually for many members of the “Top Brass” their career trajectories began under the previous Bratton regime.  But there are others who have candidly expressed the concern that Bratton may be looking to “settle some old scores”, or, “fill some very important posts with his own friends” as one high ranking NYPD official who will be among those polishing up his resume’ stated not for attribution.

As reported in detail in today’s issue of The New York Daily News, “Bratton’s directive applies to those with the rank of inspector and above, including civilian deputy commissioners and directors, and climbs up to the highest echelons of the NYPD. Those include (Chief of Department Philip) Banks, Chief of Detectives Phil Pulaski, Chief of Internal Affairs Charles Campisi and First Deputy Commissioner Rafael Pineiro, who also interviewed for the top cop’s job.” (Link to full NYDN article below)

Lis Smith, spokeswomen for De Blasio noted that what Bratton is requesting now is simply his own standard operating procedure and a practice he has employed in virtually every other similar job he has held in the past.  Despite downplaying Bratton’s request as merely part of his management style, some who must submit their resumes’ perceive it in a more ominous manner.  Another highly placed NYPD Supervisor also speaking not for attribution said, “I can see where he’s (Bratton) coming from. I really do but, it is vital to the management and morale of the entire Department that he keeps a sense of continuity, that every Cop from top to bottom of this organization feels that things are not going to change drastically.  Bratton’s reputation precedes him and some of my colleagues are also concerned about maintaining stability among the ranks.  The last thing this Department needs is a big shake up.  If he is simply trying to get some people’s attention then I can tell you he has certainly succeeded”.

THE END OF THE HONEYMOON

Of more immediate concern to the hard working men and women of the NYPD is just when the honeymoon between Bill and Bill will come to an end and, make no mistake about it, their honeymoon will end.  Much of candidate De Blasio’s campaign rhetoric was extremely critical of the NYPD, Commissioner Ray Kelly and some of the practices and procedures of the Department most notably the “Stop, Question and Frisk” (SQF) policy.  Candidate De Blasio made the “dismantling” of SQF the centerpiece of his platform geared to “reforming” NYPD.  Bratton is a staunch believer in SQF,has implemented it aggressively while Chief of LAPD and has made no comments about “reforming” any of the existing policies, practices or procedures.  Candidate De Blasio was also a vocal proponent of increasing civilian review of the Department, an issue that every Member of Service (MOS) feels very strongly about because it directly impacts how they perform their job.  What may be missed in the months to come is the absence of a Mayor and a Police Commissioner who actually saw eye to eye on some of the most basic fundamental elements of policing our City.  Mayor Bloomberg, think what you will about him, was, at least, always publically behind Commissioner Kelly and the MOS knew that Kelly “had our backs”.  One cannot dismiss the significance of this as it applies to the men and women on patrol, conducting investigations, gathering intelligence and generally enforcing the law on our streets.

The harsh fact of the matter is that the men and women who police Our City often find themselves in critical scenarios where they must process a great deal of stimuli and information under extremely stressful circumstances and make decisions; decisions where life and death might hang in the balance.  If Officers are factoring in how a civilian review board will analyze their actions lethal and fatal mistakes will most certainly be made.  An Officer’s moment of hesitation or doubt may cost the life of a partner, another Officer or an innocent victim or bystander.   Candidate De Blasio’s blatant pandering to the segments of our population who feel most aggrieved and disenfranchised did nothing to promote the notion that relations between the residents of the neighborhoods we police and our Department could change for the better if honest and open exchanges were made. Now that candidate De Blasio is Mayor-elect he will soon be taken to task by those segments of our populace to whom he pledged allegiance and reform.  The new Mayor may find quickly that his campaign stump speeches do not comport with Bill Bratton’s policing philosophy.

As Bill Bratton sits in his transition phase office and reviews all the resumes’ he’s requested he will encounter resumes’ of others who were in contention or, at least, considered for the post he is about to assume.  On the other side of City Hall De Blasio’s team may wonder why Bratton was selected while there are so many well qualified NYPD veterans in good standing who could have effectively taken over the reins of NYPD. The short list of those who were or should have been considered is impressive. Chief of Department Philip Banks and First Deputy Commissioner Rafael Pineiro as well as Chief of Detectives Phil Pulaski are all as well qualified if not more so as longtime NYPD veterans who rose up through the ranks than Bratton.  For better or worse, NYPD is an organization that respects history, legacy and promotion from within.  Some may criticize the “culture” of the NYPD; it has served the Department well since the First NYPD Commissioner, Theodore Roosevelt, consolidated an un-unified collection of Police Departments from what are now known as “The Outer Boroughs” into one organization proudly designated as the NYPD.

THE LIGHTS ON BROADWAY

For now the newest show in our town world renowned for its spectacular shows is the Bill & Bill Show.  While it is still in its premier weeks, it will remain to be seen how the audience – the citizens of Our City – respond to the plot line, characters and production.  For the most part this is a two man show, a drama that can turn comedic or tragic in on night.  The curtain will no doubt fall on this show night after night and, hopefully, it will rise again the next night with cast and crew firmly in place and performing as expected.  But, this particular show has a certain tinge of mystery to it; how will bill and Bill play out in reality when the stakes are higher than mere ratings.

The citizens have spoken and delivered Bill De Blasio to Gracie Mansion and, in turn, De Blasio has recalled a star from the past to be his most visible cohort.  We, a discerning and picky audience will render opinions soon; very soon.  We will decide if Bill & Bill get a thumb up or thumb down.  We know a good show when we see it and we can easily recognize a cheap vaudevillian act from a standing ovation performance.  For the time being opening night is a few weeks away; the cast is in rehearsal.  But, once the New Year strikes and the curtain rises we will determine rapidly if the Bill & Bill Show is going to be a long running act or relegated to an off-Broadway death.

I'd be willing to bet that Bill and Bill go their separate ways within one year. It is sort of amazing that Bratton even took the job knowing what de Blasio has said in the past about NYPD. Maybe Bratton just sold out. We will find out.