ONCE THERE WERE GIANTS 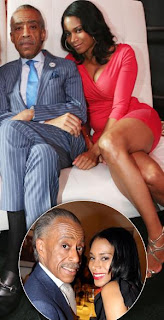 Al Sharpton and his girlfriend.
Is this really the face of African American “leadership”?

(Thursday July 18, 2013 NY, NY)  The long storied and often bloody civil rights movement in America is replete with men and women of uncommon strength, persistence and moral fortitude.  From the earliest of the abolitionists through the four centuries of slavery the struggle for equality can be traced through individual lives.  The collective experience of segregation, discrimination, Jim Crow laws, and blatant bigotry was born by all African Americans.  It took the actions of courageous men and women who were able to galvanize an entire people and bring a cohesive and united front to the movement.  It took the perseverance of the entire African American populace engaged in that struggle but it also required some to step forward and bring the cause out of the endemic prejudice of the Deep South into the national conscience.    The names of these individuals are forever etched in the history of our Country and they inhabit a special place in the story of “The Movement.”

Today the African American community has as its self-appointed “leaders” men devoid of any of the characteristics of those who truly were leaders for their people and cause.  Men of the ilk of Jesse Jackson and Al Sharpton are no more than self-serving hustlers who prey on the community they claim to serve and represent.  There are others such as Cornel West and Michael Eric Dyson who sanctimoniously preach from their lofty ivory towers in Ivy League academia.  These men are all far removed from the realities of life and have become wealthy by exploiting the African American community’s ills and societal maladies.  Men such as these seize any and every opportunity to aggrandize and insinuate themselves into every high profile controversy with even the faintest scent of racism.  The recently concluded trial of George Zimmerman is only the latest example.

THERE WERE GIANTS ONCE

Long before the landmark Supreme Court decisions of the 1950’s and 1960’s and the federal legislation that ensued to eradicate systemic segregation, widespread discrimination, and the resultant inequality they fostered,  there were brave activists like Harriet Tubman, Jane Pittman, W.E.B. Dubois, and many other lesser known people who literally put their lives on the line for what they believed.  It was only in post-World War II America, a global conflict in which tens of thousands of African American men served with valor that what came to be officially known as The Civil Rights Movement began.  In some of the earliest legal battles a young lawyer for the NAACP, Thurgood Marshall, won judicial victories but the real battles were in the cities and towns, rural and suburban areas, and on the streets of America from coast to coast.  Thurgood Marshall went on to become the first African American Supreme Court Justice and never ceased to champion “equality under the law” for all Americans regardless of race, color or creed.

The 1960’s would prove to be the turning point, at least legislatively, in The Movement.  As President Lyndon Johnson was signing laws such as the Voters Rights Act, The Fair Housing Act and other “affirmative action” measures, their emerged men able to galvanize the African American community in ways they’d never been represented or united before.  From a humble church in Alabama Reverend Martin Luther King, Jr. claimed his place in the Pantheon of civil rights leaders with his famous March on Washington in 1963.  He along  with Reverend Ralph Abernathy, Andrew Young, John Lewis, Julian Bond, Malcolm X, Rosa Parks, Medgar Evers,  James Shepherd,  and a cadre of committed activists adhering to the principal of “peaceful non-violent” demonstrations, marches, and sit-ins, forced their cause into the conscience of the entire nation.  This was no longer about what was happening on the hard sunbaked red clay of Georgia or in the humid Mississippi Delta, or any particular location in the Deep South.  No, this was a quest for equality and acceptance touching virtually every institution and community in America.  Some of these heroic figures paid with their lives while others suffered brutal beatings and unjust incarceration.  However, in the long run they were victorious in that they paved the initial inroads that would bring the African American population ever closer to equality.

THE FALLACY OF A “POST-RACIAL AMERICA”

In 2008 with a huge plurality of voters America elected our first African American President.  The freshman Senator from Illinois, Barack Obama, obtained his electoral victory by capturing the votes of people across all demographic blocs.  Some in the media cited his historic achievement as the beginning of a new age in our Country, an age where we were the “colorblind” society Martin Luther King dreamed of and spoke about so eloquently over 40 years before. Of course, given our nation’s history regarding race relations, this was a Pollyannaish pipe dream.  But, it was an impressive start to what is a new chapter in our history.  Those among us of a certain age, both Black and White never imagined we’d see an African American man and his family living in The White House.

Yes, we live in a Country with a twice elected African American President and that is a remarkable fact that will never be diminished.  Still, we live in a society with deeply ingrained prejudices and biases although the younger generations are coming of age in a vastly different America as far as race relations are concerned than did their parents and grandparents.  However, as the jury decision in the State of Florida v George Zimmerman case clearly illustrates, we are far from a colorblind society; if anything, we appear to be taking some backwards steps as a people.  Contrary to some of the ascertains from the cable infotainment chattering class, the Zimmerman verdict will not prompt a “national debate” about race.  When have we ever had a “national debate” about anything?  What passes for national debate are the conversations we have with our families, friends, neighbors and coworkers.  Since our elected representatives in Congress have no vested interest in responding to the desires of their constituencies no “public debate” is possible.

The notion that we are in a post-racial era in America has been fomented by very strange bedfellows.  The Republican Party claims that our society has evolved racially and that affirmative action initiatives are no longer needed.  Yes, it is true that affirmative action has leveled the playing field over the last 40 years for minorities including African Americans and yes, some of those programs have outlived their utility.  However, in the same breath the Republicans in Statehouses across the Country have done everything in their power to disenfranchise voters of Color.  Similar measures have been taken in Congress and it was just two weeks ago that the Supreme Court eviscerated the Voters Rights Act when they struck down Amendment 4 of that landmark Bill.  The so called “Tea Party” has taken up the cause to suppress the vote joining with their Republican colleagues by redrawing Congressional districts with convoluted gerrymandered maps.  These maneuvers are designed to assure that their “seats are safe” while simultaneously making it more difficult to have fair elections.  No, we are far from a post-racial America when efforts are on-going to this day to make it increasingly more difficult for people of color and poor urban voters in general to vote.

FROM GIANTS TO DWARFS

That we are in a new era in our history regarding race is undeniable.  The United States Census Bureau said earlier this year that America is no longer a “White” majority Country.  The demographic shifts are tectonic and will continue as we become “Browner” and the birth rate among “Caucasians” continues to decline.  This new era requires a different brand of leadership in the Black and Brown communities; leaders more adept at truly representing underrepresented segments of the electorate.  Sadly what passes for leadership today in the African American community are no more than cheap hucksters, charlatans, blowhards, and rabble rousers.  Gone are men like Martin Luther King and Thurgood Marshall.  In the void left by the true pillars of the civil rights movement are shallow, craven men like Jesse Jackson and Al Sharpton.  These two men are greedy opportunists never far away where ever a racially controversial issue hits the media.  They are shameless ambulance chasers out to enrich themselves under the guise of “spiritual advisors” and “activists”.

Just as crass and craven are the members of the “professional Black class” like West and Dyson.  They write books and collect huge speaking fees for exploiting the conditions their “people” live in.  They do not offer scholarly work that provides practical remedies.  Not at all.  They write books titled to get them maximum exposure while breathing the rarified air only available to those who have risen in intellectual academic circles.  They may be more damaging to the African America cause than Jackson or Sharpton because their “influence” is more insidious.  Their education and the perches from which they pontificate lend them a measure of respectability that the like of Jackson and Sharpton can only dream of.

What is needed is for some of the highly successful African Americans we have become familiar with over the last decade or so to step up and contribute to their community.  There is certainly no lack of prominent African Americans to become engaged in a serious manner addressing some of the seemingly intractable issues that plague pockets of Black America.  Condoleezza Rice, Colin Powell, J.C. Watts, Dr. Ben Carson, and so many more brilliant accomplished African Americans should be involved in a broad sense.  They serve as powerful examples and are great role models. They should be at least as well known as the hottest rapper or athlete of the day.

If there is one major lesson that was taught by MLK and his peers is that unity is the key to progress.  When a group of disparate people with diverse circumstance are able to come together as a united bloc, they can affect more change than any number of “activists” working in their own self-interest ever can or will.

President Obama was twice elected to his Office by the votes of a vast coalition who came together and made history.  There is still much more history yet to be made.

Posted by Brooding Cynyc at 1:19 PM