A VERDICT BUT NOT THE END 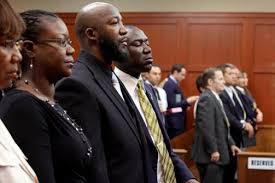 (Sunday July 14, 2013 Sanford, FLA)  Whether one agrees or disagrees with the jury verdict in the State of Florida versus George Zimmerman criminal trial, there is one fact that everyone can agree; the Prosecution failed in this case.  The team of Assistant State Attorney Bernie de la Rionda and Assistant District Attorney John Guy never presented the jury a cogent, concise, consistent factual portrayal of the events of the night of February 26, 2012.   While the intense media coverage of this case from the delayed indictment until the verdict last night provided the public with all the relevant facts of the night and events in question, the Prosecutors seemed unable to do so for the six woman jury.

Ever since this case made headlines far beyond this central Florida community of just over 53,000 residents, it has prompted discussions about race and guns, crime and security as well as brought the often controversial Florida “Stand Your Ground” Law to the fore.  As only cases like this can do, the facts, as they were known, spoke to the worst of African Americans fears while simultaneously exposing some of the long standing beliefs of White Americans regarding those very same issues. What actually transpired on that rainy Sunday night in the middle class gated community here between George Zimmerman, a neighborhood watch participant, and the 16 year old unarmed hoodie clad teen, Trayvon Martin, is now known only to Mr. Zimmerman.  That Mr. Zimmerman followed Mr. Martin and ultimately engaged him in a confrontation that resulted in the shooting death of young Trayvon Martin are the broad strokes of an event that has been racially laden from the start and is most likely far from being over.  The criminal acquittal of Mr. Zimmerman of the charges of Second Degree Homicide and/or Manslaughter marks the end of the first chapter of what will undoubtedly be a much longer legal ordeal.

Though it hasn’t even been 24 hours since the verdict was rendered here last night, the incessant chatter of the punditry, commentators, talking heads, and the legion of cable infotainment attorneys all “former” this or that, assure that this case will not drift out of the public‘s sight.  Already there is speculation about when Trayvon’s parents will file a civil suit in Federal Court and instigate additional legal action in filing torts from “wrongful death charges” to “personal injury”.  That they will is not in question.  No doubt they will be aided by organizations such as the NAACP and ACLU and individuals from Jesse Jackson to Al Sharpton.  That is their right and prerogative.  There are other legal venues they can seek “justice” in now that Zimmerman has been exonerated in Criminal Court.

To even the most casual observer, this trial, from the start, appeared to be a relatively straightforward matter.  An unarmed African American teen was shot dead by an armed man who was heard on tape to make derogatory remarks about Trayvon Martin as he followed him through the neighborhood.  The circumstances seemed to imply that Zimmerman was motivated by racial stereotyping and “criminal profiling” rather than objective suspicion.  That Zimmerman was armed and claimed afterwards to be acting in “self-defense” sounded more than a little preposterous.  Despite these facts Zimmerman was not initially charged; only after an outcry and protests did the State of Florida conduct an investigation and indict Zimmerman 44 days after the event.  By the time the trial began almost five weeks ago most were convinced Zimmerman would be found guilty especially after Judge Nelson instructed the jury they could consider the lesser charge of Manslaughter if they found the original charge of Second Degree Homicide disproportionate to Zimmerman’s actions.  Judge Nelson had also made some decisions during the trial regarding admissibility of evidence and other technical issues that favored the Prosecution and made the Defense’s case more of a challenge.  Yet, 16 hours alone in the Jury Room they presented their verdict of Not Guilty on all charges.  Mr. Zimmerman is now a free man.

Now the debate begins anew.  Naturally there are many in the African American community who see this verdict as the latest blatant example of institutional discrimination and feel that the criminal justice system has once again “failed” them.  Certainly anyone can sympathize with the Martin Family who lost a child to a violent death.  However it is difficult to agree that the trial was not conducted fairly; if anything, as mentioned earlier, the Court seemed to favor the Prosecutors.  The only component of “the system” that may have failed anyone is the Prosecution.  Rather than make the case to the Jury they presented a seemingly endless array of possibilities often presenting rhetorical questions and multiple alternatives to the very same questions they themselves had stated.  They appeared to be giving the Jurors a veritable menu of options any one of which they could believe and then find the defendant guilty.  Attorneys de la Rionda and Guy were unable to make their case; it’s as simple as that.

Now with the threat of protests and marches, demonstrations and recriminations a strong probability, we are left with no real winners in this case.  Sure, George Zimmerman is free and will have his firearm returned to him while the Martin Family grieves publically and privately as they consider their next step.  Since the night Trayvon Martin was killed almost 12,000 other young African Americans have been murdered in “Black on Black” crime across the Country.  Where is the outrage about this disturbing fact of American society today?

We are supposed to be living in a “Post Racial America” with the political ascendancy of an African American man to the Presidency 150 years after the end of “The War Between the States” better known as The Civil War. But we would all be naïve’ to believe we live in the kind of “colorblind” society that Martin Luther King dreamt of.  We do not.  Yes, we have made great strides to closing the divide between the races and the many and varied ethnicities that comprise America today.  But we have much farther to go towards true acceptance of and equality for all who inhabit our Country.

We also have to admit that ours is a violent society and what passes for much of our “culture” today is violent.  As our elected politicians remain frozen in inactivity regarding immigration policy and “gun control” we go about our lives as unengaged from such matters as possible.  And that is how it should be, right?  We work and provide for our families, have high hopes for our children and restrict our emotional investments to the smallest circle of family and friends possible.  This is also how it should be, right?  Yes, there is only so much we can do, so much we can care and worry about at any given time.

If nothing else the case of Trayvon Martin and George Zimmerman is a cautionary tale for our day.  That this one murder became elevated to a “national dialogue” and rose to prominence among the 20,000 murders since February 26, 2012 illustrates what animates us collectively.  There were two sides to this story and either you thought Zimmerman guilty as charged or you did not.  There was no middle ground, no room for the nuances of human nature and the odd happenstance that often crafts unforeseen circumstances.  Our lives are not defined by pure black and white choices.  We operate in the large hues and shades of gray amid those two poles.  Our society is not simply a matter of Black and White either.  There are shades of Brown populating the broad plains between those two poles as well.  Both Martin and Zimmerman brought their own thoughts and fears, prejudices and biases to that fateful altercation that night last year just as we all bring our own such collection of variables out into the world every day.  Our society is only as colorblind as we make it.

You ask why there is no outrage over "black on black" crime? Perhaps for the same reason George Zimmerman walked free- because in this country Blacks are perceived as "lesser". I've heard a lot of people say they simply don't care because -as someone put it- "the Blacks are killing each other off." It's a function of innate racism. Why did Martin's death get so much outrage then? Because it exposed that innate racism. They let Zimmerman go that night without any charges whatsoever- for shooting an unarmed Black kid who was simply walking home. The first terrifying aspect of this case is the whole vigilante aspect. Vigilantes are not police- they are predators. secondly- the idea that Stand Your Ground basically allowed Zimmerman to kill someone with virtual impunity, and the powers that be let him walk away. As if the killing of an unarmed teenager was just no big deal. Even beyond the racial aspects of the case, those two things- vigilantism and the abuse of Stand Your Ground- are terrifying. and third- for those of us appalled by the verdict, there is this- the idea that the police at first saw no reason to investigate further. - DJ

Largely, I agree with your position. As you may or may not know, I often present a " Devil's Advocate" position if for no other reason than to foster debate. We all end to think beyond the facts of this particular incident to the wider picture of who we, as a Nation, as a Society and a Culture we are...