THE LAST OF A BREED. GODSPEED. 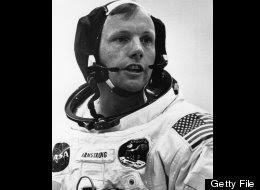 (Cincinnati, OH – Aug. 25, 2012)  It is safe to say that there will never be another American man like Neil Armstrong.  Never again will we witness a man so dramatically step into the history books and then step so modestly, humbly, and gracefully back into his private life.  Mr. Armstrong shunned media attention, accolades, and notoriety with the same rigor he exhibited during his years as a decorated Navy fighter pilot and a poised, determined, incredibly brave and daring test pilot in the days before NASA.  In today’s self-promoting, in your face, media driven cult of celebrity, a man of such renown who chose not to capitalize on such a grand achievement would be an enigma; probably criticized and  hounded by the media.  Neil Armstrong lived with a quiet dignity that may seem alien to many today.

NASA officials saw the character and integrity of Mr. Armstrong. Breaking with established in-flight procedure that dictated the Commander of the Lunar Module, Buzz Aldrin, be the first to step foot on the moon, they determined that Armstrong was better suited for the enormity of the achievement if the mission was successful.  And was it ever.

In his role as Pilot of the Lunar Module (LEM) Mr. Armstrong guided the odd looking, flimsy craft through a never before explored environment, remained calm and focused as he scanned the Lunar horizon looking for a flat spot to set down as his fuel supply was within seconds of being exhausted.  His self-possession, confidence, courage and determination allowed him to complete a feat of aeronautic finesse that left the entire NASA organization and the millions viewing the global broadcast on Earth in awe.

As the descent began, Armstrong and Aldrin found that they were passing landmarks on the surface 4 seconds early and reported that they were "long": they would land miles west of their target point.

Five minutes into the descent burn, and 6,000 feet (1,800 m) above the surface of the Moon, the LM navigation and guidance computer distracted the crew with the first of several unexpected "1202" and "1201" program alarms. Inside Mission Control Center in Houston, Texas, computer engineer Jack Garman told guidance officer Steve Bales it was safe to continue the descent and this was relayed to the crew. The program alarms indicated "executive overflows", meaning the guidance computer could not complete all of its tasks in real time and had to postpone some of them.*

Perhaps those harrowing moments define Neil Armstrong better than his first steps on the Moon.  Clearly without his piloting abilities there would have been no “first steps” that day and possible not for years to come, if ever.

No one at NASA knew what Mr. Armstrong would say as he became the first human being to set foot on another celestial body in our solar system.  Many wondered what could possibly capture a moment of such enormity, of such profound human significance.  As he slowly made his way down the LEM ladder relating, step by step a description of what the almost zero gravity atmosphere felt like as well as his perceptions surveying the lunar landscape around him, he momentarily stopped to calmly inform Mission Control in Houston that, “I’m about to step off the LEM”.  And before the eyes of the world transfixed as this moment was broadcast live from another world, this humble man took a short hop and came to rest on the “very fined grained” surface, “almost like a powder” and through the crackling static that carried his voice through the void of space over 238,000 miles back to Earth, he uttered his famous line, “That’s one small step for [a] man, one giant leap for mankind".  His simple words will forever live as one of the most powerful and inspired quotes in history.  Only a man possessed of unique traits could have crafted such a poignant, elegant sentence to mark one of the greatest milestones not only for NASA, American ingenuity, engineering and scientific supremacy, sheer determination, resolve and spirit, but for the entire human race.

Mr. Armstrong and his fellow travelers, Command Module Pilot, Michael Armstrong and Aldrin, the second man to tread on the Moon, returned to Earth as conquering heroes and received every accolade and decoration the United States government and military had to offer.  They then went on a whirlwind world tour meeting heads of State from dozens of countries and accepting awards from each celebrating their remarkable journey.  Soon thereafter Mr. Armstrong quietly retired from NASA and took a teaching job at his alma mater, Purdue University.  Despite the avalanche of offers of all kinds that drowned him, he declined them all to resume his intensely private life and to live in virtual obscurity.  He did serve on the Board of Directors for several corporations most of which were in the aerospace industry but certainly never cashed in on his unique position.  Eventually he relocated to southern Ohio and taught in a small college outside Cincinnati.  It wasn’t until 2003 that he finally consented and allowed a book, the “authorized biography” to be written about him.  He cooperated in that project with author James R. Hansen and the book “First Man” was released in 2005.  It will forever be the definitive account of Neil Armstrong’s life.

For those of the Space Shuttle generation it may be difficult to fully appreciate the years of efforts across a broad range of scientific, engineering and military disciplines that culminated when the spindly-legged LEM touched down at the Sea of Tranquility.  They may not realize that there was a group of pioneers beginning with the famous “Mercury 7” some of whom were blasted into space atop unreliable military missiles, in small space “capsules” no larger than the interior of a VW Beetle.  Each launch was a first.  Each component of each system used in the program was novel. This was all done before the advent of the "computer age” by engineers armed only with slide rulers, brains and a broad vision of what could be.  Inspired by the young President John F. Kennedy who, addressed Congress in 1961 and stated the audacious challenge and goal to,  "Before this decade is out, of landing a man on the Moon and returning him safely to the Earth."

And that we did.  On a rainy day in New York City during the long hot Summer of discontent that saw American society being torn asunder by the strains of the Viet Nam war, an unpopular draft, the battle to end segregation and for racial equality,  the upheavals of the women’s rights movement, the sexual revolution and a decreasing lack of trust in our government, Neil Armstrong embodied all that was good and able in our troubled Nation and made Americans of every race and creed proud to be Americans if only for that one brief shining moment when a young man from rural Ohio spoke to the entire world from our nearest astral neighbor, the Moon.

*Italicized except taken from Wikipedia: http://en.wikipedia.org/wiki/Apollo_11

Posted by Brooding Cynyc at 4:39 PM