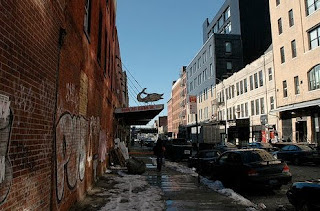 an elite team functions as NYC’s own CIA


(Thursday, May 5, 2011. Westside, Lower Manhattan, NYC) Just a short walk from what has been referred to as “Ground Zero” after the al-Qeada attacks on America at the World Trade Center in September 2001, is another “Ground Zero” that is the polar opposite of the Site just a few blocks away.
In the most nondescript of buildings in a neighborhood of remarkably nondescript structures, an elite force of under 50 NYPD Officers work in a hi-tech, dimly lit space tracking via high tech wizardry and high level intellect, potential threats to this City. The NYPD Intelligence Unit is among the most closely guarded, uniquely tasked and analytically capable of any Intelligence Unit on the planet. The men and women who staff this ultra-secret Unit are not assigned here by accident. They have all been “hand-picked” by the Deputy Police Commissioner for Intelligence and Counter-terrorism, David Cohen. And make no mistake about it, Mr. Cohen knows, intimately, the machinations and labyrinthine underworld of terrorism and intelligence gathering, analyzing and dissemination.
David Cohen was a CIA Officer for over thirty years. His career spanned some of the most tumultuous times and global events of the latter decades of the last century. He was an analyst who always seemed to “fall upwards” in his career, rising to a top level position in the Directorate of Operations at a relatively young age.

After the abysmal failures of the entire federal and military intelligence apparatus that came to light in the aftermath of September 11, 2001, Cohen came to New York City and offered his services. He would go on to create one of the mot sophisticated, effective, efficient and capable “intelligence units” in the world. No other City on the planet can boast of a comparable entity. Cohen realized all too well that New York City would remain the primary “target rich environment” that would attract terrorists of every stripe and inclination.