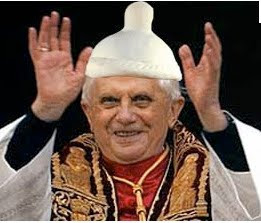 Pope Benedict XVI: more progressive than anyone would have imagined.


(Nov. 23, 2010 – Vatican City, Rome, Italy) What the hell is going on here? Has the Pope suddenly realized some of the harsher realities of life in the 21st century? Does the 82 year old Pontiff want some modernization of the Roman Catholic Church to be part of his legacy? Or did he simply misspeak during an interview with a German journalist?

Whatever the answers to these questions might or might not be, there can be no denying the scale and scope of the fallout from some comments the Pope made during a series of interviews which are being published as a book. Early leaked excerpts from that book included a statement accredited to the Pope where he said that condom use for male prostitutes comports with Catholic doctrine provided the condoms are worn to prevent the spread of AIDS. Holy Moses! The Pope, male prostitution, and condoms all in the same sentence? That is impressive. What's more impressive are the implications of Pope Benedict's words.

The Roman Catholic Church has been, arguably, the least receptive to a changing world when compared to other major organized religions around the globe. Her (The “Church”, for Catholics, is typically referred to in the feminine sense,i.e.: She, Her) intransigence if not flat out hostility to many of the issues facing Her followers, the world and the Church in general has resulted in dwindling flocks in America and other western countries. The Catholic Church has seen Her greatest expansion in some of the poorest places on the planet; many of the developing countries in Central and South America as well as throughout the African continent. This has presented unique challenges to the Vatican but, more about that lsome other time.

Back to the Pope and condoms.

Birth control has long been one of the most strict doctrines of the Catholic Church and among the most divisive and contentious for American Catholics. The fight began when the first birth control pill, known as “THE PILL” hit the market in the late 1960's. Suddenly men and women could copulate freely, recreationally, without the fear of an unwanted pregnancy. Men no longer had to carry “rubbers” in their wallets or steal them from their Dad's sock drawer. The Sexual Revolution had been declared a victory but the powers that be in the Vatican responded like stranded Japanese soldiers still fighting World War II alone on some anonymous atoll in the South Pacific long after VJ Day.

When the Supreme Court decided the landmark case known as Roe v. Wade in 1973 essentially legalizing abortions in the United States, the Catholic Church held firm in their unshakable opposition and adhered to the belief that abortion is “murder”. That is some heavy duty stuff.

For centuries the Vatican's word on issues related to sexual behavior was so ingrained in predominately Catholic nations that the demographics of those nations were profoundly affected. Among specific staunchly Catholic nationalities, the birthrate remained staggeringly high even as people struggled with high infant mortality rates and poverty. On the other side of the coin until very recently in history a marriage that ended in divorce was sufficient for excommunication from the Catholic Church. Many Catholics were driven from the Church believing that extramarital sex, the use of birth control, or having a divorce automatically meant they could no longer be “practicing” Catholics. It became a common notion among people, Catholics and non-Catholics, that the Church of Rome, The Vatican, The Holy See, and its Pope, the titular head of the Roman Catholic Church on earth, were backwards at best, behind the times, stuck in the Dark Ages, oppressive, unyielding, and basically, not very Christian in the broadest sense of the term.

They were all correct.

To truly be a practicing Catholic from the mid 1960's on (after the Vatican II Conference, when The Church sought to “modernize” the liturgy and some of Her teachings, proclamations, and social positions) was not an easy way of life. People coming of age during those years of true social upheaval of every kind in American society found themselves at odds with their parents and Church over issues that had increasingly become more publicly debated and more valued as “personal freedoms”. In virtually all the major issues of the day, The Church obstinately held on to Her dogma, doctrine and traditions even as self identified Catholics in America deserted The Church in droves. So many left embittered, humiliated, and angry that many of them have felt ostracized on some level to this day.

As the world turned and life went on, as the sixties gave way to the seventies and beyond, The Church never varied. So stubborn was Her position that The Vatican would always oppose any United Nations initiative that included introducing birth control into the largest emerging Catholic populations in the worlds who just happened to live in the poorest parts of the planet.

Now after two disastrous decades of being battered by sexual abuse scandals committed by Priests and covered up by the Church hierarchy at every level, this gaffe prone Pope drops a bomb on the core of Roman Catholicism. Intentional or not, in one fell swoop, one run-on sentence, one statement perhaps mangled in translation, may have unwittingly brought Catholics into the present day. No Catholic of a certain age could read the Pope’s statements without feeling that finally, after all these years, the Catholic Church recognizes the realities of the world and that many who have stumbled and strayed from Her teachings may suddenly find a renewal of Faith in the Church of their youth.

People have sex, people use birth control, abortions are performed legally for a variety of reasons both medical and personal and it is no Church’s or governments business. There are deadly sexually transmitted diseases, Catholics in the poorest countries should be able to practice birth control without the burden of feeling as though they have “sinned”. Priests have been predators, some predators pedophiles and the Church in all Her majestic splendor and glory has been fallible, yes indeed, horribly, oh so humanly fallible.