THE INCONVENIENCE OF PRIORITIES 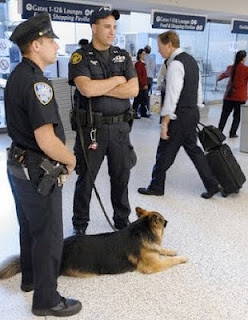 
(Nov. 19, 2010 – Queens, NY) While stories of passengers discontent with the recently implemented screening techniques at our nation's airports have dominated press and Internet coverage, there is a more important story playing out beneath the inane headlines and viral videos on YouTube. Security experts throughout the government intelligence apparatus and the private sector have concluded that terrorist cells have been conducting “tests” by sending packages, some capable of exploding, via air freight since late October. Thus far authorities believe they have “intercepted” all the suspicious parcels but there is some doubt as to whether or not some “dummy packages” have made it through multiple security checks at different airports and, ultimately, to terrorists operatives here in the United States. Most of these packages have originated in Yemen or Sudan; both North African countries have become favored havens for al-Qaeda and other like-minded groups.

Just as during the months prior to the terrorist attacks of September 11, 2001, the intelligence community has been reporting a significant increase in “chatter” among known terrorist groups from the towering mountains of the Afghanistan – Pakistan border all the way across Central Asia and into North Africa. The notoriously tight lipped National Security Agency (NSA) as well as the Central Intelligence Agency (CIA), the Defense Intelligence Agency (DCI) and the Federal Bureau of Investigation (FBI) have each made off the record statement confirming their shared belief that the “terrorists are probing, planning, and plotting. We have not seen this level of chatter since August 2001 and we all know what happened after that”, said one DIA analyst speaking not for attribution. She continued, “We now know that Mohammed Atta and his crews took many cross country flights to observe the in-flight security procedures on the types of planes they were planning to hijack. They meticulously collected their own intelligence and, as a result of their preparations, were able to pull off the fatal hijackings of that God awful day. We had all better take notice of this chatter now and begin to act accordingly.”

The “enhanced” screening procedures causing so much outcry from travelers, some pilots and civil libertarians have been implemented to interdict nonmetallic objects, including plastic explosives, that could be used in-flight to cause damage to an aircraft or actually “blast it out of the sky.” Some major airports are now equipped with full body scanners, an imaging technique that travelers can refuse for health or personal reasons. The frisk method or “pat down” as it has been called in the media, is similar to the techniques law enforcement officers have employed on the streets of America for decades. Some of the loudest opponents to the pat downs claim that TSA officers are not as well trained as most police officers and that some of the pat downs have turned into “humiliating public gropings.” Administrators at both the TSA and the Department of Homeland Security (DHS) claim the new techniques have been developed with privacy, decorum, and professionalism in mind. One senior manager at TSA speaking anonymously commented, “Sure, some folks are upset, some see it as a waste of time and a hassle. Obviously these folks have lost sight of the real threats we confront and have short memories. 9 – 11 was not even ten years ago and already the national mood seems to have turned against security measures in all aspects of our lives. The fact of the matter is that it is just a matter of time until some terrorist group or splinter cell manages to launch a successful attack against some vulnerable aspect in our infrastructure or transportation systems. After that, people will be complaining that we (TSA & DHS) did not do enough. You can't win in this climate of impatience.”

Airports and air passenger carriers around the world have been on a higher alert level since the initial parcel bombs were discovered on planes in Germany and Britain on October 29th, just 3 weeks ago. A timely “tip” from the Saudi Intelligence service and fast action on the ground resulted in the bombs being rendered harmless and thus subject to detailed analysis and testing by intelligence agencies from Scotland yard, to our CIA and FBI. Two of the original bombs were addressed to synagogues in Chicago and, after extensive testing that took several days, the British Intelligence Ministry revealed that those two bombs were “sophisticated” and ‘intended to blow up in the skies over Chicago.” the bombs were far more powerful than first indicated but also bore some of the hallmarks of other recent al-Qaeda manufactured explosive devices. “The use of cell phones as trigger or detonation mechanisms pointed to al-Qaeda on the Arabia Peninsula (AQAP), a terrorist group based in Yemen with related suspected sects or cells in Sudan, Kenya and possibly Libya.

Under orders from President Barak Obama the United States military has increased the number of un-manned flying vehicles (known as drones) patroling the skies above remote sectors of the Yemeni desert. These drones are capable of firing guided missles and are often armed with other classified ordnance. The government in Yemen, although weak, has pledged to assist in counter-terrorism efforts and step up their own persuit of al-Qaeda members known to be at large in their country.
Late today the Pilot’s Union was able to secure a deal with the TSA that would exempt their members from the enhanced screening procedures that have been the source of thousands of complaints. The American Civil Liberties Union (ACLU) is also looking into taking some legal action against the TSA and some of their personnel at specific airports where the highest number of complaints have been logged.

The Port Authority of New York and New Jersey, the owner and operator of the 3 major metroploitan New York City airports who also have their own police force said the complaints in their 3 airports have not been overwhelming. Captain Terrance Flynn who commands the counter terrorism unit at JFK here in Queens said, “At first we had a lot of angry travelers. there was a good deal of anger and simple bitching. But, when people realized that everything is done with their safety in mind, most travelers just accept it. We could be saving lives, but, hopefully, we will never know. I pray every night that we do not get hit again.”