HACKERS BASED IN NORTH KOREA 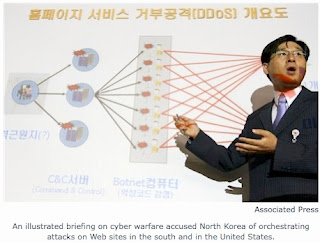 A CLEAR AND PRESENT DANGER


(July 8, Washington, DC) Since the terrorist attack on American soil in September 2001, the issue of “Homeland Security” has allegedly been on the top of the agenda for our vast “Intelligence Community.” It appears that despite the reports of “across the board” improvements and the untold billions upon billions of dollars that have been dumped into the coffers of every alphabet agency related to national security, Internet based attacks traced back to entities in, or possibly even the government of, North Korea have been escalating since July 4th. Many government Ministries in South Korea have been victims of this “aggressive” wave of cyber warfare as have many of our own Federal agencies, some actually charged with cyber security. What the hell is going on?

These cyber attacks, some in the form of “denial of service” bugs, come in the wake of North Korea’s belligerent launching of mid to long range missiles despite stern warnings from the United Nations and President Obama against such military activities. Presently, the United States Navy is involved in an embargo of sorts, as they “shadow” North Korean flagged ships hoping to interdict that country’s ability to export arms or weapons of any kind. Tensions are always high on the Korean Peninsula and the erratic, vocally hostile behavior of North Korea’s demented “Dear Leader”, Kim Jong Il, have recently been escalating. North Korea has openly, defiantly announced their intention to continue their nuclear weapons programs and have already demonstrated some relatively primitive nuclear capability. “Primitive is perhaps an understatement regarding North Korea’s ability to weaponize nuclear materials”, said Cleavon F. Lortch, Director of the Council of Asian Nations For Nuclear Peace. Lortch is an expert of nuclear arms and has long followed North Korea’s efforts.

What is highly disconcerting about these attacks which are on-going, is the virtually non-existent response of our government. More than Kim Jong Il lobbing missiles out into the Pacific, these cyber attacks are proof that who ever is responsible has a level of technological sophistication in hardware, software and manpower, that presents a clear and present danger to the United States.

“I am stunned that this is not headline news. No matter if these are just denial of service raids, the mere fact that external, hostile players have infiltrated some of our government websites, is, in my mind, very close to an act of war”, commented Dr. William Donovan of the Cyber Security Unit at BronxWest Consulting. Dr. Donovan continued, “Our Homeland Security apparatus should get their heads out of their asses, the President should tell North Korea in no uncertain terms that we will hold that government responsible for any cyber warfare activity originating within their borders. This is damned serious and could get worse very quickly.”