DON’T CRY FOR HIM ARGENTINA 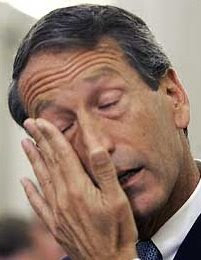 
ANOTHER SUCKER PUNCH FOR THE GOP

(June 24, Columbia, SC) Unless the Appalachian Trail extends deep into South America, the half-assed cover story offered as late as yesterday by Governor Sanford’s staff was not simply a lie, it was proof of just how far off the reservation this darling of the Right has wandered.

Regardless of what his staff did or did not know, the excuses, as lame as any ever proffered by a politician’s aides, the facts, as they were related earlier by the Governor himself, most likely spell the end of his political career beyond South Carolina. Sanford is the latest of the alleged “New Faces of the GOP” who have been exposed as adulterous dirt bags in the last two weeks. Sanford’s admissions and tearful, sometimes incoherent statements to the press, come within a matter of days of Republican Senator, John Ensign of Nevada revealing he, too, had been engaged in an extramarital affair. Ensign’s scenario is also clouded by accusations of extortion and bribery. Both Sanford and Ensign had been mentioned as potential national candidates in 2012. Oops.

Had the Republican Party not spent the better half of the decade of the 1990’s attempting to bring down and impeach then president Bill Clinton for allegations surrounding his affair with an intern, most observers would probably not be so unforgiving in cases like Ensign and Sanford. The fact that both men have been hard-core conservatives, champions of family values and popular with activists on the “Religious Right” and “Christian Conservatives” give these dalliances an air of hypocrisy and self righteousness that does give some pleasure. “To watch Governor Sanford finally realize that he doesn’t live in a house without glass, that he talks one hell of a talk while walking a distinctly different walk somehow just seems like cosmic justice”, commented long time Clinton friend, apologist, and flakey, Lannie Davis.

Governor Sanford admittedly began to have a ‘relationship’ with a woman in Argentina “about eight years ago.” he said that “It became much, much over the last year” and that he confessed the affair to his wife about “five months ago.”

Sanford resigned his position as Chairman of the Republican Governors Association but refused to comment on his status in his current term in the SC State house. The entire mess became public slowly over the last five days when it was reported that the Governor had taken off on his own and that his staff “did not know” his exact where abouts. The SC Lieutenant Governor, Andre Bauer, had expressed dismay and confusion about who was legally “in charge” of the State while the flighty Governor was MIA.

The fact that Sanford seemed to disappear over Father’s day weekend while he has four sons, raised more and more questions as well as concerns. His wife, Jenny, gave a terse statement to the local media on father’s day saying that she was “being a mom” and taking care of her family despite her husband’s bizarre vanishing act. As it was revealed today the couple is now in a “trial separation”.

Both Democrats and Republicans in South Carolina and beyond have expressed a wide range of reactions to the entire saga and about Mark Sanford himself. One top SC State Senate leader speaking not for attribution noted, “Mark has always been his own man. He is strange, sometimes aloof and snobby. I think he has meant well at times in his political career it’s just that he’s, ah...ah, weird. He couldn’t have found himself a girlfriend right here in the US of A? My goodness, what an odd duck he is.”

Most political observers agree that, while sanford’s romantic adventure may be nothing more than a “matter of the heart”, there remain many questions to ask. Who financed his trip to Buenos Aires? Who , if anyone, knew the truth about Sanford’s location during his absence?

Clearly the Governor has profound troubles at every turn which, in some ways, the politics is the least. He must face his four sons and continue to cope with his “trial separation” which may in fact lead to a more permanent status. But, for those who dare venture out into the arena of public service and seek the fame, power, accolades and trappings that come with high office, they should never forget they are under constant, sometimes rigorous scrutiny. Even more pointedly, Republican Right wing conservatives ought to reconsider their public positions on specific social policy matters in light of their personal behaviors and also recognize the true role of government in all our personal lives.