HOW MANY OF US FEEL THAT MUCH OLDER? 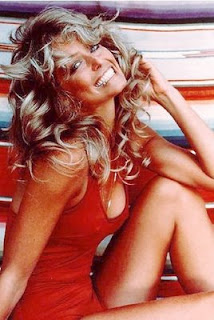 Fawcett in one of the most popular dorm room posters of all times.
One of “Charlie’s Angels” sleeps with the rest of the Angels tonight.


(June 25, Male Adolescence circa 1976) It was sort of embarrassing to sit in the living room and watch this particular program if Mom was there too. Thankfully, most nights at 8 0’clock, the majority of us were working. Still, we knew who she was, what she was and that she represented an idea, a certain hormonally driven perfection that we half saw, half imaged as we nodded off on the Uptown D Train. The A&P might have had our asses for so many hours after school but Farrah, had our undivided attention.

Some sociologists argue that those who came of age during the early to mid 1970’s were the greatest beneficiaries of the upheaval and “sexual revolution” of the 1960’s. It must be true.

We grew up in a world striped of its innocence and looked across a panorama our parents would blush at. Sex was everywhere. The “Pill” had forever profoundly transformed the nature of intimacy. Sex was now available purely for pleasure. With the fear of an unwanted pregnancy removed, casual sex became commonplace.

Sex became commercial in that sexuality was now blatant in advertising and all genres of entertainment. It was appalling to our parents; it all seemed just fine, natural, to us but there was an inherent awkward undercurrent that got in the way. The problem was that we were raised by parents whose sexual experiences were, for the most part, solely for procreation; ‘illicit sex’ was not only taboo - it was a sin - a violation of “God’s Laws”. But, the cat was out of the proverbial bag for good. The days of “Ozzie and Harriet” and all the other buttoned down TV programs were now extinct.

The lines of acceptability on the networks was constantly being pushed and pushed hard. By the time Farrah Fawcett burst onto the national conscience, our collective cultural ethos, mores and tolerance regarding sex had evolved.

The rest, everything subsequent to that seminal shift, is history.

Those of us of a certain age face reminders of the rapidity of times passage daily. Our points of reference ar fixed points on a shoreline we are always sailing away from. death has provided some newer points of reference, it has taken family and friends from us while adding dates of significance to our personal calendars. These markers are deeply private and personal. The death of an adolesent icon such as Farrah Fawcett today, is a shared milestone - an entire generation of men now feel just that much older.