TAX RETURNS FILED BY TODAY ARE FOR INCOME EARNED
IN 2008. WHOSE TAX CODE ARE THEY PROTESTING? 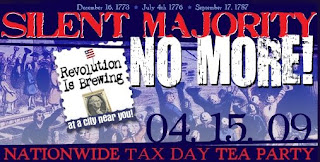 (April 15, Boston, Mass) The utterly ridiculous and absurd are now replacing reality and substance. At least for the “silent majority”, whoever they are.

From coast to coast today right wing conservatives of every stripe joined with anti-Obama, anti-taxation, antigovernment, anti-everything and anything that hints at our government functioning for the greater good, held protests to basically hold protests. Using the Boston Tea Party motif, these activists turned out in numbers well below what the right wing pundits who organized this charade expected. In some locations the turnouts were so pathetically low they were hardly noticed. In some places the planned protests did not even materialize. Wonder why?

The shear lunacy of this wholly fabricated non event defies the facts and plain truths of the issues these bozos claim to be riled up about. Every tax return that was required to be filed by today was for income earned in 2008. This “silent majority” may be comprised of the majority of Americans with short term memory deficits, those comatose for the past eight years and the simply simple who feed their paranoid hungers with the drivel spouted by the Rush Limbaugh’s and Bill O’Reilly’s of the media entertainment world.

The problems these imbeciles are taking to the streets over, encouraging a “mass” revolt against “the system” , all have their genesis during the Bush years. They seem to be unable, unwilling or incapable of acknowledging that George W. Bush, the worst president in our history, presided over the single largest expansion of the federal government since the New Deal, as well as the record deficit spending that has helped clog our economic arteries.

Apparently all these “fed up” regular folks believe that all their problems and the problems plaguing our country today began on January 21, 2009 with the inauguration of President Barak Obama. The absurdity of their complaints implies an unprecedented collective idiocy that is all the more amazing in its blatant deceptiveness. There stances on the various issues are simply not based on reality.

These protesters are so devoid of the ability to consider any issue objectively that they allow themselves to be manipulated by media blowhards far removed from the lives of the “regular working people” they claim to represent.


The Republican Party is experiencing mass seizures and shivers suggestive of the death throes. Their ass beating last November has obviously induced a viral type of frustration and anger that would be laughable if not for the ‘just below the surface’ element of gross irresponsibility it represents.

Not too much should be read into this “movement”. Today’s cockamamie “protests” are more of a collective right wing bowel movement then any real grassroots activism. For there to be a “loyal opposition” there must be two well defined, clearly articulated competing philosophies of policy and practicality. All the right wing and the GOP offers is shallow bullshit draped in pseudo-patriotism, misguided, often self righteous anger admixed with a strain of real hatred. This particular mixture got them pretty far last November didn’t it?

Talk radio galoots and ignorant pundits will not foment a mass upheaval no matter what they think or intend. Their hyperbolic tripe will not inspire their audiences to anything more than half-assed, bogus “protests” where the question of what precisely is being protested can barely be answered or ascertained.

While the “silent majority” where polishing their pictures of Ronald Reagan, oiling their shotguns, praying for the end of abortion, evolution, and modern science, the waves of “Middle of the Road” independents, “The Voting Majority”, passed them by. Actually, they trounced over them and their tired rhetoric, disproven theories and neo-conservative zealotry. They can call the results of last November’s elections populism or socialism; their juvenile, narrow minded labels are as meaningless as are their current grievances.

Oddly, this slender segment of society has only themselves and their arrogant republican politicians to blame. The GOP was hijacked years ago by hardcore right wingers largely obstinate just for the sake of being so. They constructed “movements” based on “social issues” that did not age well with the majority of voters who now identify as “independents.” People of good conscience, common sense and practical reasonableness fled from the ever shrinking tent of the GOP, ran from those self appointed leaders of that “movement” and now find themselves in the true, quantifiable, majority that swept president Obama and Democrats into office as the back draft of the horrible Bush administration was heading south.

Perhaps some good will come of today’s spectacle of cheap, political theater. Possible some of these people and others not as far out on the right as these clowns, will come ot realize they have been poorly served by their elected leaders, talk radio / cable TV heroes and their “core issues”. The country has passed them by. The scale and scope of our troubles are far too vast for petty partisan petulance. The GOP lost the election resoundingly and they should either participate in identifying solutions or simply get out of the way. If all they can do is support the freak shows conducted today, they will exiled further into the political wilderness as others more responsible, rationale and reasonable seek to govern. We need such people now more than ever. There is no longer any time or patience for the loudmouthed tactics of the right. All the gas bags, windbags, douche bags and scum bags should stuff their mouths with their tea bags and head on home.