THE REAL PROBLEM IN WASHINGTON 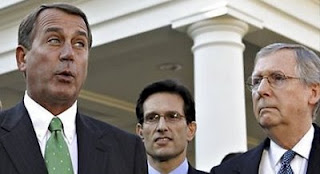 
(Feb. 8, Capitol Hill, DC) They are politician’s politicians; the top level of rodent floating on the surface of the huge cesspool of flotsam, jetsam and vermin that is the 111th United States Congress. They are not elected in a nationwide election yet their decisions have national implications. Some come from small, obscure Congressional districts and sparsely populated States. They are the ‘leadership’ of the House of Representatives and the Senate - the true holders of power in Washington DC.

By wheeling, dealing and all manner of nefarious, underhanded doings within their Party’s caucus, these particular eels manage to be ‘elected’ to these positions of prominence and power by their ‘peers.’ If that isn’t a sham and swindle of epic proportions, nothing else in our government is.

Our tripartite Federal government construct seems to vest most of the power in the Legislative Branch - Congress. The Executive and Judiciary Branches function as counterweights, in a sense, providing some degree of “checks and balances” to the whims and wishes of the Congress. While most Americans are under the impression that the President, our highest elected official chosen by the people, all the people, is possessed of the greatest authority in the land, this is most certainly not the case. The historical context of how our Federal government came to be a tri-branched republic makes for interesting reading. However, at issue today is not why our system is as it is but rather the current Congress and, in particular, the caliber of those individuals who attain the power positions in both Chambers.

This handful of people, accountable only to their small constituencies, literally control our Federal government absolutely. Yes, Presidential powers allow for some mechanisms by which the Executive can circumvent or over rule the Legislative but, for all intents and purposes, to maintain any semblance of order, the President must work within the confines of the Constitutionally supported, three, coequal branch architecture. Arguably and, as evidenced daily, there seems to be little “coequal” about it in practical terms.

Government framework aside, the Congressional ‘leadership’ is the nexus of power, able to set the agenda and allocate funds. Unfortunately the current leaders of both Party’s are among the worst of the worst the halls of Congress have ever seen (and that is saying a lot).

The Republican Leaders are a collection of heartless, mindless, unethical, corrupt, greedy, snakes completely devoid of any notion of upholding the Constitution, conducting the people’s business or having any positive impact on the way our government is administrated. Just looking at them is sickening; listening to their nonsensical rants is horrifying in light of the significance of the problems plaguing the Nation today. Kentucky Senator Mitch McConnell, the ferret faced, oily stain in the boxer shorts of the Senate is not merely an angry, ugly, evil, ignorant man: he is a dangerous man due to his position as Minority leader. His fellow Senators like John Kyl, John Cornyn, John McCain, Tom Coburn, Kit Bond, David Vitter and ALL the others, represent the polar opposite of what the Senate once stood for, what the Senate was meant to be.

The House GOP with scum bags like John Boehner, Eric Cantor and their fellow cowardly, criminally incompetent bastards are even more mindlessly partisan. These are the people to blame, America. These are the people holding the true power, the real strings to which all must dance. Not elected by all, accountable to none, free to obstruct and distract with impunity, these assholes are the root of all the government’s ailments today. They are unable to legislate or oversee effectively. They serve no one other than themselves and their supporters, as they malignantly seek only financial gain enhanced influence and power


For the Democrats, Senate Majority Leader, Harry Reid and the Speaker of the House, Nancy Pelosi are contrasts in style yet equally unqualified for the roles they currently play. Reid is a hapless old idiot whose rise to Majority Leader had more to do with his spinelessness than his ambition. His caucus needed a public face and a fall guy and Harry fit the bill to a tee. On the House side, Speaker Pelosi got her gavel employing ruthless, back room manipulative tactics and presides over her minions as an evil, vindictive, self absorbed, egotist. Her climb to the top was over the broken, bleeding heads and careers of many others. While the fossil Reid could use a face lift, Pelosi has had more plastic surgery (obviously unsuccessful) than Joan Rivers.

Americans cannot contact these people. Their web sites and contacts are designed only for comments from their constituents yet, they run the Country. Why is this? Why are they not accountable and accessible to the entire populace? The “Leaders” remoteness is but another sign of their arrogance and the protective nature of their incumbency, influence and hubris.

Not in over 70 years has this Country faced the complex tangle of problems we do today. Economically alone, we find ourselves not only on the verge of an unprecedented recession but perilously teetering on the edge of a broader collapse the likes of which would take decades to recover from.

Our profound problems at home are not hidden from the world; a hostile world where we are currently engaged in wartime activities on two fronts, bogged down simultaneously in George Bush’s Iraq War of Choice, and the terribly mismanaged fight against the actual terrorists who attacked on our soil, and their supporters in Afghanistan. The scale and scope of our domestic challenges are intricately woven into our national security concerns. We are stretched paper thin around the world while we list dangerously at home taking on more water every day.

The people’s anger should be directed at the so called “leaders” in Congress. They are the true enemy, they are the real threat. As they play politics in the cloakrooms of the Capitol, childishly seeking advantage over each other, tritely keeping score in the game where only they know the rules and only they can benefit from the outcome. The rest of us be damned is their motto as clearly demonstrated by their actions and inactions.

The status quo seems to be an intractable reality where no larger truths can penetrate. After the horror, in the wake of the exposed failures after 9 11 01, nothing changed. Apparently that epic event was not sufficient to end the partisanship and motivate Congress to act appropriately for the good Our Nation as a whole. Nope. Now, in the face of catastrophe, the belligerent infighting continues, the scum bags keep evolving into greater scum bags as the process of actually governing remains rusting in silence.

Where does it end?