IN GRIEF AND MOURNING WE CIRCLE 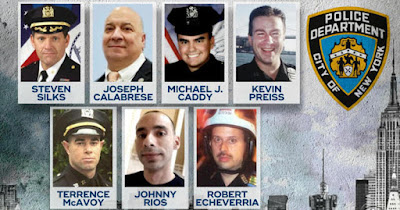 
(August 21, 2019 Jamaica, Queens, NYC) We are by nature of our work an insular lot, we tend to stay within the community of our peers rather than to establish friendships with civilians.  Collectively and individually we abide by an “Us versus Them” mentality.  This is not born of arrogance but rather a means of self-preservation. It simply becomes too tiring, to say the least, to deal with civilians be they neighbors or even extended family, trying to answer their often-belittling questions posed with a sarcastic smirk and entertain them with asinine banter and “Cop stories”. Even if one were inclined to engage them and “help” them understand what it is we do, what exactly it is we see, smell, hear, and deal with daily, it would be impossible, a miserable effort of futility.


As the Indian Summer of early September 2001 gave way to Autumn, memorial services of all kinds, wakes, Shivas, funerals and burials occurred with increasing frequency as more bodies and remains of the murdered were recovered from the site of the World Trade Towers; “The Pit”, Ground Zero, The Pile, the smoldering wreckage from the terrorist attacks of 9/11.  The numbers of the deceased was staggering: FDNY lost 343 MOS, PAPD 37 MOS and the NYPD suffered 23 victims some whose remains have yet to be identified and likely never will be despite the on-going work in the lab at the OCMENYC. It was days, weeks, and months of agonizing grief and mourning; it was unparalleled in the history of Our City and Our Country.  The civilian death toll was equally stunning and comparatively dwarfed the MOS deaths of that infamous day. In churches, synagogues, funeral homes and cemeteries throughout the Five Boroughs and beyond into the suburbs nary a day passed without a service for one of the lost. The magnitude of the loss and the absolute innocence of the civilian deaths have forever altered countless lives as well as our way of life in myriad regards. Yet each of those deaths was, in a horribly twisted practicality that allowed us all to retain our sanity, oddly enough “understood”; our lost were victims of a terrorist war, an unprovoked attack by Islamic extremists, a war perpetrated on our shores, not one of our choosing.


For Members of Service of the NYPD the last ten weeks have been a time of another manner of death for nine of Our Brothers.  We’ve once again found cause to travel through The Boroughs and beyond to pay our respects to those we have lost.  These losses are more difficult to fully understand when compared to the other ways a Police Officer can die in the Line of Duty (LOD). But we all must tread lightly here in that no one among us can know what drives a man to take his own life regardless of profession or position.  It is far too simplistic to blame The Job – Our Job - for each of these deaths while also acknowledging there are pressures and circumstances unique to our line of work.


What leads a soul to take their own life? While there are many possible causes the ultimate effect is constant; an undeniable proof that something was transpiring within the psyche of the individual who opts to end it all. Suicide just seems so far beyond most others comprehension that they need to know why; why did this happen, and could I have done anything, anything at all to prevent it?  Rarely are such questions ever answered.  Death by suicide typically leaves more unknown than known.  The answers are held by the suicide into the grave.


Within the confines of our own private experiences, perceptions, perspectives, and all that constitutes our conscious and subconscious terrain, we live our lives largely alone in our present thoughts and memories. Who really knows another?  Who among us can lay claim to possessing insights – real insight – to the private lives of those we may be “closest” to? Philosophers and theologians since antiquity have pondered such deeply personal, ephemeral, and eschatology thoughts and none could come close to adequate answers.  Psychologists, psychiatrists, and neurologists have added to the study of the human brain/mind/soul conundrum voluminously.  Yes, more is known and understood about our internal existence than ever before but all of this accumulated “knowledge” has really not advanced the study of how our mental monolog corresponds to and with our actions, decisions, desires, and the myriad flotsam and jetsam that constantly flows through our neural realm.


As Police Officers we very often interact with people who are the most vulnerable in our society, those who are circumstantially sucked into abuse and violence, chaos, raw emotions, and unstable interpersonal dynamics.  We have all responded to domestics where we encounter a woman showing the obvious signs of a recent beating.  In these same apartments we might catch a fleeting glimpse of young wide-eyed children peering out from under a bed or around the corner of a narrow hallway knowing what they had just witnessed while pondering what scars they may have already incurred and will likely carry with them as they grow up..  Those young eyes tell the same story as that of their Mom’s face.  We all have images indelibly inked onto our souls; we see the worst of the worst routinely.


Ours can be a draining profession often leading us to question the validity of some of what we believed when we were younger.  Our view of people, our perception of humanity, good, and evil grind against each other like tectonic plates in our minds. There are ways to “detach” from The Job once we leave work.  However, the real trick may be to avoid The Job “attaching” anything to us, to prevent what we deal with from altering us in fundamental ways.


Postscript:  Since we began publishing on this site in 2007, we have always addressed the issues surrounding the suicides increasingly pervasive among those in our profession.  NYPD has been locked in a cycle of suicide by our Brothers that is unparalleled.  We implore anyone who is experiencing difficulties, no matter their origin, to speak with someone, to seek professional help through the Department or privately.  Take comfort in the fact that you are not alone.  Others have found themselves mired in the quicksand of depression or despair, that can ultimately lead to the belief that suicide is an option.

Posted by Brooding Cynyc at 1:00 AM