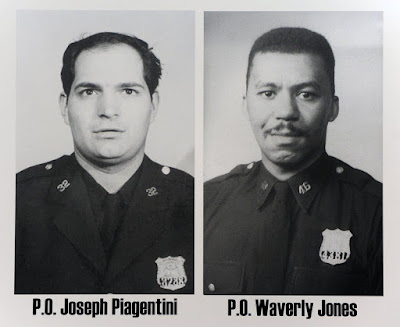 Officers Piagentini and Waverly are forever Honored, Remembered, and


Respected for their Service and Sacrifice

(Wednesday March 14, 2018, 32nd Precinct, 250 West 135th St.) He has an official website.  He has earned degrees, written all sorts of doggerel, and radical tripe.  He has the support of some ill-informed, arrogant Hollywood backers who have adopted his plight as their cause celebre.  He has allegedly spent the last 45 years living with an unblemished record.  On May 21, 1971 he ambushed two NYPD Officers with a bogus 911 call and murdered them in cold blood.  One of the young Officers, Waverly Jones, died immediately after being shot.  The other Officer, Joseph Piagentini the father of two young girls plead for his life.  Herman Bell tortured the mortally wounded Officer shooting him 22 times delivering the final rounds from Joseph Piagentini’s own gun.  He was an active member of the Black Liberation Army, a violent radical group birthed during the racial strife of the late 1960’s. Bell, until very recently, had never expressed any remorse for his role as an executioner.  Quite the contrary as is evidenced by some of his prison writings. And now, perhaps as early as the end of the month, Herman Bell, now 70, will walk out of the Shawangunk Correctional Facility in Wallkill a free man. To label this act a travesty of justice is a gross understatement. That the New York State Parole Board has granted this Cop killer his freedom is an insult to all who are and have ever served in the NYPD and Law Enforcement writ large.

There are many parties to this travesty, many groups and individuals who have worked over the years to recast Bell as someone he is not – a “changed man”.  He only admitted to having some small degree of remorse before his parole hearing in 2016 when he calculated that doing so might be advantageous to his cause.  The fact of the matter is that for virtually his entire prison sentence he enjoyed some notoriety in the twisted subculture among incarcerated convicts, precisely because he was a “Cop killer”.  His street reputation and Black Liberation Army (BLA) credentials afforded him a comfortable life in the various facilities where he served his time. Bell saw himself as a “political prisoner”, an activist and “a tireless soldier in the fight for justice”.  He has never disavowed his allegiance to the BLA and the Black Panthers.

Speaking earlier this morning with an old acquaintance, a retired Correction Officer who had served many years in a penitentiary where Bell was housed recalled some of his observations from over a dozen years ago.  Asking to be referred to only by his first name, Matt, he recounted that, “Bell back in those days had never lost his nigger swagger…you know that kinda hitch in the step strut that all the niggers used to have”.  Matt continued, “He (Bell) enjoyed something of a charmed life inside because of his status as an “OG” -an Original Gangsta, because he was “Old School”, and most definitely because he was a Cop killer.  The younger convicts treated him like royalty and Bell always had a smirk on his face when I interacted with him or any CO spoke with him.  It was a condescending smirk if that can be said but...you know what I mean.  It is a sad day for so many knowing this fuck who participated in the murder of 3 Police Officers will soon be out”.

The world has moved on, times have changed since the “War Years” in large cities across the country infected by virulent racial strife, open warfare against Law Enforcement Officers, and the cultural and societal upheaval that it may be difficult for younger people to understand.  But, we remember; we, of a certain age, remember all too vividly those days.  We remember at odd times and when we each make a private pilgrimage to the NYPD Memorial Wall in Battery Park.  We, NYPD has a historic memory and an institutional memory.  There is an unbroken cord that runs all the way back to 1900, to 3100 Spring Street, that binds all the men and women who have ever served and serve to this day. We are bound in duty and honor; bound by the sacrifices of service, the fact that we are indeed all Brothers and Sisters serving for a greater good but also giving our utmost for those we work with.  Our loyalty is neither blind nor blinding.

When we stand in front of that marble wall and trace our fingers over the engraved names we are most familiar with and those whose stories have been passed down by our seniors when we were just out of the Academy and beyond, we feel the connection and know full well the meaning of “But for the Grace of God there go I”.  Ours can be a brutal business; ours is often a risky endeavor.  But it is what each of us has chosen and with our choice comes the obligations, powerful obligations to the NYPD as a whole and those we serve with and those we seek to protect.

Yes, Herman Bell will walk out of prison a free man, allegedly a “changed” man deemed so by the NY State Parole Board to be “no longer a threat to society”.  How does the Parole Board make such a determination, how can they act with any degree of certainty?  How does a panel composed of politically appointed flackies and hacks make this kind of decision?  Are they clairvoyant, do they possess the uncanny ability to see inside a murders mind and soul?  No, it’s all a crap shoot, and they hope for the best.

Bell’s family, for what it is 40 years hence can celebrate his homecoming.  He can return to his peers as a hero having survived incarceration. Members of the Waverly Family may have forgiven Bell; for the record, none of the Piagentini Family has done so.  To them and all of NYPD this decision stands as an insult.  Those of us remaining who remember those dark days and the atrocities committed by Herman Bell can only hope he suffers a long, protracted painful fatal disease. Divine retribution, Celestial justice is our only desire.

Posted by Brooding Cynyc at 2:29 AM

Hopefully Bell won't be jay-walking and get run over by a patrol car answering an emergency call. I guess that would be called justice served.