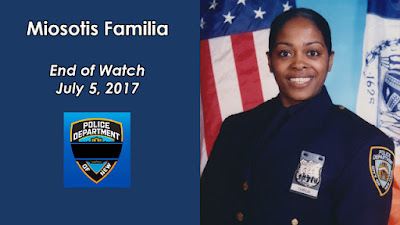 (Wednesday July 5, 2017 46th Precinct) The audio released of the radio call NYPD Officer Vincent Maher made immediately after his partner, PO Miosotsis Familia was shot in the head is chilling for any Cop to hear.  There is no mistaking the urgent terror in his voice as PO Familia lay bleeding.  "Shots fired! 10-85!"… "My partner's shot! My partner's shot! Hurry up central!".  The radio code 10-85 means “Officer down” and no other code propels fellow Officers into an adrenaline rush as those words still echo where ever they are heard. Despite the frantic and hasty response by EMS to the scene of the shooting and the efforts of the ER doctors at St. Barnabas Hospital Officer Familia’s life could not be saved.  Officer Familia’s life’s work intersected with evil as she sat in the Mobile Command Unit parked on 183rd St. & Morris Avenue. The assailant, a lifelong criminal ex-con was shot and killed a short time later by other Officers assigned to the 46.

Officer Familia was not shot while on patrol.  She was not killed during an altercation while assigned to a plainclothes Street Crime Unit in the 46th Precinct. No.  Her life was ended by a single bullet to her head as she sat near the end of her tour doing paperwork in a Mobile Command Unit parked at East 183rd Street,and Morris Avenue in Fordham Heights. She was assassinated, pure and simple.  There can be no “motive”, no cause, no reason for her cold-blooded murder excepting the fact she met her fate by the hands of evil.

Evil, in this case has a name and face yet there is nothing about the assailant’s life that was in any way, shape or fashion redeemable; his brand of evil was not the product of all the usual “societal ills” typically pulled out for display by the media.  If he grew up in poverty, used drugs, began committing petty crime as a juvenile is all irrelevant.  Alexander Bonds’ life was not one of victim-hood; his life was defined by evil, to think otherwise is simply inconsistent with the truth. As is so often the case, his penchant for evil was a matter of choice and he chose to allow the inherent evil within to flourish.  After meeting his own fate from the bullets of other Officers, a few short blocks away his lifeless body laid on the sidewalk as just another piece of gutter trash – scum – as useless a carcass in death as it was during his life.

Details are emerging regarding Bond’s mental health history, psychiatric medications prescribed to him, as well as his public conduct in the neighborhoods he frequented.  His girlfriend has claimed she tried to have him admitted to a hospital earlier in the day and that he had a history of previous hospitalizations for psychiatric issues.  Whatever his diagnosis, disposition, conditions or circumstances he murdered an NYPD Officer simply because she was a Cop.  Assigning any greater "motive" to his vile act is disingenuous at best, blindly liberal at worst.  He killed a Cop because he wanted to, because he chose to, because it was his nature. On his "medications" or not Bond was a worthless, violent, hate filled nobody.

Bond had posted several anti-Police rants on Facebook in the past as well as in the days leading up to his heinous act.  He allegedly told family members and friends that he “wants to kill somebody”.  He followed through on his twisted desire by assassinating PO Miosotis Familia.  That he was killed soon after is a rare episode of “street justice” that no doubt spared the taxpayers of New York the expenses of incarcerating this worthless scum.

His name will soon recede from the public’s consciousness being remembered only by those he was most closely related to.  PO Familia’s name will forever be honored, remembered, and respected for her Service and Sacrifice.  God Bless, Officer, God Bless and Godspeed.

Posted by Brooding Cynyc at 2:09 AM