FBI DIRECTOR’S BOMBSHELL:
THE LAW IS THE LAW
HILLARY IS NOT ABOVE THE LAW
COMEY MAY BE ALL THAT STANDS BETWEEN HILLARY AND THE OVAL OFFICE 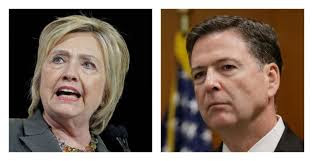 COMEY’S DECISION PERHAPS A “COME TO JESUS” MOMENT.
DESPITE KNOWING HE’D TAKE FIRE
HE FINALLY DECIDED TO FOLLOW THE EVIDENCE,
ALLOW HIS AGENCY TO ENFORCE THE LAW

(Sunday October 30, 2016, NYC) In an unprecedented extraordinarily controversial move FBI Director James Comey announced Friday morning that he was reopening the agency’s investigation of Hillary Clinton’s e-mail affair after having concluded that “no charges” were warranted in the case in July.  Comey’s decision to make his intentions known by sending a letter explaining his rationale to ranking members of Congress is being seen as the most significant “October Surprise” since President Richard Nixon fired a Special Prosecutor looking into the facts that would ultimately come to be known as Watergate.

The motives behind Comey’s campaign rocking statement of intentions vary wildly depending on which side of the political spectrum one is aligned with.  Democrat’s that hailed Comey as a “true, steady, non-partisan” man of integrity in July are now excoriating him almost as Satan incarnate.  Likewise, Republicans that slammed him mercilessly now laud him as a “hero”.  With his well-known, widely heralded reputation as a man of honesty, unimpeachable non-partisanship, and high moral integrity one ought not be swayed in assuming Comey acted in bad faith in this development into what former FBI Assistant Director James Kallestrom the “crime family” known as Bill and Hillary Clinton and all their related enterprises from her tenure as Secretary of State, presidential campaign, (Bill and Hillary’s) their Clinton Foundation and self-enriching practices.

Perhaps Comey’s Irish Catholic conscience finally got the better of him and he may have realized in a moment of introspection that he and all the powers invested in him in his Office is all that stands between the real possibility of a Hillary Clinton presidency; having an “unindicted criminal” in the Oval Office.  His history of integrity and honesty one might speculate would not allow him to “sit” on this new information that came to light in an unrelated FBI probe into the former husband of Hillary’s long-time closest aide and confidante Huma Abedin.  Abedin’s estranged spouse is none other than “Carlos Danger”, the moniker employed by disgraced former Congressman Anthony Weiner during his sexting exploits with a minor on-line.  The FBI is conducting an investigation into Weiner’s on-line activities which span at least the past five years.  Allegedly some e-mails between Abedin and Hillary while she was secretary of State and more recently as well as among others in the “Clinton political/financial/influence peddling orbit” were found on a computer Weiner shared with his former wife.  That the disgraced sexual predator Weiner may in fact be the last straw in Hillary’s decades long saga of ruthlessness political ambition and calculation, her well documented history as a pathological liar, and her scorched earth politicking is an ironic twist near the end of the most twisted presidential race in the 240-year history of our Democratic Republic.

In July Comey’ decision was seen as a capitulation to political pressures.  In just one odd twist of events that cast another shadow over the waning days of the investigation, Comey’s boss, Attorney General Loretta Lynch met with Bill Clinton for 40 minutes of discussing “grandchildren and golf(?)” when both of their airplanes just so happened to be idle on the same tarmac in Phoenix on June 27th. Just days after their “innocent” highly suspicious meeting that strained the limits of propriety if not believability Lynch announced that she would “defer” to the decision of the FBI insofar as leveling charges against anyone under investigation including Hillary Clinton.  Her decision effectively foreclosed the deal that would allow Hillary to dodge indictment.  Her announcement and Comey’s summary of findings created an “uproar” among career prosecutors in the DOJ as well as the FBI.

In his July 5th statement he called Mrs. Clinton’s handling of classified information by using a private internet server “extremely careless” and admitting that had any of his employees acted in a similar manner they would face a range of serious sanctions up to and including “dismissal” from the FBI.  The FBI has spent the last year conducting their investigation having interviewed the former Secretary of State on July 3rd.  His statement also included a damning “non-indictment” of Hillary Clinton’s blatant lies, destruction of evidence under subpoena, as well as damaging testimony from some of her closest aides and campaign operatives that proved they were aware of the legal hazards Clinton’s e-mail practices posed.  Consensus opinion in both the DOJ and FBI was that Hillary’s “reckless, irresponsible activities that ran contrary to all statutes of confidentiality and handling of information of a sensitive national security nature” warranted not only an indictment but a “full-fledged prosecution”.  But that was not to be the case and the Hillary juggernaut steaming towards her presidency rolled on unimpeded.

Our presidential politics have a long history of potentially game changing revelations that have come to be known as an “October Surprise”.  Past campaigns have held back explosive items unearthed earlier while conducting “opposition research” in the hope that a last minute revelation will have the maximum effect inflicting fatal damage to their opponents White House ambitions.  Typically, these nuggets of past impropriety and scandal do not have the intended affect and seem to fade away as rapidly as they ignited.  Many political observers and academics have asserted that some of the allegations that Hillary’s opponent, Donald J. Trump, has behaved in a “sexually predatory manner” in the past and the parade of alleged victims of his crude, lude and lascivious alleged episodes have been viewed by many as the Clinton camp’s attempt of an October Surprise.  Clearly the fact that this ever increasing list of women alleged to have been so victimized, some claiming their victimhood occurred in the past up to 20 years ago seems on its face to be a non-too convenient series of disclosures intended to further damage Trump’s already high negative ratings among women voters and, in particular white college educated suburban women, a key demographic for both candidates and one that Hillary should naturally attract.  But that has not been the case.

Despite the potentially historic election of our first woman president, Hillary’s overall un-favorability rating coupled with the general public’s perception that she is “untrustworthy, dishonest, and will say anything to anyone audience” to be elected has this race at a virtual tie in the most recent national polls according to those conducted by the Wall Street Journal, CNN/ABC and other highly reputable pollsters.  It is beyond infuriating to Hillary and her cadre of surrogates that a man with no military service or history in public office, a billionaire Manhattan real estate developer and reality TV star, is actually neck and neck with the candidate touted as being “the most qualified person to ever run” for the presidency.  That in and of itself is a gross mischaracterization and unabashedly arrogant, inaccurate and in some ways telling representation of a woman whose past “successes” can all be attributed to the fact that she married a very gifted politician in Bill Clinton. Hillary’s ascendancy has been one of a bastardized nepotism, quid pro quo corrupt politicking and being the benefactor of the most powerful political machine in the last 50-plus years (possibly ever).

It is possible that this October Surprise may prove to be a decisive factor for those undecided voters wary of both candidates; those who perceive their ultimate choice as nothing more than the “lesser of two evils”.

Hillary supporters can complain and grouse wildly and loudly but Hillary and her insulting, flippant lack of cooperation with the FBI, congenital absence of honesty, hubris, sense of entitlement and blatant disregard for federal laws and protocols has landed her in this mired position a scant 9 days from the election.  That the bizarre appearance as a factor in this long bruising campaign is Anthony “Carlos Danger” Weiner and Hillary’s soulmate Huma Abedin, is oddly appropriate.  She has dodged and ducked often artfully a myriad of scandals and malfeasance's, abuses of her various Offices and their vested powers to such unmitigated depths of criminality and corruption, that it is high time she exit from public life.

Some in the media claim there is a degree of “Clinton Fatigue” among the electorate.  That has been proven to be a true assessment of a wide swathe of the public’s opinion.  They are simply tired of her and her cronies; they’ve grown weary of her face and voice, her lame excuses for past wrongs and shallow appeals and pandering for their votes.  Yes, much of America has already decided the we have had quite enough of Hillary Clinton.  The only way to permanently excise her from our national consciousness, prevent her hands to be on the official levers of power that are bestowed upon a President of the United States, and remove her from our lives is to vote for Donald J. Trump.

Posted by Brooding Cynyc at 6:00 AM