NY GOV CUOMO INSTALLS YET ANOTHER LAYER OF “POLICE OVERSIGHT” 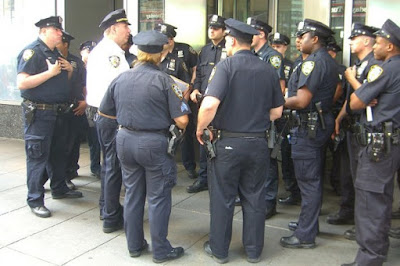 (Thursday July, 9 2015 Mott Haven, The Bronx, NYC)  The Members of Service (MOS) of the NYPD who patrol this gritty precinct in the South Bronx are in many substantial ways a world away from the public eyes of many of the more “high profile” precincts in the City such as those in Manhattan.  While much has changed in this corner of The Bronx including the Port Norris and the Melrose neighborhoods of the 40th Precinct, there remains a tenacious criminal element that make this one of the busiest Precincts in the City.  The narrow blocks of historic buildings and pre-war 5 story walk-ups can take on an air of menace after the summer sun slips off into the western horizon.  Gang related activity thrives and it is not unusual to hear random gunfire punctuate the familiar City sounds of a Bronx night.  Speaking to some of the men and women of the 40th Precinct about recent politically driven efforts to “reform” the NYPD and to install another layer of outside “oversight” to the already bloated upper echelon structure in One Police Plaza, you will hear the frustration of Cops who feel abandoned by their leadership and pawns in a potentially lethal political games of charades. In the 40th Precinct however, you will find some of the most dedicated Cops, Cops as committed and invested in this community as any of the thousands of hard working residents who live, work and raise their families here.

Life can be cheap in Mott Haven; violent death roams these streets as a familiar specter sometimes precise and pin point, at other times callously random.  Innocent very young children have died in the crossfire of thug on thug violence and, at times it is not too far a stretch of memory for those old enough or imagination for the younger Cops, to picture this segment of the South Bronx during its infamous “War Years” from the mid 1960’s through the mid 1990’s.  Despite some dire predictions that Precincts like the 40th are just the outliers of what will soon be a City-wide descent back to the “bad old days”, enough progress has been made to make that likelihood very remote if not impossible.

What you also hear from MOS of the 40th and Cops from Precincts in upper Manhattan, Brooklyn South and slivers of Queens is an emerging sense of reluctance and trepidation at play consciously as they go about their patrol tasks.  It has become fashionable, politically correct, and somehow “noble” to criticize and lambast Cops across the country in the past year.  Any Cop will tell you that it is the instincts and “feel” for the streets they work developed over years that allow them to perform at their best while keeping the general public and their colleagues safe.  Any measures designed to curtail, limit or otherwise restrict a Cops street judgement endangers lives by a significant factor.

After years of bitter, rancorous debate in 1993 Mayor David Dinkins provided the executive mandate that allowed for the creation of the Civilian Complaint Review Board (CCRB) to function as an “independent” body tasked with handling public complaints about Police misconduct.  In the years since it assumed its current structure and mandate, there has been an uneasy, often fragile relationship between the CCRB and the NYPD.  It has typically been as aggressive in its mission as whomever the sitting Mayor has been.  The last years of the Michael Bloomberg administration had the two entities “peacefully coexisting” for the most part.

The NYPD has their own Internal Affairs Division (IAD) that has proven their worth in eliminating some of the most flagrant corruption and in weeding out “dirty Cops” since the heyday of the Knapp Commission in 1970 and the controversial Mollen Commission in 1992.  Other efforts have been conducted over the years including major “sting operations” that did in fact identify and prosecute MOS after lengthy investigations.  (It should be noted, just for the record, that among the rank and file MOS, members of IAD are voracious rats intent on uncovering Officer misconduct and aggressively prosecuting.  Their value is limited in part because of their history of often employing their own “corrupt” means towards an end that is the ruination of MOS careers.  Some of their tactics have been proven to constitute entrapment but the damage is done).

Aside from IAD each Borough has an Office of the Chief Prosecutor more than adequately staffed with attorneys, paralegals, clerks and a contingent of investigators.  A line of duty shooting is currently subjected to a rigorous after action report and debriefing as well as being reviewed by the Borough Prosecutor’s Office.  This is a level of oversight that has been reliably effective, objective, transparent and fair.  Despite the expected public outcry of “cover ups”, the silence among MOS in the form of The Thin Blue Line, and their perceived notion that the Police do function with impunity, the system has worked well.  The public is not privy to the deliberations of a Grand Jury so they are equally disqualified to pass judgement on its efficacy.

The New York City Department of Investigation  (DOI) is one of the oldest Law Enforcement Agencies of its kind.  With a broad mandate the DOI is a corruption fighting force investigating any allegations of corruption, fraud, and misconduct across the array of City agencies and entities contracted to work for the City.  The NYPD has an Inspector General (NYPDIG) whose Office receives its license to function by the DOI and the City Charter.  With little fanfare on May 27, 2014 Philip K. Eure assumed the post of NYPD Inspector General and, for all intents and purposes, that was the one and only time he has been heard from.  Throughout the past year as the NYPD faced harsh criticism, grand jury investigations and an ever growing chorus of Police critics, Eure has been out of the public eye.  This is somewhat bizarre since he above anyone else is in a position to launch oversight efforts such as those related to the Eric Garner case.  If he is on the job while opting to remain out of the public eye he has been a huge success.  It is difficult to say with any degree of certainty what he has been doing since taking the helm as NYPDIG. It is the responsibility of Eure and his Office to provide oversight as well as review all cases of alleged Police misconduct.  It seems now that Governor Cuomo’s announced proclamation that such cases will fall under the purview of the NY State Attorney (NY State AG) General’s Office that Eure has lost any credibility he may or may not have had at the beginning of his tenure.

Mayor Bill de Blasio ran for the Office he now holds pandering to some of the malcontents and special interests groups who had seen themselves as “long suffering victims” of an abusive, racist Police Force, one that did not “value” Black lives, practiced SQF disproportionally with young men of color, and could maim or kill with impunity.  His aggressive anti-Police, anti-Stop, Question and Frisk (SQF) campaign did resonate with certain factions across NYC and it was due to their support that he won the election.  Odd thing about campaign promises is that when you are voted into Office based largely on a specific platform those who cast their votes for you expect you to make good on your campaign rhetoric.  As a candidate/critic of NYPD, de Blasio came into power with a Police Department that felt alienated by the new Mayor.  He did nothing to “mend fences”, so to speak and, if anything, he doubled down on his harsh assessment of the NYPD and in particular how MOS interacted with the Black and Brown communities.

The new Mayor quickly learned that campaign hyperbole was vastly different from having to actually conduct business and work with the NYPD.  Perhaps for political cover he hired a former NYPD who had been very popular in the mid 1990’s in the Rudy Giuliani administration Bill Bratton, to serve as his NYPD Commissioner.  In the 20 plus years since Bratton left the NYPD he became more of a politician and less of a Law Enforcement Officer and that transformation was an additional insult to the injuries de Blasio’s campaign had inflicted on the rank and file of the NYPD.

Bowing to public pressure and capitalizing on the recent trend of disparaging MOS of the LEC, Cuomo now approves a plan to have the NY State Attorney General review some of the “use of deadly force” episodes.  This raises some important questions regarding jurisdictional authority, the State’s encroachment on the City’s legal prerogatives, and is ripe with the potential for creating a tangled knot that will only make the investigation and review process of such episodes needlessly top heavy.  There remains unanswered the question as to when and why the NYSAG will be “invited in” to conduct an “independent investigation” and to what extent they will be cooperating with the local Borough Prosecutors and the NYPD itself.

The NYPD like any LEA closely defends its territory and the possible incursion of representatives of the NYSAG into NYPD matters will only prove to erode the jurisdictional and territorial boundaries as recognized by the NYPD.  Given the profound corruption in Albany and years of failure by Governor Cuomo to address the State’s problems in any meaningful way, it is difficult to see the validity in this his latest folly.