NYPD BURIES ANOTHER OF ITS OWN 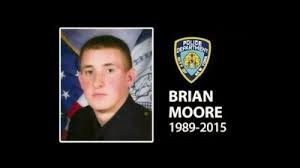 
PERILS OF POLICING, “CITY” DOES NOT MOURN WITH NYPD


(Friday May 8, 2015, NYC) The sun has yet to show its face on the eastern horizon while at this early hour members of the NYPD are taking their dress blues out of closets after having made sure their white gloves were clean and pressed. They will don the official uniform of their Department and travel out to Long Island to pay their respects to Brian Moore, one of their own.  Many will report to their regular Precincts and Commands and after roll call pile into a Department car or van and make the drive out to Seaford.  They will make that trek in solemn silence with heavy hearts fully cognizant of the fact that “but for the Grace of God there go I”.  They will assemble in military precision as the coffin bearing the body of Police Officer Brian Moore is removed from the church and placed on a hearse for that slow ride to the cemetery plot in which he will be interred.  The ranks of the dress blues and other uniforms representing Police Departments and Law Enforcement Agencies from across the country will stand as one as the Moore family lays their young son to rest.  The haunting sounds of the bagpipes will sound across the expanse of the cemetery and it will be difficult for most in attendance to not shed a tear.  When one of NYPD’s own is killed in the line of duty every member feels that profound gut punch sensation. Every MOS, present and past, experiences the most visceral of reactions as they are forced to confront the stark reality of their chosen profession.  Death, the prospect of unnatural violent death at the hands of a depraved, heartless soul, or just a criminal without regard for life, looms as the outsized presence in the corridors of each Cops soul.  The ever present possibility, the omnipresent potential is kept at bay by whatever intrinsic or contrived, largely un- and sub- conscious machinations that each individual possesses.  Days such as today render, at least for a few hours, all such defensive mental gymnastics futile and foolish.  Mourning and grief, grief that literally claims raw tissue of every MOS’s soul, is never absorbed or forgotten.  It lingers on the periphery of dreams and idle waking moments.  Such thoughts elicit doubts, fundamental doubts as to cause, mission and purpose.  For the men and women of NYPD the murder of a Brother or Sister is as wrenching as the loss of a parent.


Working out of the 105th Precinct in Queens, Police Officer Brian Moore was engaged in a plains clothes patrol similar to one he had previously been commended and decorated for when he arrested an assailant with a an illegal firearm.  When he and his partner approached a man they had witnessed adjusting something along his waistband they pulled their unmarked car alongside of him. They asked him what he was carrying on his waist and he immediately opened fire shooting PO Moore in the face resulting in a lethal injury that would ultimately claim his life a few days later.  Could his tragic untimely death have been prevented?  Given the dynamics of those critical moments, absolutely not.  He was involved in an abundantly hazardous detail that was infused with a level of risk that is difficult to quantify or adequately explain to the average citizen – to any outsider.  Despite the recent crescendos of protest and brutal, grossly inaccurate criticism against Police Officers in the wake of several media hyped episodes of questionable Police tactics, men and women of good character and faith put themselves out onto the often ill-defined frontier and the always hazardous front line of keeping order and protecting those who cannot protect themselves.  Their task is often uncomfortable and untidy through the digital lenses of the increased preponderance of cell phone cameras.  In our open democratic society such scrutiny is the Constitutional right and sacred legal prerogative of any and every bystander and witness.  But the advanced technology readily available to anyone who can afford to purchase such a device does not have the sophistication to provide context.  Any image or video clip can be damming untethered to the scenario that unfolded prior to the moment such a camera was aimed in that certain direction.


Today is not the day for political discussions or examination of the larger issue regarding LEA interactions with minority communities.  That debate will rage, it will wax and wane as the case against the six Baltimore Officers who are facing charges from recklessness to depraved heart murder.  Today is a day to push all that reeking baggage aside and each Officer must come to terms with the realities of his or her chosen profession.  The unity shown today as thousands of LEA’s from across the country came here to pay their respects is powerful demonstration of the unity among members of the LEC.


At times such as this politicians and columnists like to comment that the entire City of New York grieves along with the NYPD family.  That is simply not only untrue but literally impossible.  Yes, the average citizen might read of the Line of Duty death of an Officer and feel sympathy for his or her family; they may even say a prayer or, at least for a few moments, consider the inherent perils of policing in our City. But they cannot mourn along with the Members of Service and their immediate families because they are not privy to the hundreds, the thousands of daily triumphs and tragedies every Police Officer experiences during their career.  They do not know the anxiety a spouse experiences when the phone rings in the small hours of the morning fearing the call will bring unwanted news of their spouse’s injury or death.  They cannot and do not know the City as an MOS does; they are blissfully unaware of what transpires each day and night across our Five Boroughs.  They do not see, feel or taste what a street Cop does; they have no inkling of the particulars of policing, of the use of force born out of situational necessity that is potentially an element of each and every call they respond to.  No, they are pedestrian bystanders as unfamiliar with the City Cops know as they are with the surface of the moon.


Brian Moore’s name will be added to the list of MOS’s who have been killed in the line of duty; it will be added to the NYPD Memorial Wall at One Police Plaza.  The City has already moved on after absorbing the news of Officer Moore’s death but for the Moore family and the NYPD family his passing will forever be remembered, honored, and respected. Rest in peace young Officer, you are safely Home now.  Amen.

Posted by Brooding Cynyc at 4:01 AM