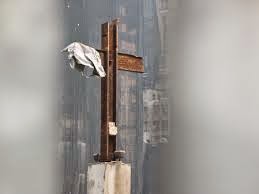 
UNNATURAL DEATH, THE PASSAGE OF TIME,


REMEMBERANCE, TRIBUTE TO THOSE TAKEN,


GRATITUDE FOR WHAT WAS GIVEN,

(Thursday September 11, 2014. Battery Park, NYC)  The familiar annual rituals were conducted with all due respect and solemnity earlier at the World Trade Center Plaza.  Names of those who perished in the attacks here in New York City on February 26, 1993 and September 11, 2001 in the World Trade Center Twin Towers were read by members of their families as were the names  of those who died 13 years ago today at the Pentagon in Washington, DC and a field in Shanksville, Pennsylvania.  The haunting sounds of bagpipes and the crystalline trumpet notes of Taps provided an appropriately moody soundtrack before and after the reading of the names.  The polished fire bell was struck, moments of significance observed in silence, and within hours the bulk of those assembled had departed to home, their lives and families no freer of remorse and grief than they were when they left home this morning but certainly a little consoled for having mourned among others whose experiences they shared.  As public an event as 9-11-2001 was, it was a deeply personal day for New Yorkers and we wear a significantly more complex vest of emotions connected with what occurred on that day, the days, weeks and months immediately after and right up until today.

Being this close to New York harbor, the briny scent of the sea is prominent as the breeze from the northwest hustles the air along.  There is something primitive in that scent; it is registered in the innermost structures of the human brain.  It seems to fit the mood this part of town evokes on days all year round but especially on a day such as this.  It is at this most southern tip of the island of Manhattan that we meet the sea.  It is the scent of movement, of arrivals and departures, of the cyclicality of the tides; tides as another marker of time’s passage. There is a comfort, though, given by the ebb and flow of the endless tides. It is on the tides that both promise and hope ride; the undercurrents and eddies of morbid and morose concentration need not warrant concern. Today, here, we feel the raw sense of loss as acutely as we did 13 years ago today.  We recall who we lost and value who we still have.

At some point for most, our age and lifetime become a simple arithmetic equation requiring nothing more than the ability to add and subtract.  When we reach an age where we fully appreciate that we are closer to the end than we are to the beginning, is when the cruelty and sadness of time’s inexorable march takes hold.  It may only be during fleeting, idle moments as we go about that which constitutes our daily life that the equation makes itself known like a fly landing on your ear, an annoyance to be swatted away.  Sure, we can see it, the linear certitude of time in the mirror, on the faces and bodies of the children we held and nurtured as newborns now grown, gone on, and occupied with their own particulars.

Modern medical science has expanded the length and quality of our lives.  Perhaps, just for this simple equation, the age of 90 is the endpoint.  Certainly, in this case a person who celebrates their 50th or 55th birthday has indeed begun the downward trek towards the end.  And, as time passes while neighbors and coworkers, cousins and siblings begin to die, we become, even just in those moments, more cognizant of our mortality; the inevitability of our own demise.
We may begin to give serious thought to our pending death and “make arrangements”; write an advanced directive or living will.  We define what conditions we believe we would not want to live under.  We might make it known that we do not to be kept “alive” if our heartbeats and respirations are more a product of Con Ed than our own physiology.  Certainly, no one wants to exist in a chronic comatose state.  When neurological function can no longer be detected by monitors, whoever lived in that body is no longer present: brain death is actual death and there is no coming back once that chasm has been traversed.

Perhaps it is the simple arithmetic of so much of the unnatural death on Tuesday, September 11, 2001, that is the saddest.  The overwhelming majority of those innocents who lost their lives that day were young, vital, active, engaged and certainly not expected to die when they awoke that morning to catch a plane or go to work.  The thousands of smiling faces on makeshift posters that sprung up all over New York City, the sidewalk memorials that seemed to appear magically overnight, depicted young, vibrant people.  The faces of the Members of Service of the FDNY all so healthy and hearty looking; the NYPD and PAPD Officers all still on the job that fateful morning with hopes and dreams of retirement days still years off in the far distance.  Yes, what was taken from us that day was the best of us.  Our youth taken in what had been up until that gorgeous September morning the most unspeakable, unimaginable way, left those who remained to forever feel the weight of that loss just as the amputee still feels the pain in a limb long since removed.

Death is always painful, always difficult but when death strikes like an act of the Old Testament God in a fury of nature it delivers an additional shock.  Not that the deaths of this day 13 years ago were an act of God in any way, shape or form; they were an act of no one’s god, they were the acts of evil in its most pure, unvarnished, methodical delivery.  Yes, it was a shock, a shock like none of us had ever heard, seen, felt, smelled, and tried to comprehend in the moment.

The stark dichotomies of that morning in Lower Manhattan lent the atrocity an even crueler hellishness.  That amazingly clear, cloudless, azure New York City September sky suddenly marred by angry clouds of billowing, black smoke, orange flames raging from windows as helpless souls crowded at broken out windows seeking relief, redemption or just another gulp of air.  Likely all of them above those fires realized on some level that rescue was remote.  Conversely, the Firemen  who ran up those hundreds and hundreds of stairs ascending in the narrow stairwell passing the descending from above never gave up on the belief that rescue was imminent.  That was what they did and why they were there.  There were countless acts of sacrifice and humanity by people who survived inside and some of those who escaped that will never be known except by those particular people.  There were incalculable acts of heroism and balls; of grit, determination and the fight for life. Acts of selflessness and grace that only the Lord above bore witness to.  Yes, there was much given on that day and on an anniversary such as today it is easy to overlook all that was given to strangers by strangers, to coworkers from coworkers, from FDNY, PAPD and NYPD to the people and public they served.

Even though thoughts and memories of that day and the days after are carried deeply inside each of us in a personal and private way, protected from tampering, and resistant to fading, this one day, this anniversary is an occasion to gather and mourn collectively and celebrate the lives of those who we lost.

Sadly we remember them as they were that day, when they left home for work, the last time we saw them.  After 13 years having passed we have aged but they remain the age they were when they were taken from us.  There are empty photo albums and a dearth of family portraits and vacations pics.  It took some time for any semblance of normalcy to be returned to our lives.  And among those who serve, the Job has never been quite the same.  It still retains all its old luster but has been tempered in the flames and fires forged in our memories of mortality and circumstance.

The sun will set on this September 11th just as it has every year since that Tuesday the 11th of September in 2001 and with its setting, night will take over and this particular day of recognition, grieving, mourning and commemoration will conclude at midnight when the 11th bleeds into the 12th.  And so it goes, on and on.

Posted by Brooding Cynyc at 3:51 PM