THE HEIGHTS OF CONCERN 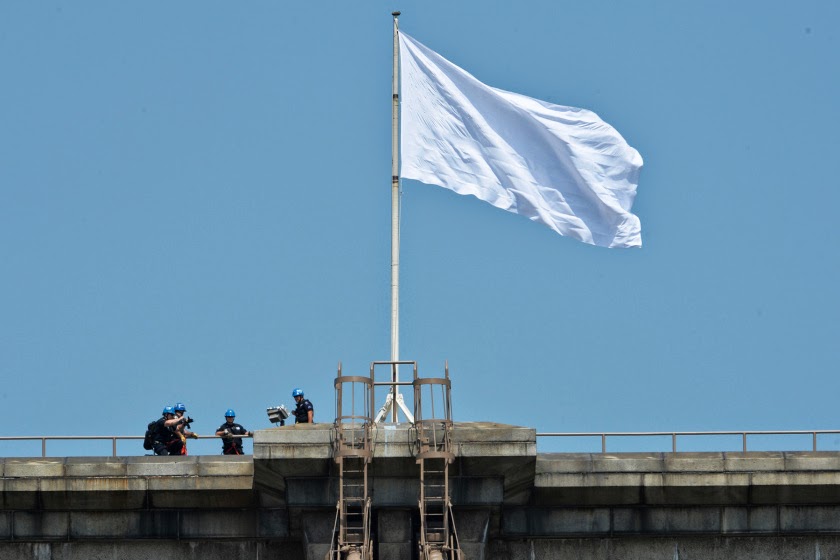 
THE BROOKLYN BRIDGE EARLIER TODAY AS THE INVESTIGATION


BEGINS.  WHO DID THIS AND WHY?

(Tuesday July 22, 2014, NY, NY)  New Yorkers awoke this morning to see two white flags flapping in the gentle breeze across the towers of the Brooklyn Bridge. As one of New York City’s most iconic structures the questions being asked today are more than alarming.  Considering other recent apparent security breaches at the George Washington Bridge and site of the Freedom Tower, these questions not only demand answers they require immediate action.  It is difficult to believe that anyone in NYC or any of the local and federal Law Enforcement Agencies (LEA) tasked with providing safety and security could have already become complacent.  There does seem to be an undeniable pattern of less than acceptable security at various important sites throughout the NYC Metro Area. This is a difficult fact to face but face it we must. Other locations across our country including other large cities, much of the vital infrastructure, electrical grids, pipelines and cyber threats remain increasingly vulnerable.

Earlier today the 9/11 Commission Chair Tom Kean and Vice Chair Lee Hamilton issued a blistering follow-up report 10 years after the July 22, 2004 release of the detailed summary of their original investigation titled: “Final Report Of The National Commission On Terrorist Attacks Upon The United States”.  Kean and Hamilton both express a measure of anger barely concealed by their obvious dismay and frustration.  They conclude here in July of 2014 that may of the most significant and glaringly exploitable of security flaws are still in evidence today.  They were especially harsh on the complete inability of the Congress to do anything worthwhile let alone actual oversight.  They bemoaned the lumbering, top heavy, inefficient, often ineffective Department of Homeland Security as a failed bureaucratic boondoggle ill-conceived and hastily constructed by the Bush Administration barely two months after September 11, 2001. The report released today titled "Today's Rising Terrorist Threat and the Danger to the United States: Reflections on the Tenth Anniversary of The 9/11 Commission Report” pulls the drapes off the windows of the federal intelligence apparatus and bluntly states just how vulnerable we remain ten years to the day after their first report.  They comment on the disjointed mutations of terrorist groups spawned from al Qeada, their proliferation around the world and the furtherance of the technological sophistication of some of these groups.  While we may have grown somewhat complacent in the last 10 years the terrorists have certainly not retreated from their efforts to attack our country in another dramatically lethal manner.

The caldron of geopolitical strife simmers across the globe and in some places today it has reached the boiling point.  Some of the usual suspects are involved as Israelis pound a beleaguered Palestinian people with disproportional measures, Sunnis and Shi’ites wage their age old war in the Iraq we fractured, France sends troops into former colonial Africa, and the Russian / Ukraine crisis hit a new low with the downing of a commercial Malaysian Air flight over Ukraine territory held by Russian-supported separatists last week.  The guerrilla fighting continues in Syria and the aftershocks of the “Arab Spring” reverberate angrily from Egypt to Libya. Cross border wars continue in North Africa while African nations such as Somalia and Yemen remain safe havens for the jihadis training camps from which inevitably a significant terrorist event will be launched against the United States or a proxy location that is of vital interest to our national security.  Yes, the daily discordant rhythm of the world never takes a break; the beats go on and on.

And as our tumultuous world spins on its axis we in America can never forget that we are a part of it; actually, we are the lone remaining “Super Power” and, as such we are endowed with a measure of respect and sometimes fear equal to and sometimes surpassed by the hatred of those who wish to do us harm.  We can afford to be military isolationists with our military presence in Afghanistan at a 12 year low and our complete exodus from the disaster Dick Cheney, George W. Bush and their neo-con puppet masters created out of deceit, deception and lies in Iraq; a torn and splintered failing state thanks to our ill-fated foray based on false pretenses for our “preemptive” invasion. But the world today is smaller than it has been at any time in the past.  We live in an interconnected network of economics, finance, commerce, trade and treaties that binds us globally in a weave of symbiotic and parasitic relationships that demand our constant attention.  As the world turns so do we, for better or worse isolationism is fraught with peril.

We should resist the knee-jerk reactions of Congressional buffoons such as John McCain, Lindsay Graham and all the other chicken hawks, to act as a “global police force”.  Where we need to focus our resources is not in flaming arenas around the world but rather right here at home.  We have an enormous problem with our own unsecured southern border, as floods of Central American immigrants and Lord knows who else try to sneak into the United States 24/7.

Amid all this global chaos it is difficult for our intelligence agencies to discern credible threats from terrorist’s bluster.  Contrary to the time prior to September 11, 2001, all of our redundant intelligence gathering and analyzing agencies are specifically tasked with the heavy responsibility of preventing another 9/11/01 scale attack.  Sadly it took the events of 9/11/01 to rattle the cages of the inept, hapless, lazy, pension-padding bureaucrats into cooperative action and to assume an offensive footing as we launched our “Global War on Terror”.  While that particular term has fallen out of fashion, the mission remains the same. Though they have not perpetrated another successful terrorist strike on American soil since September 11, 2001, let there be no doubt that there are those working just off the radar towards that end.

Large regions around the globe are shrouded in the fog of various wars and it is this fog that the terrorists exploit; they have some “cover” while they train and prepare for their next attack.  Below the obscuring blankets of fog the battle against global terror has lost some of the sense of urgency and vigilance it requires.  We in the West do not tell time as our adversaries do.  We view the world through a narrow slit behind us while they still seek vengeance from wrongs committed centuries ago.  This is no abstract, archaic concept; it is a painful reality as we witness two Peoples engaged in a bloody 60 years of bitter bloodshed fighting over land each of believe was ceded to them directly by God as told in the Bible.

We really need to reset our clocks and lock in for the long haul.  We must make a more concerted effort to acquire a more nuanced understanding of our enemies instead of labeling all, all of “them” in one deep nest of vipers.  Back to the Chinese days of antiquity we can read the words of their famous military leader Sun Tzu.  In his book “The Art of War” he makes many important points not the least of which is to understand, to “know” your enemy; his strengths and weaknesses, his tactics and strategies.  Only armed with knowledge can a military or other force rapidly dispatch an enemy.  Yes, our current struggle with terrorists will be long, protracted and complex.  We do not have one singular enemy such as we did for the length of the Cold War when the “Red Menace” of the USSR stood as our ever-present foe.  We have yet to adjust to the “nature” of our enemy; the asymmetry of the conflict and how in such a lopsided equation the terrorists have a distinct advantage.

This rash of recent security breaches powerfully illustrates what a small handful of determined individuals are capable of.  They have been able to scale the freedom Tower and parachute off in the still of the night just as a New Jersey high school student had similarly made that clandestine ascent just a few weeks before.  The weaknesses in the perimeter of the three Metropolitan Area airports have been exposed and two men from Inwood flew a radio controlled aircraft into the airspace above the GWB as an NYPD Aviation Unit helicopter hovered nearby.  Now several unknown individuals manage to scale the imposing towers of the Brooklyn Bridge and replace the stars and stripes with the white flags of surrender.  Imagine the damage they could have done, the havoc they would have wreaked had they planted a bomb or other explosive device instead of flags?

Individually each of these events is confounding perhaps perpetrated by harmless pranksters or dare devils.  Collectively they are deeply troubling and represent systemic failures in the security of New York City.  The turmoil around the world has given rise to the newest generation of terrorists and just like their al Qaeda forefathers they have their eyes set squarely on NYC.  There is no time to waste.