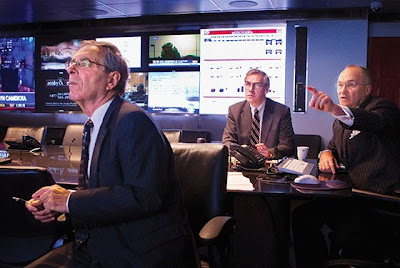 (Thursday December 19, 2013, Barclay St., NYC)  Just days after outgoing NYPD Commissioner Ray Kelly inked a lucrative contract with the Greater Talent Network to be a featured keynote speaker on the circuit two of his top Deputy Commissioners submitted their letters of resignation to the incoming NYPD Commish Bill Bratton.  While this is not an unusual rite of passage when a new administration is about to take control of the City, the two men leaving will be very difficult to replace for several reasons.  The vacancies their resignations will leave are in positions that had never before existed until Ray Kelly created them when he took command of the NYPD just three months after the terrorists’ attacks of September 11, 2001.  The question looms large now: how will Mayor – elect Bill de Blasio and Commissioner-in-waiting Bratton approach filling those vacancies and will they maintain the operational initiatives of two specialized Commands created by Commissioner Kelly. Mr. Bratton should also be on the lookout for more resignations in the near future.

Shortly after assuming command of the NYPD in January 2002, Ray Kelly realized that the events of 9-11-2001 required new and novel methods, strategies and tactics to address the real and present dangers posed to NYC in the form of the terrorist’s threat.  With the support of Mayor Bloomberg, Kelly revamped totally reinvented the Intelligence Division that had been, up to that time, concerned largely with gang activity, drug dealing and, in part “organized crime”.  Kelly’s vision became reality in the present incarnation of the Intelligence Division and the Counterterrorism Unit. He saw the glaring need to have his own intelligence gathering and Counterterrorism operations since it was painfully obvious that our federal government’s intelligence apparatus was not just dysfunctional but truly fatally flawed, negligent and not up to the task.

To direct his new Commands he wisely hired David Cohen a 35 year CIA veteran to head the Intelligence Division and named former federal prosecutor, Richard Daddario, to head up the Counterterrorism Unit.  The combined talents of these men and some of those personnel they brought with them to their new jobs literally wrote the first chapter in the new book of post 9-11-01 urban policing and police-based intelligence and Counterterrorism policies and practices.  Suffice to say, despite their often controversial methods, both of these Commands have been successful in collecting, analyzing and disseminating “real time” actionable intelligence and have interrupted at least 13 terrorist plots.  Much of the controversy surrounding the operations of the Intel and Counterterrorism squads have been leveled by Muslims and Islamic leaders living in New York City and in Jersey City just across the Hudson River from Lower Manhattan.  The Muslim community felt they were being unfairly targeted and “racially profiled” because the 19 men believed to have perpetrated the 9-11-01 attacks were Muslim.

Contrary to the complaints of New York City’s Muslims, NYPD went through great efforts to assure their operations were within the legal boundaries of all applicable law.  Deputy Commissioner for Intelligence Cohen hired another long time CIA veteran, Larry Sanchez, a former colleague that Cohen valued, respected and trusted.  Sanchez was officially “on loan” from the CIA as per then CIA Director George Tenet.  Sanchez remained an active CIA employee with access to all the intelligence and resources that came with such employment.  What these men and their personnel achieved is now considered as the “Gold Standard”, the template other “big city” Police Departments are trying hard to emulate.

CHANGING OF THE GUARD

For every Member of Service (MOS) in the NYPD that will miss Ray Kelly there is an opposing MOS that is happy to see him go. The ratio between these camps is surely not one to one but it is difficult to determine what the majority opinion is. As in any highly structured hierarchical organization of this size, the 40,000 or so MOS have diverse and often conflicting opinions not only about who sits in the spacious 14th floor office in One Police Plaza (1PP) but also who the others are occupying the upper echelon of the Department, Commands, Divisions, Units as well as each and every Precinct.  Cops, generally speaking, loathe politics, politicians and any and every public action taken by the highest ranking Brass is immediately scrutinized in an effort to discern what the “real” message is coming out of 1PP. When the rank and file believes and actually feels that the Big Brass has their backs then the entire Department functions more efficiently and effectively.  It is difficult to understate the importance of “morale” among the MOS.  When the rank and file begins to feel under siege by their own Department, the entire organization suffers as does the public they are tasked with protecting and serving.

No one can deny Bill Bratton’s right to exercise his executive prerogative; naturally as any CEO in any organization, he needs to surround himself with like-minded, trusted advisers and counselors; people that can play “devil’s advocate” without fear of reprisal, speak truth to power even when doing so is difficult.  That is the only way it should be and it is even of more vital significance when we are discussing the largest, most professional law enforcement agency in the country in the largest, most diverse and densely populated City in America.  Naturally there were some MOS who reacted poorly, to say the least, when Bratton was named the next Commissioner by Bill de Blasio.  Bratton is no stranger to this City or the NYPD but, for all his history here he will forever be an ‘outsider” and, not just any outsider; Bratton is from Boston.  NYPD is a legacy agency, deeply rooted in its own history and traditions; they like to see one of their own rise up through the ranks.  But, the Mayor-elect has made his decision and that is that.

There are those who view this particular discussion as inappropriately “political”.  We are of a contrary view.  These issues affect not just all MOS of NYPD but everyone who lives here, works here, travels through here and visits here.  How well the “Vital Services” of NYC (FDNY, the Department of Sanitation, the Metropolitan Transit Authority, and the Office of Emergency Management) just to name the most visible, function is as important to the City as is the heart to the human body.  Sound and strong leadership is essential to each Department and Agency to keep our City running smoothly.

In the post 9-11 City there was much to change and much has been changed.  It is common knowledge that we, New York City, remain the most “target rich environment” in the eyes of terrorists around the world.  Just because we have not been successfully attacked since September 2001 certainly is no indication or proof that we are not still in the crosshairs of terrorists of every ilk from every corner of the earth.  The public will likely never learn precisely how effective Kelly, Cohen and Daddario have been individually in their respective positions as well as a tripartite collective working with all gears meshing quietly.

It would be naïve for anyone to think that we are not about to enter into a more vulnerable time.  The changing of the guard, the transition from the stability of 12 years of Bloomberg and Kelly into the new days of a novice Administration is no doubt being followed by some terrorist organization or cell or, perhaps, just a few zealots somewhere with designs on making their bloody mark on our City.  As we have all learned so painfully, so awfully vividly, we have been and remain a high value target. We can only hope that the new team about to assume control in a few weeks has the same priorities regarding our safety and security as did the outgoing Administration.

Let all of us hope that the torches that will pass from the Bloomberg Era to the de Blasio Administration are deftly handled and that real continuity and focus is upheld by all those now entrusted to govern and protect our City.

Posted by Brooding Cynyc at 3:00 PM