UNDER COVER, UNDER PRESSURE


THE PERILS OF LIVING TWO LIVES 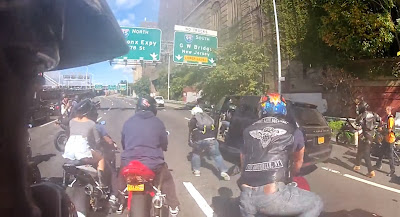 
(Wednesday October 9, 2013, One Police Plaza, NYC)  The video images of a marauding band of motorcyclists literally seizing control of the northbound lanes of the Henry Hudson parkway were disturbing enough.  These bikers rode as an unruly mob on two wheelers, four wheelers, dirt bikes and ATV without regard for speed, lane demarcations or public safety.  They were just a rolling mob breaking numerous traffic laws and jeopardizing every other vehicle they encountered.  Video from on biker’s helmet cam shows one of the other bikers coming to a stop directly in front of a range Rover which they had surrounded several miles back.  As some of the bikers dismounted and approached the SUV where 33 year old Alexian Lein was driving with his wife and two year daughter aboard, they began pounding on the SUV’s windows and managed to drag Mr. Lein out of the vehicle.  He quickly was able to pull away before they had extracted him completely.  He saw his only way out was to move ahead.  After all, he and his family were trapped by a mob bent on menace and violence.  To make his escape he drove over the biker who had caused him to come to a halt.  Upwards of 47 other bikers then began pursuit of Mr. Lein and caught up with him in snarled traffic on 178th Street in Washington Heights.  It was there that they did pull him from his vehicle after smashing the windows in with their helmets.  Fortunately Mr. Lein, his wife and his daughter were not seriously injured.  The biker Mr. Lein drove over, Edwin Mieses Jr., suffered a broken spine, fractured ribs, a punctured lung and a torn aortic valve according to reports.  As of this time 4 arrests have been made in this disturbing case of semi-organized mayhem, intimidation, and wanton aggression.

The focus in the press has been diverted from the attack and the alleged perpetrators to the now confirmed presence of an off-duty undercover NYPD Detective. The Detective, Wojciech Braszczok, was arrested at his home last night for his alleged participation in the events on Sunday September 29.  Based on video evidence from various sources it is not readily apparent what role Detective Braszczok played in the actual physical assault of Mr. Lein.  Braszczok did not report to his superiors that he’d been a rider among that unruly mob until last Wednesday, three days after the fact.  There are reports simmering in the background that there may have been other members of NYPD participating in the annual bikers rally and ride.  While many questions remain unanswered and the Internal Affairs Division (IAD) of the NYPD is currently conducting an investigation into the role Braszczok may or may not have played as well as the possibility that other members (MOS) of the NYPD were present or involved.

UNDER COVER: ATOP A TIGHTROPE

To the uninitiated being “undercover” is very much misunderstood.  In some respect many Police Officers and other Law Enforcement Officers (LEO) have many misconceptions of what it is like to actually live a life undercover.  It is nothing like working “in plain clothes” as in anti-crime and street crime details or other assignments that require regularly uniformed Officers to more easily blend into a crowd.  An undercover assignment requires a host of abilities not the least of which are courage, intelligence, street smarts, quick thinking, and the ability to assimilate and process situational awareness and data rapidly.  Those among the Law Enforcement Community (LEC) who are or have worked undercover are a unique breed; a high level of commitment, sacrifice and mission are requisites for such an assignment and, the fact of the matter is, not everyone who seeks such an assignment is qualified or deemed suitable for it.  The undercover Officer who is not so possessed of these traits and abilities will not be undercover very long.  The threat of exposure often means a death warrant for the “made” undercover.  The price to pay is steep indeed and while every LEO faces the possibility of death every time they go to work, the undercover Officer’s risk is exponentially higher.  Despite this stark fact there are currently dozens of men and women of the NYPD involved in “deep cover” operation throughout the five Boroughs.  They often work with minimal backup or support; if anything, such luxuries are reserved for the time when they have taken months or years to build a case and are about ready to make arrests.  Living under such omnipresent tension breeds a healthy amount of paranoia but also can take a heavy toll on the Officer’s personal and family life.  Yet, like every other high risk Unit in the NYPD there is never a lack of MOS willing to step up and take on the unique challenges of a specialized Unit be it Emergency Services (ESU), Bomb Squad, Counterterrorism, Intelligence, or Narcotics.

Regularly we’ll read in the New York Times and Daily News about a “sting” operation that netted a large cache of drugs, guns, or interdicted the plans of people bent on perpetrating terrorist activities in our City.  The past decade has seen a number of Officers working stings murdered in cold blood.   The men and women who voluntarily take on such assignments are among the finest of The Finest.

RULES OF ENGAGEMENT VERSUS SELF ENDANGERMENT

Some of the rules, the standard operating procedures as defined in the NYPD Patrol Guide do not apply universally to undercover Officers. Situational circumstances, the scale and scope of the investigation and the role that each member of an undercover team or unit play must be and are taken into consideration. No, they are not above and beyond the law and the accepted practices of their uniformed colleagues but often they find themselves enmeshed in scenarios where they must walk up to but not over that fine, delicate line of criminality.  For the sake of argument let’s, for the time being, extend the benefit of the doubt to Detective Braszczok.  Perhaps he felt compelled to maintain his cover and, in order to not rouse suspicion; he struck the Mr. Lein’s SUV and then sped away on his motorcycle.  There are no allegations that he actually struck any of the occupants of the vehicle; his “crime” if any do not include assault.  This is not to make excuses for him or to belittle the fact that he took three days to report his involvement in this incident to his superiors.

At this time we are not privy to some of the most fundamental facts related to this case.  Even though Detective Braszczok was “off duty” is it not reasonable to consider that his participation in this biker rally was part and parcel of a wider investigation, that his presence in this unruly mob lent him an additional layer of credibility with the other bikers?   Can we imagine the peril he may have put himself and his family in had he waded into this foray and identified himself as a Police Officer?  The rush to judgment in this case is surprising and not only based on a scant amount of information at this but also uncharacteristic of the solidarity MOs of NYPD historically provide each other. Perhaps because most Police Officers are unfamiliar with the hazards and stress of working undercover it is easy for them to intemperate Detective Braszczok’s actions through the prism of the NYPD Police Academy training, The Patrol Guide and their own experiences.

As one retired NYPD Detective recently wrote (prior to the event under discussion here), “As an undercover NYPD Detective I was tasked with many responsibilities. I didn’t go to work out of normal law enforcement agencies or buildings. I didn’t carry police ID and never conducted normal police work. I never arrested anyone. I spent my days and nights in the streets, buying mainly narcotics and firearms.


I infiltrated organizations and gathered intelligence as well as conducting transactions of all types. I worked cold case homicides. Most cases were long term and usually involved wiretaps and federal agencies.


My safety depended on how well I assimilated the role of a criminal. It’s a thin line between assimilating and becoming one. It’s nothing like you have seen in any movie or TV show. That lifestyle eats you up from the inside. It’s not easy but easily addicting. Others have been murdered doing what I did. It was a reality you lived with every day, every minute of an operation. I paid the price, sometimes with blood and pain. Even my family paid, many times without even knowing why. (http://www.reddit.com/r/IAmA/comments/1mslml/iama_retired_undercover_nypd_detective_ive_spent/)

Perhaps the only role the independent freelance writer/blogger can play in controversial cases such as this is that of the Devil’s Advocate, a counterpoint to what is reported as truth in the mainstream media.  Certainly there are many in our City who gleefully stomps on the men and women of the NYPD at every opportunity, they never pass up a chance to grandstand, lambast, and rabble rouse.  Perhaps we’ve not seen this case rise to that crest yet but, before all is said and done, before all the truths are assembled, it probably will.

Who knows?  Maybe Detective Braszczok will be exposed as a dirty Cop, as a dishonest Cop involved in criminal conduct having violated not only specific law but his oath of Office.  Yes, that may be the case.  However, on a cautionary note we ought not to be so eager to write the next chapter in this already ugly story, we should not render judgment without as many facts at our disposal as become available.  If it becomes clear that Braszczok walked to close to the edge, played with fire in his undercover life he will certainly not be the first UC to do so.  But until such time let us afford him the opportunity to be presumed innocent in the allegations that are enveloping him and his family today.  It might be too much of a stretch for some but it is at least worth making an effort to stretch.