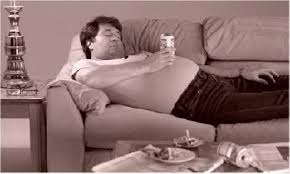 The new picture of health and happiness in America

(Monday April 1, 2013, NIH, Bethesda, Maryland)  In what will undoubtedly ignite a contentious debate among researchers, medical scientists, physicians and others in the health care field, the results of a recently concluded long-term study will be released later this week.  The results of the study conducted over the last 43 months by a diverse team of medical researchers and experts in fields ranging from physiology, cardiology, pulmonary medicine and kinesiology to nutrition, internal medicine and others has reportedly revealed that lazy people have a better quality of life and actually tend to live longer than their more active counterparts.  These results appear to contradict most of what has been the established medical dogma of the past 40 years.  An abstract of the complete report that will appear later this week in the renowned Journal of Aging, Living, and Dying (JALAD) was leaked to selected media outlets over this past weekend.

Essentially the results of this long-term study have indicated a very strong correlation between modest to very low activity levels and the length of one’s life.  For most of the past 50 years it has been common knowledge and accepted as medical science gospel that exercise was a key factor to living a “healthier, longer life.”  Dr. Hugh R. Stout, the lead author of the study and the Research Director of the Center for Idiopathic Epidemiology where the research was conducted, here on the sprawling campus of The National Institutes of Health, commented, “I know, I know.  We are anticipating a huge amount of blow back from the medical community and the dietary-exercise-weight loss industrial complex.  Certainly, our research debunks virtually everything they have been preaching for a good many years.”  While Dr. Stout admits his team’s results are controversial, he also is confident that “the American public will welcome the results of our work and embrace our findings.  Just letting people know it is perfectly acceptable if not actually favorable to be lazy, will add years to countless lives.”

The researchers are confident that the rigorous methodology employed throughout the almost four years of active research where they studied, in depth,  the habits and health of over 47,000 male and female participants across all  demographic groups in 5 states, will help curb the initial wave of criticism they are expecting from the mainstream medical community, Weight Watchers, Jenny Craig, and gyms, spas, and sportswear retailers to name just a few of those with “a vested interest in the status quo” added Dr. Stout.

Beginning in the early 1970’s and the “jogging craze”, the concept of personal health and fitness has blossomed into a multibillion dollar a year industry and has also been among the primary tenets of modern medicine.  From the days of the fitness industry’s infancy the stress on aerobic exercise several times a week as a means to control everything from resting heart rate, blood pressure, body composition and weight has become part of our society.  Many companies today offer their employees modest discounts on their health insurance premiums if they participate in “wellness” programs either on-site at their work place or somewhere else.  Also, cigarette smoking has decreased by over 75% since it was first strongly linked to various malignant diseases, emphysema, Chronic Obstructive Pulmonary Disease (COPD), hypertension and halitosis, which has added dramatically to the overall health of the American public.

But what has been miscalculated and perhaps even under evaluated is the quality of a person’s life as measured by such devices as the Life Quality Index (LQI) and other metrics that are designed to measure an individual’s overall contentment, stress level, socialization, and other components more subjectively assessed said Dr. Harrari al-Bezbhahl who spearheaded the segment of the study that analyzed a person’s happiness. Dr. al-Bezbhahl continued, “The laziest people we studied were beyond doubt the most content.  It seems that those individuals who are very concerned about their health and weight, their appearance and attractiveness live with a level of stress that is very counterproductive to their actual health.  Since lazy people tend not to worry about such concerns, they live with far, far less stress and that translates into a better quality of life and a longer life, too.  The detrimental effects of stress on the human body are well documented.  Remove sources of stress and people become healthier and happier.  It just that simple.”

Obviously even these leaked aspects of the study are already stirring controversy among doctors who have seen the abstract.  Dr. Carol M. Buetol a Professor of Wellness and Preventative Medicine at Johns Hopkins Medical Center in Baltimore commented, “This study cannot be taken seriously…I mean, really??  Everything I have read so far about this research tells me the results are beyond suspect.  I am curious to read the full report and examine closely the methodology they used.  All I can say at this point is that it seems like a big load of horse shit to me.”  Dale Kyle Furnstead, the inventor of trail mix, was reached at his mountain retreat in Golden Colorado earlier today and noted, “What a person eats does matter.  How much a person exercises does matter.  A person has a great deal of control over their health and this NIH study seems to me to be kinda nutty.  But, since I have made my living being kinda nutty in my own way, I suppose I’ll just have to wait until I get the next issue of JALAD.”

Segments of the economy that stand to benefit tremendously from these research results include the fast food retailers, snack and junk food producers, bakeries, diners, sandwich shops, ice cream parlors, beer and alcohol marketers and the grocers of America.  Kevin O’Beese, President of the Council of Deep Fried Food Vendors, a Washington DC based lobbying and advocacy group, was noticeably pleased by the results. In a gracious mood in his well-appointed office on K-Street, between bites of Beef Jerky and onion rings commented, “It’s about time science has caught up with what most people have known all along.  All this fitness and working out stuff has been just a big crock of shit.  It has been a concerted, deliberate effort by the Left wing Liberals in the Democrat Party to make people feel guilty if they smoke, don’t work out, are a bit chubby and don’t really want to spend any more time sweating than they have to.  It has been fueled by the Hollywood elites and the clothing, cosmetics and health food industries all of which have a fascist-socialist-communist influence.  Hell, I’m lazy and damned proud of it.  I’m what America is really all about.”

Other segments of the economy have greeted the news of this study’s results impending publication quite differently than those such as Mr. O’Beese.  Rex Burrlap who owns and operates a chain of high-end gyms and fitness centers from Florida to Maine was visibly angry when interviewed.  He commented, “This is crazy, right?  Is this some sort of joke?  This research actually proves that lazy people are happier and healthier than folks like those who work out in my gyms and fitness centers?  Impossible.  I cannot believe it…I won’t believe it.  I mean, personally, if I don’t work out vigorously for at least 3 hours a day, every day, I feel like a slug.  I am happy.  I watch what I eat and am very content with my life.  Just ask my therapist, my psychiatrist or my yoga guru.  They’ll tell you.”

After a generation of being told what we must do and not do to live healthy and happy lives, it seems Americans are ready for a change.  A majority of the study participants in the age groups of 15-23 years old, 24-34 years old and the 35 and above age group said they were “tired” of feeling as if they had to “do something” to change the way they look simply because “society” was sending them signals particularly about their weight and physical appearance.  The research clearly illustrated that those participants who admitted to “sitting in a chair watching a football game” made them feel better about themselves (71%) were represented overwhelmingly when compared to only 3.7% of the participants who claimed “running, jogging, or walking on a tread mill” gave them comparable good feelings.

In a series of double blind experiments where the a selected number of study participants were housed in a closed environment that was under closed circuit TV coverage 24/7, the residents chose to eat food items such as cheese dogs, spam stew, chili, French fries, burgers, pizza, banana splits, pie a la mode, salami, bratwurst, assorted candies, cupcakes, fondue, and anything that was deep fried, twice baked, stuffed, or smothered in Velveeta instead of lettuce, baby carrots, quiche, granola, white rice, steamed beets, kale, or Kiwis.  As many times as this experiment was conducted the results never varied beyond the statistical margin of error which was miniscule. 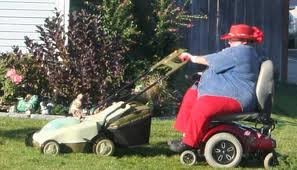 Arnold Zyzmanski a Professor of Modern American Society and Culture at Stanford University found the results of the NIH study “very interesting”.  He commented, “laziness is as American as the recliner, as much a part of our culture as the automobile, as much a part of our lives as convenience stores.  I hope people take this research seriously because I believe once society gives us all the approval to be lazy, we will have much less violence and tension among us and we will just be a happier country.”

Zyzmanski added that Bill Gates, one of the greatest intellects of his generation and one of the people most responsible for the technological culture we enjoy today had once famously said, “Whenever I have a difficult task I always assign it to a lazy person.  I know he will find the easiest way to do it”.

Posted by Brooding Cynyc at 9:00 AM

Another very funny piece, BC. This reads like a legitimate article but I realized half way into it that it was an April Fool's Day satire. Keep them coming Brooding.