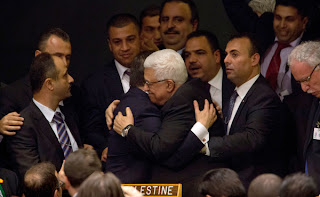 (Friday November 30, 2012, New York, NY)  Exactly 65 years after the day in 1947 that the United Nations voted for the “Partition Plan”, formally known as United Nations General Assembly Resolution 181: "Plan of Partition with Economic Union" which was intended to release the region known as “The Holy Land” or “Palestine” from the British Mandate that had overseen (effectively governed) the region since the League of Nations adopted the Balfour Declaration that was implemented in 1923, the UN General Assembly (UNGA) voted to officially recognize the State of Palestine. While many regard this as nothing more than a “meaningless, symbolic gesture”, it has a far more profound significance.

Since the time of the initial British Mandate in 1917, neither the Jewish or Palestinian people were pleased with the arrangement and, as the community of sovereign nations has witnessed time and time again, the concept of a “Two State Solution”, one Palestinian, the other Israeli, has remained just that - a concept, a painfully elusive concept that has taken an unknown number of lives, kept the entire Middle East region captive to the perpetual Arab/Israeli conflict in Israel; fomented violence, terrorism, and created a seemingly intractable scenario with Israel keeping the Palestinians under iron-fisted oppression and, arguably “occupation” for generations.  Whether yesterday’s historic vote is just a symbolic gesture or a real, concrete “first step” towards an ultimate mutually agreeable solution remains to be seen.

That this vote occurred so soon after the latest military engagement between the Israeli Defense Forces (IDF) and the militant faction, Hamas, who launched long range missiles from their base in The Gaza Strip into Israeli cities, is no coincidence.  That it transpired on the annually observed International Day of Solidarity with the Palestinian People is just that – a coincidence.  It appears that this most recent flare up and violent exchange between IDF and Hamas was the proverbial “tipping point” that prompted the UNGA action.

Before the existence of any laws made by man there existed a set of natural phenomenon, as immutable and pure as life itself.  It took thousands of years of observation, pondering, calculating and intense study and experimentation until some of these phenomenon could be codified in a body of laws.  The Laws of Nature contain within them the Laws of Physics and Thermodynamics.

Some of the basic Laws of Physics are familiar.  Those simple statements we may have encountered in a high school science class that inform govern the mechanics and machinations of the known universe from the galactic scale to the sub atomic realm.  Sir Isaac Newton discovered the mathematical symmetry that is requisite of all physical laws  such as, “An object that is at rest will stay at rest unless an unbalanced force acts upon it” and “An object that is in motion will not change its velocity unless an unbalanced force acts upon it.”  Since the days of Newton a body of laws have been amassed that explain physical phenomenon such as motion, speed, velocity, entropy, energy and a host of related natural activity.

Man began to create, implement and enforce laws of his own construct since the dawn of civilized societies.  There were laws of religion that varied from tribe to tribe and lead to the development of organized religions.  Laws governing society, trade, banking, civil governance and criminality arose as man flourished.  The old Latin document, The Magna Carta, written in 1215, remains the bedrock of civil and criminal law in many western nations to this day.

Laws begot more laws; as societies became increasingly sophisticated and complex still more laws were more written and implemented.  While the Laws of Nature had always existed awaiting discovery, other laws were crafted out of ambiguous and often dubious whims of those in authority.  Some of the recently defined “laws” of Mans creation are informal but ring so true in our lives that we have elevated them into certainty.  Murphy’s Law is an example as is the Law of Unintended Consequences.  It appears whether one accepts that as truisms, one of the Laws of Unintended Consequences was proven in the cavernous UNGA chamber yesterday and Israel was its victim.

In a disturbingly cyclical pattern Israel has found itself unleashing the full might and fury of those it occupies.  A few crude missiles fired into Israel from Lebanon, The West Bank or Gaza, and hundreds of retaliatory airstrikes from the mighty Israeli Air Force reduce block after block of Palestinian homes and shops to smoldering rubble usually, if not always, claiming the lives of unknown innocent lives of Palestinian men, women, children the elderly and infirm.  The brutal disproportionality of the “Israeli response” is so obvious and grossly inconsistent with International Law that it appears, finally, the world community has mustered the resolve to make a loud and clear statement, “Enough.”  For Israel the Law of Unintended Consequences has boomeranged home.

Israel is unaccustomed to such a strong rebuke.  They have operated with callous, malicious impunity outside the confines of International Law as the ungrateful beneficiary of the largess, sympathy and inexplicably unshakable allegiance of the United States.  No matter the cause or atrocity, despite all the subsequent UN resolutions passed since Resolution 181, Israel has existed comfortably behind the protection and influence of the United States.    And as every country, politician , world leader, head of state, observer, journalist or intellectual has painfully learned, to cross Israel, to in any way, shape or form criticize the Israeli governments and practices is to not only invite strong often ugly retaliation but also to automatically be branded as “Anti-Semitic.”  The unreasonable, vociferous almost pathological reaction by each and every Israeli Administration is finally becoming apparent for its transparency, disingenuousness, and moral inconsistency.

There is a glaring morbid irony inherent in the Israeli policies and practices towards the Palestinians for the last 65 years.  One could reasonably think that a people that have themselves endured atrocities and genocide on a massive scale would be the most sensitive to the plight of other beleaguered people.  There is no denying that the Jewish people did face virtual extinction during the reign of the Nazi regime from 1939 until the end of World War II in Europe in 1945.  The “Holocaust” remains one of the darkest chapters of pure evil in the annals of history.  Having been the innocent victims of an almost demonically inspired “Final Solution” to eradicate them from the lands within Hitler’s maniacal reach, does not give them license now to occupy, oppress, and hold hostage an equally beleaguered People.  To constantly invoke their tragic history as justification for their aggressive apartheid policies not only diminishes their own painful past but has become irrelevant to the issues that demand resolutions today.  The Jewish state and the Zionist Movement have done more to exploit their own past than any other religion and people.

Israel has used the brutal episodes in Jewish history as the rationale, the actual reason for their behavior.  Yes, other Middle East countries have, at one time or another, gone to war with Israel, many deny her right to exist to this day.  But, as the years have melded into decades and generations of Palestinians have grown up in deplorable conditions, Israel has become a formidable military power with a nuclear capability which they adamantly refuse to admit to.  They are no longer in any danger of “extinction”; never again will a country of coalition of hostile neighbors decide to square off against the highly trained, superiorly armed IDF.  So pulling out the tattered and torn trump card of the Holocaust is a bogus ploy that most Jews should find offensive if not insulting and demeaning to the relatives they lost to the horrors of notorious places such as Dachau, Auschwitz-Birkenau, Buchenwald, and all the other hideous facilities built and operated by the Nazi’s at which they could achieve their diabolical aim.

The world will watch and wait anxiously to see what happens next in that hotly contested, ancient land so infused with history, religions, and far too much spilled blood.  Early indications are that Israel will continue to be belligerently petulant and, as a result of yesterday’s UNGA vote quickly approved the expansion of “settlements” in the West Bank.  Not only is this far removed from any sign of what the community of nations proclaimed loudly and clearly, but also demonstrates their recalcitrance towards conciliation and desire to work in furtherance of their oft stated but never achieved goal of a “Two State Solution.”

But, the world is watching perhaps as never before.  Israel is poised at a junction although she may fail to realize this new harsh fact.  She has choices to make that transcend her domestic politics, shine a new high wattage light on her actions, and place the onus squarely on the shoulders of her leaders.

Perhaps the world will be relieved and pleasantly surprised when Israel matures under the scrutiny of the wider world and takes earnest, tangible efforts in the rocky direction of the long sought Two State Solution.  The world can only watch and pray.  The Palestinians can celebrate again tonight buoyed by the fact that finally the United Nations has heard their anguished cries.  But, time will tell.