THERE IS REAL POWER IN “WE”

AS THE WORLD SHRINKS, LESS “THEM” MORE “US” 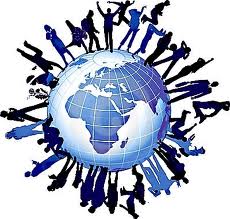 WE ARE A GLOBAL COMMUNITY 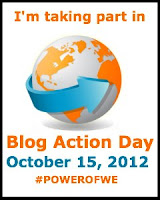 (Monday October 15, 2012 – Blog Action Day)  Our world has shrunk dramatically.  In less than 20 years we have truly evolved, largely for the better, into a global community more intricately linked than anyone could have anticipated not that long ago.  Technology has given us all access to an amount of information, knowledge, ideas, and data of every conceivable kind fostering exchanges among us - no matter how far flung we might be from each other geographically - to begin to close racial and ethnic divides, to bridge religious misunderstanding, share perspectives and perceptions, opinions and ambitions at a volume and frequency never fully anticipated when the World Wide Web emerged as a novel new media in the early 1990’s.  The “Information Super Highway” has been the cyber conduit creating networks and communities while allowing events occurring in remote locations on our planet to be shared with the wider world in “real time”.

Yes, globalization has its detractors and has had some unintended consequences but overall has, at least its social networks, information and news sharing component, proven tremendously beneficial.  Those of us of a certain age, born and raised in the pre- information age world, marvel at the technology and its capabilities and implications.  We have seen over and over the value of an individual with a phone camera and an Internet connection capturing for all the world to see a heinous crime or injustice. Borders, boundaries have eroded; despots, and demagogues have fallen. There is no way to understatedly express the profound impact of the technology that has significantly  increased our proximity to each other.

Everyone participating in this year’s Blog Action Day is a testament to how our world has changed and will continue to change ever more rapidly.  Once we were lone voices; perhaps concerned citizens, politically active, advocates for certain causes who may have written a letter to the editor of the local newspaper and had to be content with that.  Now we can write and share our causes and advocacy, find like-minded individuals and communities and we are no longer simply lone voices lost in the winds of current events and held captive by the corporate owned “main stream media” who have no vested interest in reporting the truth, allowing alternative opinions to be heard, and are nothing more than tools of governments and moneyed interests who became their masters.

Let’s concede the fact that there exists a dark, malicious, and inherently dangerous side to our interconnectivity.  For the purpose of this discussion we'll look only at the upside, taking stock of the infinite benefits our shrinking world allows us, for the first time in human history, to exploit as a means to wield real power as “we”.  The examples of the good social media has done, the light it has cast into dimly lit shadows, the fresh air of new ideas that has blown through windows now open, that had long been closed, grow in significance virtually every 24 hours. Secrets are harder to keep; oppression more difficult to hide, crimes against humanity less likely to be concealed. Famine and deadly outbreaks of disease become news in the never ending always ravenously hungry 24 hour a day news cycle. Satellite phones allow lone physicians in the farther recesses of the Congo and Amazon basins to communicate with colleagues in France, Spain, Paraguay, the United States collaborating from afar for a common purpose.  Time has been reduced by technology, this reduction in time has saved lives, brought much needed aid to refugees and those in desperate need with stunning rapidity.

From the “Arab Spring” of 2011 that toppled repressive regimes to exposing the atrocities in the American run prison, Abu Ghraib, in 2003, “we” are slowly but surely changing our world, demanding transparency from our governments, able to mobilize like-minded people where ever they may be to draw attention to a cause be it disease or disaster, hunger or human rights violations, no issue or event need necessarily transpire in the vacuum of isolation any longer.

A CASE IN POINT : MALALA YOUSAFZAI 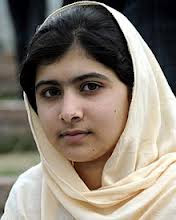 Just last week the world learned of a horror that may have never been known outside the harsh, rugged confines of the Swat Valley in Pakistan.   On Tuesday October 9, masked Taliban gunmen attempted to assassinate a 14 year old school girl simply because she dared to dream, to want an education and to speak out against the vicious militants who cannot abide by such ambitions from a girl.  Two of her classmates were also injured in the attack on the van serving as a school bus.

At the age of 11, Malala Yousafzai took on the Taliban by giving voice to her dreams. As turbaned fighters swept through her town in northwestern Pakistan in 2009, the tiny schoolgirl spoke out about her passion for education — she wanted to become a doctor, she said — and became a symbol of defiance against Taliban subjugation. [1]   While all three survived, but late on Tuesday doctors said that Ms. Yousafzai was in critical condition at a hospital in Peshawar, with a bullet possibly lodged close to her brain.[1]

A Taliban spokesman, Ehsanullah Ehsan, confirmed by phone that Ms. Yousafzai had been the target, calling her crusade for education rights an “obscenity.”

“She has become a symbol of Western culture in the area; she was openly propagating it,” Mr. Ehsan said, adding that if she survived, the militants would certainly try to kill her again. “Let this be a lesson.”[2]

As of earlier today the courageous young women was transported to the United Kingdom for specialized care via a specially equipped air ambulance provided by the United Arab Emirates.  Ms. Yousafzai has demonstrated strength of character and conviction, as well as a depth and breadth of courage that belies her tender age. There have been spontaneous public demonstrations across Pakistan where the people of Pakistan have voiced their outrage at this atrocity.  Yes, it occurred far away from where “we” sit but “we” knew about it within hours.  We all should pray,  offer our intentions, thoughts or express our support as we each chose to for this brave member of our global community clinging to life.

The statistics feature of Blogger allows us to  not only track our audience but also see how they find our Blog, what links and search engines bring them to us, and where they are located.  We have readers in the United States and our neighbor to the north, Canada as well as in Russia, Turkey, England, China, Indonesia, The Netherlands, Belgium, Estonia, and Australia, just to mention a few in no particular order.  If there is not tremendous untapped energy and power from this interconnectivity than we all might be missing the point.

The United States exports elements (good and bad) of our culture and, in return, the free flow of ideas and thoughts, the establishment of cyber relationships becomes a self-perpetuating series of intertwined feedback loops.  We have come a long way yet we need to travel so much further.  All we have are each other.  We are not governments or regimes.  We do not occupy seats at the United Nations or command militaries or militias. Nor should we want to.  But we each have a voice and together, our voices uniting for various causes, from diverse and disparate places, making connections never before possible, we can enact change.  We can be heard.  We must be heard.  We will be heard.

The Brooding Cynyx thank the organizers of BLOG ACTION DAY 2012 and all who have taken the time to participate.  We are immensely proud and feel privileged to have been a part, albeit a small, small part, in this movement far larger than anyone one of US.  It is all about the POWER OF WE!

TAGS: BLOG ACTION DAY 2012, THE POWER OF WE, OUR SHRINKING WORLD, THE GLOBAL COMMUNITY, MORE “US” LESS “THEM”, SHARING IDEAS, OPINIONS AND KNOWLEDGE, TECHNOLOGY, SOCIAL MEDIA