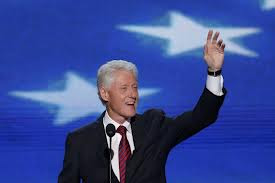 (Sept 6, 2012, Charlotte, NC) It was Bill Clinton at his oratorical best.  Perhaps the best political speaker this country has seen in a generation, in his trademark way, accomplished more to further his Party’s cause in just over 45 minutes than the Obama campaign has in months.  He did what only he could do; he laid out in simple understandable terms the details of some of the most pressing issues weighing on voters’ minds.  He did it with grace, humor, and authority; the authority he commands as the last successful, accomplished and widely recognized as the most effective President in decades.

While out of necessity, shame, embarrassment and political desperation the GOP ran from their last standard bearer, the disastrously inept former President George W. Bush, conversely, the Democratic Party embraced and celebrated their favorite son here tonight.  Bill Clinton conducted a veritable clinic in wide scale retail politics before a national viewing audience estimated to be upwards of 33 million citizens.

Point by point he masterfully dissembled the incoherent tripe spewed by Romney/Ryan while assembling a cogent, logical reasonable case for the merits of reelecting President Obama and Vice President Biden.  Clinton engaged the audience with his easy manner and delivered a concise informative tutorial on issues ranging from the tax code, health care reform, immigration, education, and made a powerful argument for the ideology of developing and implementing policies aimed towards the greater good.  At the GOP convention in Tampa virtually every speaker including imbecilic Mitt Romney espoused the failed Republican ideology that champions the notion that the most successful in our society should be rewarded.  This horribly misguided notion was first introduced by addled Ronald Reagan in 1980 and was simplistically yet deceptively touted as “trickle-down economics”.  The underpinning of that particular approach was that “a rising tide lifts all boats”.  Prior to being chosen by Reagan to be his Vice Presidential running mate, George H. W. Bush had mocked Reagan’s plan as “Voodoo economics” and it certainly proved to be a curse on the middle class.   It has become painfully obvious that if elected Romney/Ryan intend to resurrect that very same approach to the economy at a time it can ill afford it.

President Obama came into Office facing more challenges than any of his modern era predecessors since Franklin Roosevelt.  The economic woes were staggering, the financial industry was collapsing, banks were not loaning money, the automotive industry and its many related enterprises comprising its supply chain were about to go bankrupt, home foreclosures were epidemic, jobs were vanishing at a head spinning rate, and that large segment of our population loosely defined as the “middle class” found themselves under crippling pressures.  By virtually every independent, objective non-partisan appraisal, those profound problems were the direct result of the policies of the George W. Bush administration, just the latest version of the only playbook the Republicans ever read.

One of the most humble, gracious comments Bill Clinton made was when he discussed his work with “Both President Bush’s” and his inherent “inability” to “hate” his political adversaries.  Surely if any former President would be justified in despising his adversaries and critics, especially the Republican lead sham impeachment in 1999, it is Clinton.  But he is not constructed that way; he has far more character and integrity than his abysmal judgment regarding his private life while in Office indicates.  His larger message was that no real governing, no actual legislating, policy making or any of the people’s business will ever be conducted unless the venom is extracted from the viciously partisan discourse that has come to define the paralysis in Washington DC, in the corridors of Congress and behind committee room doors.

President Clinton clearly articulated the stark contrasts between President Obama’s Administration and a hypothetical Romney Administration.   Hopefully most among that huge television audience were paying attention.  We have the most at stake in this election the outcome of which has the potential to alter our lives in very dramatic, profoundly negative ways.

Posted by Brooding Cynyc at 5:48 PM