“WE HOLD THESE TRUTHS TO BE SELF EVIDENT”...

AND SO DO MANY OTHER PEOPLE 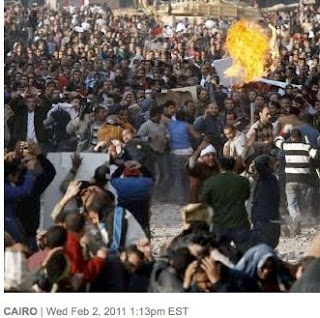 (February 3, 2011. Washington, DC) Dawn broke on Cairo, Egypt hours ago after yesterdays violence raged on through the night between the antigovernment protesters and “bands of armed thugs” allegedly doing the dirty work for the embattled President Mubarak as his Army has apparently taken a neutral position amid the escalating tension and violence. It appears that Egyptians have had enough of the 30 year reign of the oppressive Mubarak regime. The last 30 years has seen the 80 million plus population of one of the oldest civilizations on the planet struggle with 40% unemployment, poverty, human rights violations and a host of societal ills that has spawned everything from high infant mortality to the radical Muslim Brotherhood.

It is difficult to witness the live footage airing since earlier yesterday on MSNBC of the scenes in Cairo without hearing the words that Thomas Jefferson wrote in our own Declaration of Independence in 1776. The “self evident” truths that motivated our own struggle to be free of the tyranny of the British Empire resounds with millions and millions of people today living under varying degrees of modern day tyranny and rigid, strong-armed regimes deaf to the plight and problems plaguing their own citizenry.

Yesterday saw the widest scale escalation of violence as armed marauding bands of Mubarak’s “Secret Police” and other factions loyal to and paid by the 82 year old President went on the offensive against the huge crowds that have been gathered in and around Tahrir Square within stands the Egyptian National Museum. As fires blazed and automatic weapons fired echoed off the ancient streets, tanks of the Egyptian Army stood idle apparently manned by personnel unwilling to engage their fellow countrymen with the armed might at their disposal.

Just as all Americans since our founding have valued and often died for the noble, inspired concepts that “all men are created equal, that they are endowed by their Creator with certain unalienable Rights, that among these are Life, Liberty and the pursuit of Happiness”, the world is standing witness to the latest assertion of these concepts. Contrary to reports from the right-wing media outlets in the United States crassly using the “distinctly secular” uprising in Egypt to somehow promote their own narrow-minded political ideology and label it as a “radical Islamic movement”, the images broadcast via satellite tell a vastly divergent truth. It is a simple truth, a resounding truth and a truth our own freedoms are founded on. The Egyptian people are standing up and bravely proclaiming their desire to join with their global democratic brothers and sisters as they seek Life, Liberty and the pursuit of Happiness. It is that simple and, due to the geopolitics of the last 50 years in the Middle East, that complex.

Obviously, America, the Obama Administration, and our incredibly inept “intelligence community” were “caught flat-footed” by the rapidly developing events in Egypt that ultimately may topple the regime of one of our oldest “allies” in that perpetually and perplexingly troubled region. Further complicating this powder keg, Israel, one of Egypt’s neighbors allowed 800 pro Mubarak forces to move into a strategic position in the Sinai Desert. Israel signed a peace treaty with Egypt in 1979 when President Anwar Sadat shook hands over the historic Camp David Accords brokered by then US President Jimmy Carter and Israel's Yihtzak Rabin. Mubarak came to power after Sadat was assassinated in 1981 by factions of his own military incensed by the peace treaty with the “Zionist State.” Since that time Mubarak has been a key US ally in maintaining a “cold peace” with Israel as well as playing a vital yet controversial role in supporting George W, Bush’s “War on Terror.” So, for the Obama Administration and other Middle East nations Egypt and her erupting internal conflict is not an easy matter to assess or intervene.

Yes. This is about as complicated a situation as can be imagined rivaling the byzantine tensions between our “partners and allies” in the Afghanistan-Pakistan-Indian rim. We used Mubarak’s secret Police to aid in the CIA’s “Special renditions” and sent more than a few of those we rounded up on the plains and in the mountains of Afghanistan post September 11, 2001 to Egypt for the sort of special interrogation tactics W. claimed we’d not engage in. Oh yeah, oh yeah. That old wheel is going to turn around once more.

It is literally anyone's guess what the Egyptian dusk of tomorrow will bring or not bring.

Not matter. People the world over hold certain truths to be self evident. Many have died for that just cause and many more will. Hopefully we will not see massive chaos and death live on MSNBC. But, we might.

Copyright TBC 2011 © All Rights Reserved
Posted by Brooding Cynyc at 12:03 AM