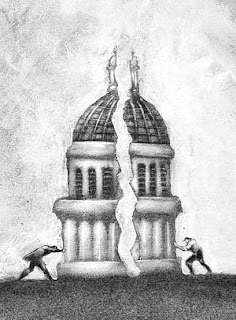 
(October 13, Washington, DC) Let's face it, no matter which side of the political divide you inhabit, your Party of choice is letting you down. The perpetual state of gridlock that has come to define national politics, legislating, and governance is now the norm: ineffective, inefficient and rabidly partisan are the defining characteristics of members of Congress and the White House Administration.

Our tripartite system of government has been subverted over the last 15 years or so by ideological divides, endemic corruption, special interest influence and money as well as having people of lesser and lower intellect, character, morals and conscience than at any time in our history occupying offices in Congress, the White House, Governor's Mansions and State Legislatures. Our two Party system is broken, plain and simple. For too long a complacent electorate has allowed the fringe, “base” elements of each Party dominate agendas, platforms and the overall debates no matter the issue, irregardless of the importance. Examples of this dysfunction, just in the last nine years, are too numerous to list.

As a nation we have faced tremendous challenges since 2001 that have required capabilities and abilities from our federal government and those elected to serve within it that simply do not exist anymore. Arguably, this decline has been progressing since the Reagan Administration but has certainly come to be the unimpeachable reality since the turn of the millennium. The fact that the events of September 11, 2001 occurred was the first major indication that there was rampant ineptitude, dysfunction, and lack of sense of duty pervasive in government at every level in the myriad alphabet agencies comprising the “intelligence” community, through Congressional oversight committees. Hurricane Katrina was yet another example, albeit of a different sort and nature, that our federal government had become useless.

There was a time, not too long ago, that principals were motivators for our elected officials, now, it is all about money, incumbency and narrow self interest. Not even the aftermath of 9 11 01 could break the greed mode of Congress. Homeland Security funding devolved into politics as usual even before the smoldering heaps of wreckage in lower Manhattan began to cool. Funds meant for Homeland Security were divided up and diverted to pork barrel spending in an orgy of arrogant greed and self serving largesse. To this day parts of the Gulf Coast that had been decimated by Hurricane Katrina in September 2005 remain in virtually the same condition they did days after the flood waters resided. We remain engaged , after thousands of lives sacrificed and multi-trillions of taxpayers money has vanished in the black hole that is Iraq. The same could be said of Afghanistan except that was where our true enemies and battlefields were and remain to this day. The damage to every aspect of what America is and represents and, actually, how we function, was callously trampled and crapped on by the Cheney / Bush Administration in their eight year reign of neoconservative, messianic, wholly misguided reign of ignorance, idiocy and incompetence. They shred our Constitution with impunity.

Barak Obama won the Presidency last November with a virtual mandate. His was a commanding victory that included winning the majority status in both Houses of Congress. After Pennsylvania spineless, asshole, Arlen Specter, and Minnesotan Al Franken were seated on the Democratic side of the Senate aisle, the Dems had a “super majority”; 60 votes which gave them unlimited ability to pass legislation and usher through important components of Obama's ambitious agenda. The majority in the House was equally significant and the fact was that the Democrats really did not need ANY Republicans to pass bills. If the Republicans had these majorities you can rest assured they would be churning out bill after misguided bill. The GOP had been maniacal lemmings for the entire two terms of the Cheney / Bush Administration; they marched in lock step to the insane drumbeat coming from the White House allowing Cheney and company to have their way in all matters foreign and domestic. Congressional oversight was non existent and, by all appearances thus far, oversight will remain a low priority in the Democratically controlled Congress. We have come to expect nothing less, haven't we?

Yesterday's vote in the Senate Finance Committee on some half-assed version of a “Health Care Reform” bill passed 14 to 9 with the sole Republican vote cast by Olympia Snowe of Maine. This comes after four months of the President advocating for bipartisanship which was met with such overt blatant resistance that many key Republicans spent the month of August loudly and proudly proclaiming they would not “vote for any bill” no matter the particulars. Senate fossils like Chuck Grassley, Mike Enzi and Ben Nelson (among others) held the entire process hostage. These men from sparsely populated state's were in the position to derail all efforts in reform simply because they could; seniority had put them in pivotal Committee positions. It is also no secret that all of them, the entire “Gang of Six” and many others are bought and paid for by the health care industry lobby, the big pharmaceutical corporations pouring huge amounts of money into their campaign coffers. They cast their lot with their contributors and sold out the American people. Yet, the Democrats, from the President on down, insisted in trying to court and sway some Republicans their way. They failed royally. The bill voted out of Committee yesterday is in no way, shape or form, meaningful “Health Care Reform.” It is made up basically of some meager cosmetic measures to be applied to the health INSURANCE industry.

The Republicans framed this debate this summer and the Democrats, despite their majorities, feebly fought back. The GOP was calling the President's efforts “a government take over of our health care.” What the hell were they talking about? Who was going to “take over” what? It was a pitiful summer for the Democrats and, essentially , for the American public, particularly those among us without health insurance or struggling to pay our premiums. The concept of “A Public Option” was torn apart and mutated, bastardized by the GOP and came to represent one of the most damaging of all the outright lies they spewed forth. The media was complicit all along the way no matter what their ideological bent. (Yes, the media, all the media, operate from some point along the social / political spectrum despite their protestations to the contrary.)

We are poorly served by our elected officials and have been for so long that we hardly ever think anything positive, that benefits the greater good, can ever or will ever be enacted. It has been many years since any Congress or Administration acted in accordance with public opinion or for the greater good. Public sentiment in recent years has been callously ignored and continues to be. There is no wonder why American's have become cynical and complacent: they have witnessed a shocking breakdown of American Democracy. From a “war of choice” to the enormous bailouts of banks, brokerages and corporations, our government has acted in direct defiance of the populace.

The true colors of our elected officials have been laid bare by the health care reform debate. What we have seen and learned about some of the players involved is sickening. Until we as a voting people begin to pay attention to issues and express our opinions in the voting booth or at the ballot box, we will continue to have the ilk of people we currently have in Congress and in the White House.

The most misunderstood, distorted and excoriated component of some proposed versions of health care reform is what is known as “The Public Option.” The fiercest resistance to a public option has come from the GOP, Republican members of Congress, most of whom have taken funding from various entities in the health insurance / medical /pharmaceutical / insurance complex. The public option more than any other component or amendment to any reform bill is the most threatening to the status quo. It would not be “government run health care” as the lying, loud mouthed, corrupt opponents have been railing against. It would be no more a government run health care program than Medicaid which, as most users will confess, works quite well for all intents and purposes. Without a public option the health insurance industry, which has all the appearances of a collusive monopoly, will have free reign over the market. A public option would present the public with a choice; voluntarily electing to purchase health insurance from a government entity would make the market competitive and break the stranglehold of the health insurance / medical /pharmaceutical / insurance complex. Heaven forbid there be some equalizing force, some leveling of the playing field for Americans who struggle with medical insurance premium costs, the astronomical cost of medical care and treatment and the restrictive, exclusive practices that leave so many of us uninsured and uninsurable.

The battle is far from over. The bill voted out of the Finance Committee yesterday is just the first piece of “legislation” that will be voted on by various committees and conferences. Sadly, in their pursuit of bipartisanship, the Democrats ceded their numerical advantages and will, most likely, have nothing to show for it aside from some bastardized, watered down bill that falls far short from real, tangible health care reform.

What we have seen over the course of the last few months is that Democrats cannot govern and Republicans are pure self centered oppositionists. The result of this awful equation is that the American public looses, as usual when it comes to Washington DC politics.