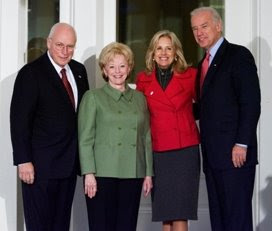 In coming and out going VP’s will
enter and exit each other’s wives.

(Nov.17, Washington, DC) In one of the most unprecedented, unusual and controversial events ever associated with the executive transition of power, the current Vice President, Dick Cheney and his successor to be, Joe Biden, will spend a weekend engaged in “wife swapping” prior to the Inauguration on January 20, 2009. This announcement has caused strong reactions from all quarters domestically as well as internationally. The press corps seemed truly caught off guard as the usually taciturn, cranky, Lucifer-like Cheney made the stunning announcement earlier today.

Last week while the Cheney’s were hosting a tour of the official Vice Presidential Residence located on the grounds of the Naval Observatory, a Cheney aide who was present and speaking anonymously said, “Well it was obvious right away. Sparks were flying. Lynn Cheney was just gushing over Joe Biden, she wouldn’t leave him alone. You could tell she was smitten.” This source also noted that “Mrs. Biden did not appear to like Dick Cheney very much. She kept her distance. He tried to talk her up and, at one point, I believe he grabbed her ass. Since she didn’t smack him in the head after that grope, Dick took that as a good sign.”

As the wives separated from their spouses to continue with the tour, Cheney and Biden engaged in private talks behind closed doors. They each had several advisors present during this high level meeting which primarily focused on national security issues. Kurt E. Dorkman, a long time Biden confidante who was present for the private meeting said “The Vice President and the Vice President-elect seemed to warm up to each other once drinks were served. Dick Cheney was downing shots of Old Grand Dad like a sailor on leave. He began telling some off color jokes. Senator Biden was drinking Rusty Nails then switched to Harvey Wallbangers. They were both getting pretty tanked.”

In his eight years as Vice President, Cheney has become one of the most hated men on the planet and is the most unpopular VP in US history. His ogre-like demeanor, his support of brutal torture tactics and his vicious beatings of George W. Bush, have all cemented his reputation as a scumbag of epic proportions. However, aides close to Cheney said his private life has been one of seeking out increasingly kinky sexual experiences. A Secret Service agent assigned to Cheney speaking not for attribution said, “We on his personal protective detail had to make great efforts to keep his sexual escapades secret. Had they leaked, it would have been dangerous for the entire world, crippling to the administration and would have meant all of us on the detail would be tortured then beheaded. It has been a difficult eight years for us.”

A handful of the agents on the detail also spoke privately and insisted their identities not be revealed. They said feared for their lives but, “now that this lame duck administration is about to leave, we are compelled to tell the truth about Dick.” According to these agents Mr. Cheney “really went off the deep end” after his lover, Scooter Libby had to leave the White House. “It was tough on Dick. He and Libby had been sexually intimate for many years. After Scooter resigned, Cheney began to seek out bizarre, often risky sexual adventures. We had to sneak transvestite prostitutes into his residence as well as midgets, a goat, several strippers and the Chippendale’s. It was a real challenge.”

Dick Cheney posing for Scooter Libby
on one of their secret trysts at Camp David.

Reliable sources who have known Dick Cheney for many years have long been familiar with his “peculiar tastes.” A boyhood friend from Cheney’s youth in Wyoming, Clark Dirt, now serving a life sentence in Montana State Penitentiary, for a variety of sex crimes and crimes against animals, crimes against humanity and check forging, speaking publically for the first time about Dick Cheney said, “He was always strange; even stranger than me. He was just smarter about it. But, man, did he have a temper. He used to like beating women and small animals. But, I have followed his career and can easily see why he is responsible for killing about a million people. I wrote to him once in 1991 and I spent the next 10 years in solitary. Go figure. I mean, I’m a registered republican, in the NRA and am born again.”

There are no further details available about the upcoming wife swapping weekend for the Cheney’s and Biden’s. One source said that the event was originally to take place at the VP residence but, at Cheney’s insistence, “It has been moved to an undisclosed location. Probably one of his secret bunkers he has converted into an S&M parlor.”