HORMONES AND HUBRIS
ARE THESE GUYS FOR REAL? 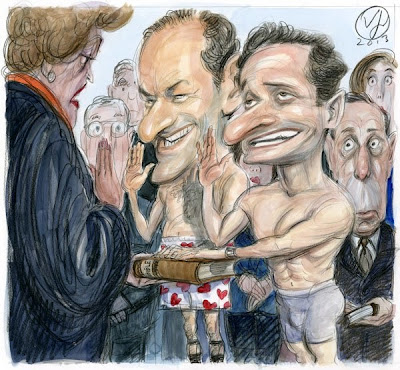 (Friday July 12, 2013 New York City) Let’s not be disingenuous about this, there is no need to be pretentious or righteous.  This has nothing to do with repentance, redemption, or salvation.  This is about ego, two massive egos that have been subdued for as long as they could.  Now these monstrous egos are roaring back into the only place they have ever felt truly alive and at home, the political spotlight.  These two men are not drawn into the scrum that is politicking in New York City by some high-minded ideology and a desire to “serve the people of New York City”.  No, even giving lip service to such blather is shamefully insulting but men like Anthony Weiner and Eliot Spitzer know no shame.  They are inherently incapable of anything approaching shame, embarrassment or humility.  Their public and private pasts clearly illustrate that they bring nothing to the public forum aside from their oversized egos.  Neither distinguished himself in any substantial way in their former political offices and certainly time cannot change that fact.

The media here and nationally have taken to calling New York City a place where “second chances are possible” and where the people “love a good come-back story.”  That we might but we’d rather see feel good stories about Mark Sanchez or Jason Kidd rather than disgraced former elected officials emerging from the cocoons of lesser fame than either could tolerate any longer.  In some ways NYC politics is a blood sport and yes, we all like a good slugfest, but the stakes are too high, the issues that will affect our futures as New Yorker’s are of a far greater urgency than a heavyweight bout at Madison Square Garden.  If it were only a title belt on the line we’d be easily be willing to watch them beat each other and all their many and varied opponents into bloody pulps but, what is at stake is Gracie Mansion, City Hall and the financial well-being of our City.  Even those among us with the strongest of stomachs are already cringing at the prospect of a full-blown campaign cycle with Weiner and Spitzer casually sidestepping issues about character, responsibility, trust and truth while engaged in the sordid “retail politicking” such campaigns demand.

Weiner’s name lends itself oh so easily to all sorts of phallic puns.  Obviously the sexting escapades that forced his resignation from Congress after seven terms make the puns all that much lurid.  The Congressman had to own up to the embarrassing fact that he sent pictures of himself wearing boxer-briefs in the Congressional gym and sent them to numerous women via a social media site.  Some of the photos showed the Queens Representative clutching his erect wiener.  So, like it or not Weiner inserted his wiener into the public domain.  The idea that a mere two years after his very high profile fall from grace is to many New Yorker’s insulting.

Weiner’s return to politics is just his latest display of hubris and chutzpah.  His time in Congress was grossly unremarkable in that he never managed to craft a bill or make any impact on any public policy legislatively.  His only claim to fame, such as it was, was his addiction to publicity.  Anthony Weiner never saw a TV camera he wouldn’t talk into despite having nothing of any substance to say.  He was a savagely partisan blowhard all too eager to be a sharp elbowed politician and self-serving pseudo-advocate for populist opinions and divisive social issues.  His resume is conspicuously devoid of any accomplishments or abilities that qualify him to be the next mayor of the largest City in America.

Since 1994 New Yorkers have become to having a Mayor who is more a manager than a politician.  Rudy Giuliani was Republican by Party affiliation although much of his ideology was contrary to the GOP establishment.  He governed the City in the more moderate socially yet fiscally conservative mold of a “Rockefeller Republican”.  His earlier career as a Federal Prosecutor served him well during his tenure in City Hall and the City underwent a remarkable transformation under his stewardship.

Michael Bloomberg, Mayor since 2001, has also governed in a distinctly non-partisan manner.  While bringing his acumen as a highly successful businessman to his job as Mayor, he continued many of the policies and initiatives Giuliani had first championed.  Although he too ran as a Republican, he has governed as a pragmatic moderate.  He officially changed his Party affiliation to Independent just a short time into his first term.  Under his watch the City has seen unprecedented reductions in crime, a steadily increasing tax base, and wholesale improvements in the important “quality of life” issues that affect new Yorkers daily.

This recent Mayoral history only serves to emphasize the evolution of this very unique job.  Weiner has neither the experience nor temperament to assume the mantel of his two immediate predecessors.    It is a sad fact that the current filed of Mayoral hopefuls is as lackluster as it is.  Weiner’s entry into the race has already altered the dynamics of the Democratic primary campaign which is further proof of the overall weakness of the contenders.

The case of Eliot Spitzer is different in significant ways although the scandal that drove him from the Governor’s Mansion in 2008 after a scant 14 months in Office.  He had been a very effective state Attorney General aggressively prosecuting Wall Street white collar criminals scoring several high profile convictions.  After his identity was revealed as a client of a high-end prostitution operation he was forced to resign.  He was alleged to have spent over $80,000 for the services of prostitutes while Governor.  Since his shocking public disgrace he has slowly emerged back into public life as a part time commentator for MSNBC and CNN most notably.

Spitzer, running for City Comptroller, is seeking a far lower profile job than any he has previously held.  The Comptroller is an Office that most New Yorkers give little thought too.  The position is, however, vitally important to the fiscal management of the City as well as the administration of public employee pension funds as well as all matters of how the City’s money is managed.  He, unlike Weiner, is qualified for the Office he now pursues.

Since announcing his candidacy just four days ago he has embarked on a whirlwind “apology tour” on morning news shows and other public appearances. During a televised interview earlier this week, he teared up as he explained the “pain” that his scandal has caused him and that his problem was related to unfulfilled sexual “urges”.  Apparently he has found a legal outlet for his urges since leaving Albany with his tail between his legs and his reputation forever marred.

Spitzer likely would be an effective and able Comptroller although his whore-mongering presents questions of judgment, discretion, and character.  If anything his entry into City politics is already causing problems for Weiner; any hopes Weiner once harbored that the public would forget about his sexting scandal have been demolished by Spitzer’s sudden candidacy.

The history of New York City politics is rife with scandals of every conceivable ilk.  The same can be said for State politics as well.  A thick artery of corruption runs through the various legislative bodies locally and statewide.  But the dual scandals of Spitzer and Weiner have not been those of greed, avarice, extortion, nepotism, bribery, payoffs or payouts.  No, these two men have transgressed recklessly in their personal lives while holding public office.  Such transgressions are not as readily forgiven and forgotten by NYC voters.  It some subtle ways their past behavior is more difficult for your average New Yorker to fully understand.  There is an entire bloc of voters of a certain age who simply do not know much, if anything about texting let alone sexting.  Still other voters have difficulty comprehending why the Governor of The State of New York could allow himself to be caught in a prostitution scandal.  These are real questions and they should not be discounted casually.  Holding public office requires the endowment of public trust and the blatant errors in judgment Spitzer and Weiner are guilty of speaks directly to that intangible idea of the public trust.  Both of these many have already broken the trust once given to them by the voters who put them in Office.  We all need to think long and hard as we consider the candidates, their qualifications, qualities, abilities and personalities.  Hopefully more respectable candidates will emerge to prevent the return of these flawed men to public office.