GOODBYE SENATOR McCAIN, TIME FOR YOU TO GO 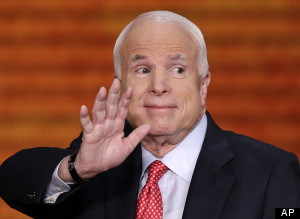 (Sunday November 18, 2012.  Washington, DC) Even those with the powerful gift of memory would be hard pressed to recall the last time Arizona Republican and 2008 failed Presidential contender, John McCain was right about any important issue of domestic or foreign policy.  Actually, not only has he been consistently, grossly on the wrong side of each and every topic of the day, his propensity for making outlandish accusations, posit conspiracy theories, and generally be fatally misinformed is firmly cementing his place in the column of once decent politicians who stayed too long in Washington and became ossified cranks.  Apparently he has lost (and maybe never really possessed) his much touted “expertise” on the many military, national security, and foreign policy challenges of the day.  On some level it is difficult to not feel a pang of sympathy for the addled Senator.  There was a time he was a widely respected “voice of reason” in the Senate known for his willingness to work with the opposition Party.  During his failed attempt to capture the GOP Presidential nomination in 2000, he was somewhat of a darling of the Washington press corps for his seeming constant availability and for his candor.  His “Straight Talk Express” brought a healthy, much needed dose of honesty and vigor into the campaign cycle that ultimately saddled us with George W. Bush for the next 8 years.

Ever the wily politician McCain sold his soul to Cheney/Bush and company in every conceivable way on every issue even those he had previously espoused contrary views.  He voted for the Cheney/Bush “war of choice” in Iraq, peddled the unvarnished blatant lies of that administration and has basically been a shadow of the Senator he once was.

Perhaps it is just that his advanced age, the crushing, humiliating trouncing the American people handed him in 2008 when they resoundingly voted for Barack Obama for President, and far too many years in Washington being a party to one too many sell-outs, maneuvers of political expediency, and a torrid love affair with media cameras and microphones, that have finally caught up with the old guy.  Whatever the etiology of his chronic erroneous thinking and incurable inability to think before he speaks; it is time for John to go.  Having won a bruising Republican primary in 2010 where he managed to win his fifth term in the Senate, John is not really going anywhere any time soon.  However, he should take a break from interviews, from throwing mud from the sidelines and at least make an attempt to conceal his unbridled bitterness at having lost to President Obama in 2008.  It was that experience more than any other that has had the most profound effect on the 75 year old.

That McCain never liked Obama even when the President was just a freshman Senator from Illinois has never been a secret. Throughout the last 4 years McCain has been a nasty, mean-spirited critic often proving himself to lack the poise and thoughtfulness required to be the President of the United States.  McCain has amply demonstrated since his brutal defeat to Obama that he lacks the temperament, intellect, restraint, and judgment to serve as Commander in Chief.  He has shown us clearly why we should all be thankful he lost that election.

McCain came to the Senate after a naval career during which he spent upwards of 5 years as a Prisoner of War (POW) after being shot down over Viet Nam.  He was badly wounded when he ejected from his damaged aircraft, captured and endured years of torture and solitary confinement while imprisoned in the notorious “Hanoi Hilton.”  The courage, integrity, resolve and fortitude he summoned to survive his captivity is difficult for most to imagine and very easy for all to honor and respect.  Knowing who this man was makes witnessing what he has become sadder still.  Once known as a political “Maverick” he has devolved into a grouchy political hack often playing sidekick to the effete South Carolina Republican, Senator Lindsay Graham (but Graham’s another story for another time).  Between them they have been horribly wrong on every issue but their most egregious missteps, miscalculations, and misinformed rhetoric has been on matters of State.  From Iraq to Iran, from Libya to Egypt, from the Arab Spring to the Syrian uprising this hapless duo seem to have no memories of our most recent history (and on-going) forays of military intervention nor possess any understanding of the complexities and nuances required by the United States when acting on the world stage.

An angry, sometimes incoherent McCain has blustered and blundered into irrelevancy.  While he was regarded for many years as a pragmatic, informed, measured thinker on foreign and military policy as well as National Security and Intelligence issues, in his current incarnation is proves daily he can no longer be seen to possess any of those traits.  Quite the opposite.

The latest cause for McCain’s hyperbolic ranting revolve around the attack on the American Consulate in Benghazi, Libya, on September 11, 2012 in which our Ambassador, Christopher Stevens and three other Americans working at the Consulate were murdered in what was initially thought to be a “spontaneous demonstration” by local groups to express their anger over a half-assed movie which depicted the Prophet Muhammad in a most insulting, offensive, and crudely disrespectful manner.  It has since come to light that rather than the lethal attack on our Consulate being an angry mob protesting, it was a well-planned coordinated terrorist attack.

The main focus of McCain’s ire is the current United Nations Ambassador, Susan Rice, who it is believed will be nominated by the President to replace departing Secretary of State, Hillary Clinton.  At the center of his conflated “controversy” is his assertion that “Ambassador Rice lied” to the American people while appearing in NBC’s “Meet the Press,” on September 16, 2012, where she cited “preliminary information” and that the FBI was investigating.  Her appearance on MTP and other Sunday political talk shows was at the behest of The White House.  Ambassador Rice was armed with “talking points” provided not only by the FBI but the CIA as well.  Rice continued, “What happened in Benghazi was in fact initially a spontaneous reaction to what had just transpired hours before in Cairo, almost a copycat of the demonstrations against our facility in Cairo, prompted by the video,” Ambassador Rice concluded,” “Opportunistic extremist elements came to the consulate as this was unfolding, they came with heavy weapons, which unfortunately are readily available in post-revolutionary Libya, and it escalated into a much more violent episode.”

Susan Rice was making these statements 5 days after the attack that killed our State Department officers in Libya.  If anyone such as McCain, the self-proclaimed “expert” on foreign affairs should be acutely aware of, is that details of events such as the Benghazi attack usually take some time to sort out.  A mere 5 days after the attack, the prudent tact for the Administration and their appointed spokesperson on this particular incident for the Sunday morning circuit, Rice, stated the “facts” as she had been briefed by the FBI and CIA.  That the attack was shortly after September 16 declared officially as a “terrorist event” in no way diminishes the veracity of Ambassador Rice’s comments.

Now, with this new burr stuck in his ass McCain is calling for a “Watergate-style investigation.”  Just when it appears that blithering bloviating John cannot possibly sink lower he demonstrates to all of us just how much deeper his bitterness and personal vendetta against President Obama can take him.  Remember, this is the same John McCain who bought all of Condi Rice’s outright fabrications, lies, and cherry-picked information that cost us unknown amounts of human limbs, lives, blood and pain, trillions of tax dollars, incalculable death of innocent Iraqi civilians and virtually guaranteed Iraq will be an unsettled, seething nation for a good long time to come and has now allied with Iran for support instead of buying the false bill of goods regarding “installing democracy” that Cheney and Bush’s Rice spewed out like just so much pabulum.

Yes, John, stop making a complete ass of yourself, stop being so petulant, contrary, petty and petulant.  Your time has come and gone and it appears that you may be the only one not to recognize that fact.  Go home, retire, sit on one of the porches of your 9 homes and get a hobby.  Leave governance and policy to those much better suited, well informed, and reasonable minds, a group you have long since lost your membership in.