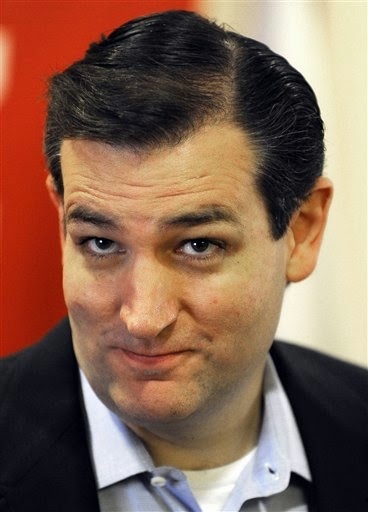 
CRUZ AND HIS COMPETITORS TO ENGAGE IN CIRCULAR FIRING SQUAD,


CRUZ TOO EXTREME FOR HIS OWN PARTY ESTABLISHMENT

(Monday March 23, 2015, Lynchburg, Virginia)  There could not have been a more contrived setting for such an event as Liberty University; the Evangelical institution of higher learning founded by the late Reverend Jerry Falwell who also happened to be one of the founding fathers of the Christian conservative political movement once hailed by true believers as “the moral majority”.  The gathering here this morning was mandatory attendance for all the university’s students and they showed up in force to avoid the sanction of a financial penalty.  And so it was here that the freshman Senator from Texas, the Tea Party champion and darling, Ted Cruz, appeared to formally announce his candidacy for the office of the President of the United States.  It was oddly entertaining theater.  His 20 plus minute speech contained plenty of autobiographical and familial history as well as enough Republican “red meat” to satisfy the most carnivorous of GOP primary voters; a solid block of true believers rabidly anti-Obama, common sense, logic and science averse zealots ready to cast their votes for anyone proclaiming to be the rebirth of Ronald Reagan on steroids.  But that is putting it mildly.

Ted Cruz has as much of a real chance of winning the office he seeks as does a slab of Texas BBQ ribs.  The 44 year old Senator is famous for his bloviating and bluster while unable to boast of any appreciable legislative initiatives of his own design.  Actually he is much maligned and, in some quarters, deeply despised by members of his own Senate Caucus and the Republican Party at large.  To classify him as a “fringe candidate” would be unduly generous and kind.   Cruz is just the first of what will no doubt be a carnival act of Republicans vying for media coverage and money in campaigns destined to go nowhere.  But, for the next 19 months or so the American people will be forced to tolerate the blitzkrieg-like campaigning Cruz and others will rain down upon the political landscape.

Cruz will soon be joined on the campaign trail by equally unqualified, delusional, and egotistical imbeciles; a collection of single issue, no chance, pandering jesters ranging from Ben Carson, Donald Trump and Mike Huckabee to Marco Rubio, Rand Paul, Chris Christy, Scott Walker, and some even remarkably lesser known and darker horse characters including John Kasich, Bobby Jindal, effeminate Lindsay Graham, and perhaps Bozo.  Yes, this election cycle will be complete and replete with crazies and loonies from across the right wing spectrum and beyond.  The specter of Jeb Bush, yes, another Bush, seems to have not discouraged anyone from forming an exploratory committee, fund raising, or jockeying for position in a field so crowded by lunatics that it will be difficult to decipher the truly mentally disturbed and imbalanced from the devoted semi-legitimate “conservative”.  Perhaps the first of this collection to recognize the fact that Barak Obama is not on the ballot might have a gamblers chance at breaking through the bullshit and static.

Citing today as the 240th anniversary of one of our founding patriots, Patrick Henry’s, “Give me Liberty or Give me Death” speech before a court in Richmond Virginia, Cruz opted to borrow John Lennon’s song “Imagine” lyrics with a full throttled request for all the listening audience and beyond to “imagine” what a Ted Cruz presidency would look like.  It was a scary, sanctimonious screed of crap, executive impossibilities, and denials of reality, that amounted to rendering the notion of actually imagining what this yahoo would if he could do as president such a creative stretch that very few could travel his rhetorical trail and keep a straight face.

True to form Cruz tossed out his imaginary presidential acts such as repealing “Obamacare”, abolishing the IRS and installing a flat tax by which every taxpayer could submit their tax return on a “postcard”.  President Cruz would somehow create “millions of high paying jobs” while making “America energy independent” Naturally in his fantasy presidency he would increase defense spending, call radical Muslim extremists what they actually are, make certain Iran never had a nuclear weapon, unconditionally support the Apartheid State of Israel, rely on “science” in matters such as “climate change” and restore God Almighty to His rightful place in our Democratic Republic.  Yes indeed, he would be one tough as nails, hard-charging, hard assed president and the world would know there’s a new sheriff in the White House who ain’t likely to dance around the most thorny issues of our day and time. The longer he spoke the more deranged he appeared; his part revival tent preacher cadence mixed with a shoddy used car salesman’s slimy pitch made him seem as cartoonish as his one dimensional imagination.

And so the games begin.  What will no doubt be a literal circus of conservative clowns, anti-Obama acrobats twisting themselves into all manner of bizarre postures to capture the GOP “base” and other charlatans, snake oil salesman, and galoots with absolutely no chance whatsoever to actually win their Party’s nomination will now begin to declared themselves to be contenders in the race.  They will descend into irrelevant two of the most irrelevant states, Iowa and New Hampshire, because of their significance in the republican primary process where they will practice the absurd quadrennial rituals of courting hog farmers, maple syrup extractors, and others who are no more reflective of our country’s diversity than the moon.

For the brief time being Mr. Cruz has the spotlight and he hopes to bring on his brand of thunder and lightning before the others jump into the fray.  Cruz will find himself in a dog fight with other Republicans each trying to out maneuver the others in what promises to be an entertaining spectacle of right wing demagogic sociopathy, malignant lunacy, lying, pandering, and posturing.  The other potential candidates he most desires to upstage and out bluster are others seeking to claim the mantel of the most socially conservative, a dubious distinction at best given the fact that the country as a whole is far more moderate and middle-of-the-road on virtually all the issues the Republicans champion.

Email ThisBlogThis!Share to TwitterShare to FacebookShare to Pinterest
Labels: GOP Lies, GOP Lunatics to be out in force, Republican Party Primaries, Ted Cruz