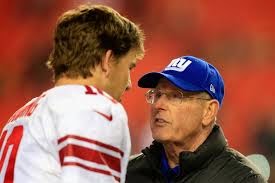 (Saturday, September 20, 2014 East Rutherford, NJ)  Here we are again.  Entering the third Sunday of this NFL season the New York Giants are once again in dismally familiar territory.  Off to another 0-2 start and squaring off against a powerful, well rounded team, the Texans tomorrow here at Met Life stadium, 0-3 seems likely.  Giant fans have grown accustomed to starting behind the eight ball but after the disaster of last season it is fair to say that most expected better out of this year’s squad.  Certainly Coach Tom Coughlin did.  What is a disturbing characteristic of the recent Giant teams is the distinct lack of fire in the belly.  They epitomize mediocrity collectively and an undercurrent of ambivalence individually.  No, the Giants are not blessed with a talented roster; they haven’t been for years.  That situation is the direct result of the ownership and upper management of the franchise.  They do not scout properly, they never draft wisely, and they don’t pursue household name free agents with anything near the aggression they should.  This is a team of “no names” except for the franchise quarterback, a two time Super Bowl winner, Eli Manning.

Manning had his worst season ever last year.  His statistics were abysmal and he often appeared more like an overwhelmed rookie than a seasoned, tough, decisive, veteran master at his craft.  Even when Eli has been at his best he has never exhibited that competitive fire in the eyes, the fire that has long burned in his older brother Peyton.   There have been many, many times when Eli has appeared to be so disinterested and simply going through the motions that one can be left to wonder and ask, “Does he really want to do this anymore”?  It may plainly be that his best years are behind him, that he has lost something, some things physically and others less tangible, harder to define and it is difficult to access from a distance.  Coughlin certainly must know where Manning’s head is at; he cannot disregard the facts and has to be asking himself all sorts of questions.

The blame for the current circumstances the Giants are facing can be squarely laid on the threshold of those in the Football Operations Office.  Jerry Reese                 Senior Vice President and General Manager, Kevin Abrams Assistant General Manager, Marc Ross Vice President - Player Evaluation, Ken Sternfeld -                 Director of Pro Personnel, and Matt Harriss - Director of Football Operations are the actual architects of this mess.  These are the men who should be fired; this is the hapless crew that consistently makes serious player personnel decisions.  They cannot evaluate talent nor can they draft strategically.  It is always amazing how the Giants manage to miss opportunities at draft time and equally concerning how they play the free agency market.  It seems that most other teams work the draft better.  For some reason the Giants do not go after the highly talented NFL hopefuls from the big powerhouse collegiate conferences such as the SEC.  They appear content to draft players from the small northeast colleges perhaps because Coach Coughlin and many on his staff have extensive histories at schools like Syracuse, Boston College, and some other ACC colleges.  The Giants just seem to never go after the big names coming out of college, they never look for talent beyond their own backyard and that is a tremendous weakness.  For all of the $116 million they spent this past off-season filling up their roster they have precious little to show for it.  Yes, they have had to contend with some injuries but so does every other team.  The Giants lack depth at key positions and even many of their first team on both sides of the ball are average at best.

Coughlin has to be second guessing himself and his superiors over the decision to bring in 37 year old Offensive Coordinator Ben McAdoo and his brand of “West Coast Offense”.  To his credit Manning bought into the new offensive playbook enthusiastically going as far as changing the very mechanics of his throwing motion.  He has been worked hard to improve his foot work, maneuver better in the pocket and try to buy himself time behind an Offensive Line that leaves much to be desired.  He takes far too many hits and that partially explains why he is often given to make costly mistakes from poor decisions.  To be sure, Manning does not have a compliment of solid receivers or running backs and all too often the pressure of the game is upon his shoulders.  Right or wrong that is the way it is; the quarterback, especially one of his pedigree and accomplishments, is the face of the franchise, the captain of the ship, and will always be subjected to disproportional responsibility for the performance of his entire team.

Giant fans and insiders alike questioned the rationale of hiring Ben McAdoo as the Offensive Coordinator.  They knew he was coming on board with an entirely different offensive philosophy that many wondered how Eli could benefit.  Manning is now in his 11th year and McAdoo’s system required Manning to make many changes, the kind of changes in the basics of his craft that had served him so well from his collegiate days until very recently in franchise history.  The “Teaching an old dog new tricks” doubts flew like so many snowflakes over the frozen Meadowlands last January when McAdoo was hired.  And there was ample reason to be skeptical about his hire.  In the coaching circles of the NFL too much value is given to a coach who was born from a specific tree.  Over the years we have seen dozens of head coaches, coordinators and position coaches enjoy success after cutting their teeth under legendary coaches such as Bill Walsh, Bill Parcells, Mike Holmgren, and Andy Reid.  For many of those who grew from those renowned football minds, their experiences were not transferable; they could not bring the magic of some super coach’s “system” with them to a new team.  The magic in so many of those systems was in the players that executed the game plan.  Some of the most successful of those masterful systems, high fire-powered offensives and aggressive, punishing defenses were actually built around the players they already had.  All the coaching knowledge and techniques, all the motivational psychology and exotic X’s and O’s on the chalkboard are meaningless in the absence of the player personnel to bring life to the game plan.

THE TIME IS NOW

Some in Giants Nation are not yet of a mind to think all is already lost as far as this season is concerned.  That spirit is the hallmark of a true, loyal, not “fair weather” fan and is admirable.  Every fan is loyal and supports their team through thick or thin.  But, as fans it is difficult to dismiss the growing concerns, the obvious questions are heating up and, sooner rather than later, something’s got to give.  Some may see this as a call of desperation.  It is not.  But, we are already facing a dire reality and the 2-0 Texans will be here tomorrow. Perhaps now is the time for our 70 year old Coach Coughlin, the man who had brought us out of the wilderness during his tenure to make radical changes.  He knows this game of football and his decades of experience is what he needs to call upon now.  He needs to follow his instincts, scrap the Wacadoo Offensive, exert his will on both the offensive and defensive squads and get back to basics.  He has to do what he can with the players he has.  Every coach does.  But Tom Coughlin is probably the best man for this job of righting a ship that is perilously close to going aground on the rocky shores of another lost season.  Yes, his job might be at stake but the ownership has a deep and abiding respect for Coach Coughlin both as a man of character and integrity and as a football man.  They should allow him the latitude to do whatever he feels in his gut he can do to save this season before it is totally beyond reach.

Posted by Brooding Cynyc at 4:15 PM