IT’S NOT EASY BEING BLUE 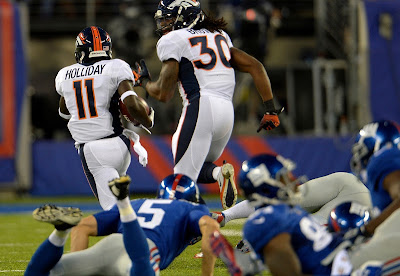 Wide receiver Trindon Holliday (11) of the Denver Broncos leaves the New York Giants behind on this 81 yard punt return for a touchdown to make the score 37-16 at METLIFE Stadium.

(Sunday September 15, 2013 East Rutherford, NJ)  As the home team crowd drifted out of MetLife Stadium earlier this afternoon they were an exceptionally muted lot.  One sentiment heard over and over again was that this may be a long tough year for the Giants unless they get it together soon.  Yes, it is only week two in this NFL season but the outcome of an entire season can be determined in the first few weeks.  This is particularly true with the NY Giants.  We’ve seen this play out before; all too often.  Despite the team’s success during the 10 years of the coach Tom Coughlin and QB Eli Manning era, the Giants have a tendency to play with a haplessness that is difficult to ignore.  For some reason the Giants never seem to have the fire in their eyes that is required to compete week after week in a league that has shown more parity over the last five years.

It is true, two losses does not make a season however the NFC East is a tough division and with their loss last week to their divisional rivals, the Dallas Cowboys they already have dug the first few shovels of a hole that could grow deeper and darker with each upcoming week.  The flashes of brilliance they showed today are just too few and far between to inspire confidence.  Eli Manning and Victor Cruz will pile up the yards but the Giants just can’t seem to convert a solid offensive drive of hard inside running and effective down field passing into touchdowns. Of course along the way Eli will toss out a disturbingly high numer of interceptions often putting a rapid end to a solid drive.  That is a weakness that is a guaranteed recipe for disaster.  Teams that find themselves having to settle for field goals from the red zone are not finishers; each time they reach that toughest 20 yards of any drive and fall short of a TD is demoralizing and begins to take a toll.

On the offensive side of the ball the Giants need what they have needed since Tiki Barber retired; a consistent, durable runner who can take the pressure off what is a one dimensional offense now.  The Giants have lacked a real run threat and resigning Brandon Jacobs is not the answer.  For all his size and power Jacobs is a disappointing runner.  Sure, he has his moments but he is inconsistent as are all the current running back. Fullback Henry Hynoski is a fine blocking back but doesn’t have a premier runner to block for.  David Wilson and Michael Cox are not franchise players and are prone to fumbles and miscues.  Absent a viable running game to keep defenses honest, Eli Manning must carry the entire offensive burden on his shoulders and runs the risk of taking a pounding from defenses aware of the lack of a running threat.  Eli is in his tenth season and keeping him protected from injury is especially challenging in an all too predictable offensive scheme.

Defensively the Giants lack what had historically been their identity and strong suit, a tough, aggressive linebacker corps.  They have some marquee players on the front line in Justin Tuck, Jason Pierre-Paul, and, arguably Cullen Jenkins but without strong linebackers able to rush the passer, fill running gaps quickly, and protect the turf in the flats they will continue to struggle and be scored on with troubling regularity. Since the glory days of Giant linebackers such as Harry Carson, Brad Van Pelt, Carl Banks and Pepper Johnson as well as the man who revolutionized the linebacking position, the incomparable Lawrence Taylor, they have not had an All Pro at that position.  The defensive backfield is relatively solid but their collective performance is suspect without fast, versatile linebackers.

As a Giants fan there is nothing about this squad that inspires confidence.  Every game day has the palpable sense of a crapshoot; which Giants team will take the field today?  The good one or the bad one?  Even Tom Coughlin paces the sidelines on the verge of apoplexy of stroke as his faces runs the spectrum of red hues.  Yes, he led his team to two Super Bowl victories in five years and he is high regarded by his peers.  Perhaps the man to assign some blame to is the former Director of Player Personnel and current General Manager Jerry Reese.  Now in his seventh year on the job he has yet to impress with any of his defensive draft picks.  Sure, he was able to snatch some players in the middle rounds of the draft but the New York Giants were always known for their linebackers.  When you review some of the linebackers that Reese allowed to slip through his fingers you have to wonder what the hell was he thinking.

Some will argue that writing an obituary for the 2013 Giants is premature and a lack of confidence as a fan.  This may be so but, we have seen this charade before and the past two weeks have been eerily reminiscent of seasons gone by.  Yes, the NY Giants won the Super Bowl after less than championship caliber campaigns during the regular seasons.  In recent years they have been better known for mid and late season collapses than slow starts.  Both designations are indicative of some underlying current or force at play in their locker room.

No doubt Tom Coughlin will be in his office by 5:30 tomorrow morning breaking down the game film, analyzing the play calling on both sides of the ball.  He and his staff will begin to craft a game plan for next week’s contest on the road against the Carolina Panthers.  Surely they must be as cognizant as every fan is about the fundamental weaknesses of his team.  He cannot coach them all away; he cannot game plan his squad to victory.  Each game is laden with far too many variables for any coaching staff or playbook to account for.  But, at least at this early point in the season we can hope that whatever the malaise or torpor that infects this Giant team will lift.  If not this season will be lost before we know it.

Posted by Brooding Cynyc at 8:02 PM