RYAN HAS ROUGH SOLO IN IOWA 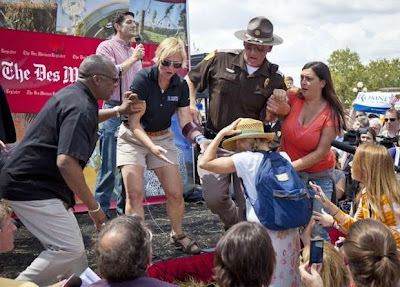 (Aug.13, 2012 – Des Moines, IA)  Mitt Romney’s newly minted running mate Congressman Paul Ryan, from the neighboring state of Wisconsin, made his first solo appearance on the campaign trail since getting the second spot on the GOP ticket on Saturday.  It should have been an easy crowd.  Iowan’s, typically a staid if not bland lot, provided the vice presidential nominee with a very mixed reaction.

As he toured the main fairways with Governor Terry Brandstat and Senator Chuck Grassley he was greeted warmly by many fair goers.  He did seem to enjoy sampling the many fine delicacies the Iowa State Fair is known for including corndogs, chunks of deep fried butter, fried cow heart, swine burgers, boiled bull testicles, corn chips, funnel cakes, sweet corn flavored soda pop, pork tenderloins, corn syrup pie, cottoncorn candy, and corn on the cob.  Between chewing on these snacks, burping, shaking hands, taking a few Tums, and loosening his belt, he also managed to completely duck virtually every question posed by the press traveling with him.

By the time he took the stage to address a raucous crowd he initially appeared comfortable, if not somewhat bloated,  as he began attacking President Obama and touting the budget proposals of his plan and that of Mr. Romney.  Just minutes into his stump speech a small group of hecklers made themselves heard as several protestors at the foot of the stage began shouting at him about his intentions to “cut Medicaid” and “privatize Social Security”.  Several protestors had to be shoved off the stage by members of the Iowa State Patrol including one particularly loud, aggressive buxom activist.  There was a minor scuffle among the protestors and Romney supporters in the crowd as the ISP hauled some of the most vocal protestors away.

Merle Schwackenhacker, a manure farmer from Roiling Gullet said “I’m surprised he came here especially since he’s been blocking passage of the farm bill in Congress.  He oughta know better than tryin’ to keep us farmers from gettin’ our money”.

Ryan’s Congressional and political reputation has been built on his “Budget Plan” that calls for huge cuts in federal spending in areas that would most affect the poor and middle classes while being extremely favorable to big business and the wealthy.  “I tell you what, it’s going to be hard trying to sell that bunk to us older folks” commented Les Flattus a retired hog castrator from Steaming Mound.  Flattus continued, “Folks like me and Mrs. Flattus, ah, she’s my wife, depend on Medicare.  I don’t know what we’d do if it was taken away like that young feller up on the stage wants to do”.

Many in this large crowd representing a true cross section of this important swing state in the American heartland expressed similar concerns and fears about the Romney/Ryan economic plans should they be elected.  While many of those spoken to here today view Romney as a liar, tax cheat, and as a man who will say anything to anyone to get elected, many are also familiar with Ryan’s stances on other issues many voters feel strongly about.  For his entire 14 years in Congress, largely as an unknown “backbencher”, he simply voted with his party along partisan lines and has voiced strong opinions about abortion, social programs, gay rights, immigration, and in particular the size and scope of the federal government in regulatory and corporate affairs advocating less regulation and spending.

Mark Schaffer, a homosexual prison guard from Newton noted, “He is opposed to gay marriage. I don’t like that.  He’s also wants to raise taxes on working people like me.  You know how many extra body cavity searches I have to do just to make a few extra hours in overtime? I don’t mind the cavity searches, actually.  It’s the extra hours that wear me out.  I can’t afford any more taxes”.