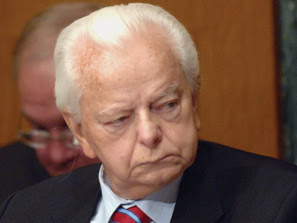 The former West Virginia Klansman and current US Senator
is now the longest serving member of Congress in history.


(November 18, Washington, DC) If one was in search of the perfect example of what is wrong with Congress, you'd need look no further than the quivering, blithering, drooling lump of fossilized flesh that is Robert Byrd. The West Virginia Democrat is serving his ninth six year term in the Senate. He has been a member of Congress since 1952.

Byrd is the perfect example of many of the most glaring faults in the Congress, the faults that have lead to perpetual legislative gridlock, ultra-partisanship and the corrupt art of delivering pork barrel money to constituents. Byrd has more buildings named after him in West Virginia than there are dirty, stinking coal mines. He is notorious for securing funds for West Virginia none of which seem to have ever really benefited the people and greater good of that forever impoverished state.

Prior to his long career as a politician he was a proud member of the Ku Klux Klan. He credits his Klan membership with his self discovery of untapped leadership abilities. Byrd was a tender 24 years old when he joined the KKK and later commented that a high ranking Klansman told him, "You have a talent for leadership, Bob... The country needs young men like you in the leadership of the nation." Years later Byrd recollected, "suddenly lights flashed in my mind! Someone important had recognized my abilities! I was only 23 or 24 years old, and the thought of a political career had never really hit me. But strike me that night, it did." The young Bobby Byrd eventually was elected Exalted Cyclops of his local Klan chapter. Byrd was indeed on his way to a successful career in Congress.

Near the end of World War II Bobby Byrd cemented his truest, most deeply held racist beliefs when he wrote a passionate letter to one of his heroes of the time, Mississippi segregationist Senator, Theodore Bilbo.  In that letter Byrd wrote, “I shall never fight in the armed forces with a Negro by my side... Rather I should die a thousand times, and see Old Glory trampled in the dirt never to rise again, than to see this beloved land of ours become degraded by race mongrels, a throwback to the blackest specimen from the wilds.” One can easily see why this cretin was elected to Congress by the fine folks of 1952 West Virginia.

Once in Washington, the barely literate, in-bred, hillbilly Klansman quickly aligned himself with like minded southern Democrats and began what would become his life’s work - bringing federal money back to his impoverished home state. Arguably, no other Senator in history has delivered more pork to his home state than this racist, bigoted con man. Given the tremendous amount of federal dollars that have poured into West Virginia compliments of Robert Byrd and his ability to use the legislative process and in particular, his knack for attaching amendments and riders to larger spending bills, one would think that West Virginia would be tops in providing education, social services and health care to its residents. Unfortunately, that is not the case; it is nowhere near being the case.

Robert Byrd shunted most of the federal billions he secured to pork barrel projects that benefited his primary campaign donors and his most loyal supporters – the coal mining industry. He has been bought and paid for by the mining industry and related enterprises despite the health and environmental havoc they have induced on that small, mountainous state.

For the better part of Byrd's tenure in Congress his state has ranked near the bottom of the list in education, literacy, public health, and all manner of governmental services that could help lift his constituents out of pervasive poverty, un- and underemployment and a better quality of health care, more accessibility and affordability, that could result in a better quality of life and infant mortality rates. Byrd's only “constituents” are his corporate benefactors; the corporate donors who have assured his incumbency so he could protect their narrow, selfish interests. For all his 56 years in Congress what legislative measures has he authored or sponsored that have had any positive impact towards the greater good? You'd be hard pressed to find a bill with his name that meets that criteria. As Byrd has spent decades enriching himself and his corporate benefactors, West Virginians have continued to suffer, mired in profound illiteracy, obesity, alcoholism, high rates of teenage pregnancy, methamphetamine addiction, incest, bestiality, joblessness and a lack of good cable TV service.

Byrd is the living embodiment of the drastic need for term limits. It has been years since he has been in any way effective. His physical and mental health have steadily declined noticeably over the course of the last 15 years or so. One close, long serving aide to the Senator, speaking not for attribution revealed, “It is a real chore to get him going in the morning. A great deal of effort goes into making him able to get to the Capitol. We have to pump him full of Geritol, Red Bull, Ex-Lax, B-12 and Milk of Magnesia. Some days he demands a shot of moonshine. He is often incoherent and combative in the morning so sometimes we have to add a sedative to his morning cocktail. We have a group of four aides who are assigned to him and are close by him at all times he is in public. Lately, he has had more frequent episodes of urinary and rectal incontinence. He can be a real handful.”

One of the most troubling aspects of this old coot's longevity in Congress is that in this day and age of terrorist threats, Byrd is the third in the “line of succession” to the Presidency positioned behind The Vice President and Speaker of the House. Even some of his closest friends in the Senate like the ferret-faced, chinless, spineless wonder Mitch “Little Bitch” McConnell express great concern about Byrd's position in the Presidential line of succession. “I've known Bob since I came to Washington. We share many deeply held racist and conservative views even though he sits on the Democrat side of the aisle. After 9 11 we all became very aware of issue related to security and continuity of government. God help us all if Bob ever became President due to highly unusual circumstances. It would be a disaster”, said McConnell.

Today is Byrd's 92nd birthday and the addled, demented Senator shows no signs of slowing down. The lesson that should be extracted from his career is the absolute need for term limits and campaign finance reform. There are many other Byrd's in the making; seniority insures incumbency and when a politician answers only to his corporate sponsors and donors, they are essentially useless in the legislative process as we are now witnessing in the health care reform efforts. Not one Republican member voted for the bill to be debated because they are secure in their incumbency. What America needs is an infusion of new blood in both Houses of Congress so that there will never be another Senator serving for over 50 years. Clearly Byrd is not what our Founding Fathers intended when they crafted a legislative branch of citizen-statesman. We limit the term of our President, isn't it about time we allow for the fossilized, ossified, senile “lifers” in Congress, life long politicians who have become wealthy in public office at the expense of the American people and legislation that could address the concerns of the majority of the populace.