SID JACKSON WANTS TO
“GIVE BACK “ TO THE COMMUNITY 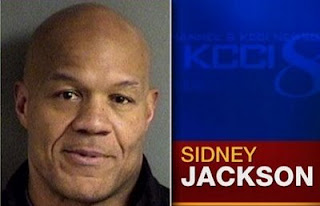 
(March 16, Iowa City, IA) The twenty year veteran Iowa City police officer arrested for drunk driving last month resigned his position on March 9, 2009. The disposition of the other charges that may or may not be pending including resisting arrest, interfering with official acts, and assault on a peace officer, remain unknown at this time. What is known and highly disturbing is that Jackson’s official resignation protects his pension. The fact that he will receive his full pension after a career marred by a wide variety of improprieties while conducting police business, has evoked outrage among many of the citizens of Iowa City.

In a move that many here are calling “bold” and “the least he can do”, Jackson is personally sponsoring and will lead a “Pub Crawl” on St. Patrick’s Day. The event is certain to draw a large crowd of drinkers many of whom have been arrested by Jackson over his time with the ICPD. The event is being called the “Sid Jackson Memorial Pub Crawl, Sprawl and Brawl.” According to the only source close to Jackson the event is intended to, “Help Sid repair his image here in the community.” Some residents say it will take much more than sponsoring a drunken event for Jackson to begin to repair his trashed image while others say it is a good “first step”.

Local bar and pub proprietors had expressed concern that since this St. Patrick’s Day falls during the Spring Break for the University of Iowa, that the absence of student revelers would hurt the local bar and pub economy. Now that Jackson has “stepped into the breach”, many say that, “he alone will make up for at least two dozen imbibers, maybe more.” Chubs Cohan, the owner of a popular downtown drinking spot said, “Sid can consume inhuman amounts of hard liquor. I have seen him myself drink whiskey, vodka and aperitifs until he was barely conscious but still able to drive.”

Jackson is reportedly taking some of his controversial pension money to bankroll the entire event. His one remaining friend said, “Everybody that shows up for the Sid Jackson Memorial Pub Crawl, Sprawl and Brawl will be able to drink free all day, all night or until they are rendered comatose. Sid is really looking forward to drinking with the locals and the students many of whom he has despised for decades.”
Participants are to gather at 5:30 AM tomorrow morning on the corner of Gilbert and Washington Streets on the corner across from the police station. Souvenir t -shirts and coozies will be given to the first 600 participants.

Iowa City police officials have already alerted the Iowa State Patrol that Jackson will be out power drinking tomorrow. A spokesmen for the ISP said, “We will be out in force tomorrow to monitor this Jackson drink-a-thon. We have already contacted the Iowa National Guard to stand by if we need re-enforcements. Based on our previous experience we know if Sid is out carousing and drinking there is sure to be trouble. We are ready for anything he might try to pull, and we will use all legal measures at our disposal to reign him in if he goes berserk”. Governor Chet Culver has said that when Jackson is drinking he poses a “clear and present danger” to the citizenry of Iowa City. As such, the Governor has authorized us to implement some of the statutes of the Patriot Act to subdue Jackson if the circumstances warrant it.” According to a source in the State house speaking not for attribution, “The Governor would not hesitate to have Sid sent off to Guantanamo Base Detention Center as a ‘public enemy combatant’ if he is arrested on St. Patrick’s Day.”